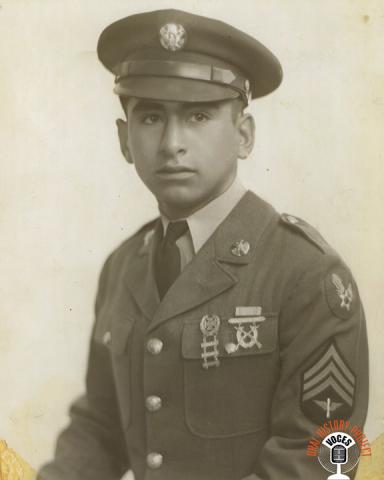 The 66th bombing mission that Sator “Sandy” Sanchez flew during World War II turned out to be his last.

On March 15, 1945, just days before his 24th birthday, Sgt. Sanchez's B-17 was shot down over an oil refinery in Ruhland, Germany. Sanchez was the only member of the 10-man crew who did not make it out of the plane before it crashed into the ground.

Sanchez received numerous honors for his combat heroism. After his death, a school, a park and an Air Force base dormitory were named in his honor.

His nephew, Julio Cervantes, provided information about his maternal uncle to Voces, relaying information told to him by his mother.

“My mother told me a story about Sator, how he loved flying,” Cervantes wrote. “As a boy, he would ride his bike for 10 miles to the airport just to watch airplanes land and take off for hours.

“I think this is why he joined the Army Air Corps,” he added.

Sator Sierra Sanchez was born in Joliet, Illinois, 40 miles southwest of Chicago, on March 21, 1921. His early life was fraught with loss: According to an online article by Air Force historian Kevin Rieders, Sanchez's mother died of tuberculosis when he was 2 years old and his father was shot and killed in 1929. He and his older sister were raised by their stepmother, Joaquina, until she too died in 1934. They later moved in with their stepgrandparents.

After high school, Sanchez worked for a while in a Civilian Conservation Corps camp before enlisting in the Army on Dec. 20, 1939, at Camp McCoy, Wisconsin. He was initially assigned to the 7th Infantry Division in Washington and sent to Fort Ord, California.

In 1941, Sanchez was transferred to the Army Air Corps at Moffett Air Field. He volunteered for gunnery school. He then attended airplane mechanic school and became a maintenance machine inspector at Merced Army Airfield, near San Francisco.

In March 1943, Sanchez stopped an empty runaway plane that was headed toward a crowd of people and other planes. Sanchez averted a catastrophe by climbing into the moving plane, turning off the ignition and pulling a lever to slow the plane as it crashed into a parked and empty plane. For his quick thinking and heroism, Sanchez was awarded the Soldier's Medal.

On Sept. 13, 1943, Sanchez was assigned to the 8th Army Air Force, 95th Bombardment Group, 334th Squadron in Horham Airfield, in southeast England. There, he served as a tail gunner and later as a top turret gunner. Sanchez became a flight engineer on a B-17 airplane, from which he shot down six enemy fighter planes.

Sanchez completed enough missions to retire from combat in 1944 but volunteered for two more months to wait for his pal and co-pilot, Lt. Roy Giles. In June of that year, Sanchez returned to the U.S. and spent some months as a gunnery instructor before requesting to be sent back to combat.

In November 1944, Sanchez was assigned to the 15th Air Force, 301st Bombardment Group, 353rd Squadron in Lucera, Italy, where he flew 22 more missions until his plane was shot down over the Ruhland refinery. He was officially declared killed in action in October 1945.

A U.S. military report said the Germans recovered his body not far from the crash site and buried him. However, according to Rieders, the historian, it is possible that his body was interred as an unknown soldier in one of the U.S. Army’s European battle cemeteries.

In six years of service, Sanchez earned numerous accolades, including the Silver Star, Distinguished Flying Cross, Soldier's Medal, an Air Medal with 10 oak leaf clusters, two Purple Hearts and numerous citations. His valor was recognized by his comrades and his community: an elementary school and a park in Joliet are named after him, as is a dormitory in Spangdahlem Air Base in Germany.

In addition to the medals, the Army Air Corps recognized Sanchez’s remarkable career in a unique way. A new B-17 was emblazoned with a caricature of Sanchez, the name Smilin’ Sandy Sanchez and the number 44 – a reference to the number of missions he flew with the 8th Air Force.

This tribute was based on information provided to Voces by Julio Cervantes, nephew of Sator Sanchez.