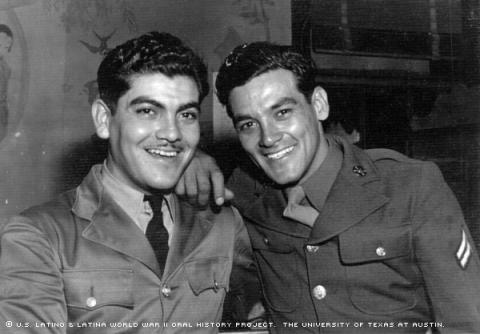 For most of his life, Sam Casarez, an Austin, Texas, native who served as a Merchant Marine in World War II, wasn’t accorded the privileges and benefits of veterans.

Today, 13 years after the Merchant Marines were given full military benefits, Casarez enjoys retirement. The Merchant Marines, who carried vital materials across oceans, made up the invisible backbone of the Allied military forces. Although one in 26 Merchant Marines died in combat during the war, the federal government regarded them as a commercial organization rather than military until 1988.

During the war, Casarez transported military cargo across the globe and docked in ports from Cuba to Japan. With parents who came to the United States during the Mexican Revolution, Casarez, who was born in Austin on May 7, 1923, was seemingly made to cross borders and explore new terrain. His father, Jesus Casarez, known as "Jesse," had worked as a policeman in Monterrey, Mexico. Jesse and Maria Chavarria Casarez immigrated to the U.S. in 1912. Jesse eventually developed respiratory problems. At first the family thought it was asthma; later, they associated his health problems with the dangerous conditions in the flour factory where he worked. The elder Casarez died in 1930, leaving behind a wife and five children.

The Casarez family worked at dairy farms for several years, with Casarez attending a series of elementary schools. He enjoyed dancing, picnics, baseball and hunting. His mother attempted to provide for the entire family; however, after 5th grade at John B. Winn Elementary, young Casarez dropped out to work full time at a dairy, a line of work he eventually tired of.

"I learned that cows don't take holidays or rest on Sundays," he said.

He labored as a truck driver and deliveryman for an Austin-area lumber company. He also washed and cleaned rugs at a laundromat.

At the age of 19, Casarez decided to join the Marines. His oldest brother had died in an accident while serving in the Army Air Corps; his other brothers were already in the Army.

After his friends got into an argument with the Marine recruiter in the enlistment office, Casarez went across the street and saw a sign advertising the Merchant Marines. Knowing the significance of international events and the growing concern about the role of the U.S. in the war, he decided to join. After going to San Antonio for a physical, he was sent to St. Petersburg, Fla., for training, where he was schooled in the art of operating naval vessels.

Casarez was trained to operate machines in engine rooms, specifica1ly the oiling of the giant pistons that power the ships. His first mission involved working on a tugboat that was transporting goods to Cuba. Before Fidel Castro's revolutionary transformation of Cuba, the U.S. had a brisk trade with the island nation. Casarez's ship was taking goods to a Cuban port and returning to Miami with a load of sugar. In Cuba, Casarez's Spanish-speaking skills were particularly useful.

Later, he was assigned to a boat transporting 128 train-car loads of ammunition across the Atlantic to the Allied Forces in Europe. It would be the most dangerous mission of Casarez's life. Stocked with ammunition and trucks and trailers lashed to the ship's deck, the boat left from New Orleans and stopped in New York to pick up a naval convoy of 68 ships. With the ships in tight formation, the crew set out across the choppy waters of the North Atlantic.

The Merchant Marine ship was only armed with a 3-inch gun, which, according to Casarez, would shatter boat windows whenever fired. Encircled by Navy ships, Casarez could hear the explosions of depth charges being dropped on enemy submarines. The explosive jolts rocked the engine room where he was stationed. In addition to Nazi U-boats, the convoy encountered brutal storms in the North Atlantic. Once, the high, rolling waves caused the deaths of two of the boat’s crew and snapped cables holding the trucks and trailers on the deck of the ship. The entire cargo of trucks and trailers was lost. Fortunately, the ammunition remained intact and, after the ship crossed the English Channel, it was shuttled to waiting troops by amphibious trucks.

More than 6,000 Merchant Mariners died in World War II, and they lost a total of 733 ships. Nearly 600 men were made prisoners of war. Life in the Merchant Marines was difficult. Sleeping in life jackets and bouncing from cargo boats to tankers, Casarez led a transient life. With only occasional stops in the U.S., where he would often attempt returning to Austin or a rendezvous with his brothers, Casarez traveled from North Africa to the Middle East to all parts of Asia.

He recalled being in San Francisco on VE Day and being in Hawaii on V J Day. "Those were huge parties," he said.

Casarez came back to Austin, where he was living at the time of the war's end. He was officially discharged in November of 1947. The next month, Casarez got a job at the Capital Linen Service as a truck driver. He was able to overcome racial discrimination and slowly work his way up the chain to become a plant manager. His advice for dealing with bigotry: "Just ignore the hell out of it."

After 18 years, Casarez quit because of what he considered unreasonable production demands.

"There was too much of an emphasis on the bottom line", he said, and it made the linen industry dehumanizing and brutal. After he left, he worked for other linen companies as a plant manager, and for a while he owned a furniture store. He finally decided to focus on his wife, Mary Candelas Casarez, and two sons, Jesse and Sam Jr.

He has been retired for 13 years now, and for a time, enjoyed participating in the Knights of Columbus and traveling with Mary. Only lately has time and double knee-replacement surgery slowed down the world traveler. He enjoys spending time with his five grandchildren.

"The Merchant Marines allowed me to grow in knowledge as I read many novels while at sea," he said. "Going through the Suez and Panama Canals were highlights of my service."

Still, he acknowledges, because the Merchant Marines weren’t granted GI benefits when he was a young man, he lost out.

"All my friends who were in other branches of military were able to get college educations and housing benefits," he said. "I was not afforded these breaks."

Casarez was officially made a veteran in 1988, when then-President Ronald Reagan recognized the Merchant Marines for their contributions to WWII. His struggles as a member of the Merchant Marines made a lasting, if understated and less visible, contribution to the American battle efforts. While not often celebrated in the same way as other members of the armed services, Casarez did his part to grease the wheels of the American military machine.

"Without the Merchant Marines, they wouldn't have had a damn thing to fight with," he said.

Mr. Casarez was interviewed in Austin, Texas, on August 21, 2001, by Porteskcia Kelly.