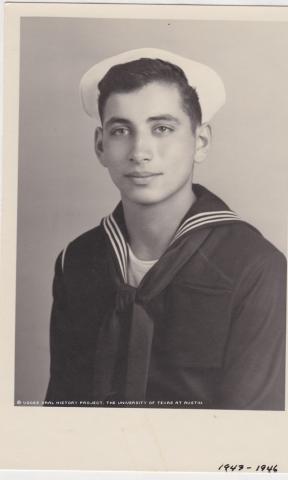 Throughout his service in the U.S. Navy during World War II and for the rest of his life, Ruben Suarez had a strong understanding of diversity and the need to persevere to achieve his dreams.

Suarez remembered the difficulties of growing up during the Great Depression. High school teachers often urged Latinos to prepare for manual labor jobs, instead of college.

His first dream to become reality was entering the Navy. While many young men were being drafted to fight in World War II, Suarez enlisted in 1943, two days after his graduation from Tucson High School in Arizona.

"I wanted to be in the Navy so bad that I could taste it," Suarez said. "I envisioned myself being a part of those beautiful ships."

Basic training consisted of just 21 days of what Suarez described as running around and jumping, in order to hurry more men into battle. After basic training, he scored the highest in his unit on a test for promotion. He did get the promotion, but not before it was questioned by a higher ranking officer who wanted to offer the promotion to somebody else because Suarez was Hispanic.

"Why do we have to promote him?" Suarez remembered the officer asking.

Once he began his service on the USS Pennsylvania (BB-38) as a signalman third class, Suarez said there was no segregation, although he was the only Latino in his company. In the face of Japanese torpedoes, gunboats and kamikaze attacks by their fighter pilots, survival was paramount.

"I enjoyed living on the ship and liked my job as a signalman," Suarez said. "I was scared the first time we saw action. But I got used to it."

The USS Pennsylvania, the U.S. Fleet flagship at the time of the Pearl Harbor attack, became so adept at shooting down enemy planes and gunboats before they could inflict serious damage that the battleship's crew received a Navy Unit Commendation for its service in the South Pacific.

"Our boat was fortunate, and we were able to knock them out before they hit," Suarez said, referring to the Japanese kamikaze pilots. "As signalmen, we didn't have anything to do with guns, but we were right there. We got to see everything."

Suarez, the son of an immigrant tailor and a seamstress, lived a humble but happy childhood in Tucson, Ariz.

His parents, Francisco and Carmen Suarez, made all the clothes that their five children wore and had to be careful in rationing out the food to ensure everybody got an equal amount. Despite the economic challenges, Suarez said he didn't realize his family was poor until he was older.

"We didn't have very much money; what we had was love and enthusiasm for life," Suarez said. "We didn't know any different. We made our own fun."

His father would often barter with local businesses, offering custom tailored clothes in return for their goods or services. Suarez's younger sister got dance lessons that way.

Suarez had two brothers, Mario Rene and Eugene Frank, and two sisters, Grace and Lettie. Both his brothers were veterans and both graduated from the University of Arizona.

Suarez spent most of his free time after school playing baseball in the desert with his brothers and friends, but every so often his parents would have a special treat for the family: a trip to the movie theater, which was Suarez's favorite activity when he was growing up.

"I could just sit in a movie continuously and just dream of going places," Suarez said.

When Suarez was nine years old, he applied for his first job, selling and delivering newspapers. At first, the owner of the company was skeptical about hiring such a young boy. But eventually he found a way to take Suarez.

Suarez's mother, a woman who taught herself to read and speak English so she could obtain a U.S. residency green card, constantly urged the children to excel in their education, always stressing the importance of college.

Living up to his mother's expectations proved difficult, however, because the teachers at Tucson High School in those days never told the Latino boys and girls about college. Instead, they seemed to steer Latinos toward manual labor, which Suarez never envisioned himself doing. Suarez said the teachers didn't seem to care whether the Latino youngsters graduated.

"I didn't know what I wanted to do, but certainly didn't want to go out there and be a carpenter," Suarez said.

Suarez enlisted in the Navy on June 11, 1943. But it wasn't the honor of defending his country or the glory of armed combat that spurred him on. It was a deep admiration for the high seas and the vessels sailing on them that motivated Suarez.

"I didn't know where Pearl Harbor was," Suarez said.

He earned seven bronze stars and a Navy Unit Commendation ribbon for having served on the USS Pennsylvania.

Unsure of what to do with his life, Suarez followed his mother's advice and used his GI Bill benefits to go back to school. He worked as a janitor and a shoe salesman while attending Cox Commercial College and studying accounting in 1947.

On his first day of college, he recalled, a professor told a lecture class of 400 students that half of them didn't belong in college.

"Why would he say that?" Suarez wondered. "That motivated me: I'm not going to fail."

Suarez enrolled at the University of Arizona in 1949 and went to work for the City of Tucson in 1950 while pursuing his business administration degree. He earned his degree in December 1985. He continued to work with the city and served as interim city manager according to the Pima County Library, from Aug. 1992 until July 1993, after which he retired. At the time of his interview, he was living in Tucson with his wife.