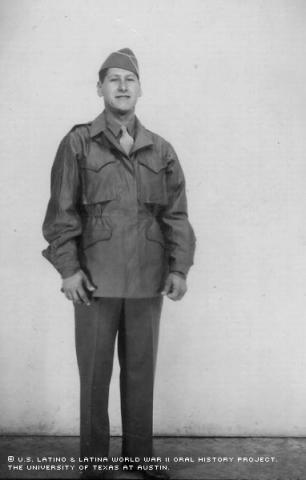 Looking back, Casillas recalled being excluded from opportunities given to his classmates and still asks, "Why wasn't I included in that?"

As one of thousands of Mexican Americans to participate in World War II, Casillas fought not only for the safety of his nation but also to pave the way to equal opportunity in education and other government institutions for minorities.

"It had to change the world," Casillas said.

His own world would also change: he would see more discrimination in the military, yet remain loyal to his country; and he would recall the thrill of passing under the Golden Gate Bridge after the war, coming home to a new life with greater opportunities.

Casillas was born in Chula Vista, Calif. on May 17, 1921. His parents had immigrated to the United States in 1917. His father supported nine children with his job at a local chemical plant in the farming community of Chula Vista, Calif. As a youngster, Casillas helped his family and played Little League baseball. His summer months were spent working as a farm laborer. During the Depression, his father's stable factory job allowed his family to avoid some of the economic hardships other families faced.

Casillas grew up in a time when segregation persisted in the school system. In Southern California, he remembered how he and his Mexican classmates were routinely overlooked by the teachers.

"I noticed the teachers didn't spend as much time with the Mexicans," he said. "They didn't spend the time with you, but we overlooked it because we didn't know better."

At the age of 17, he dropped out of school to help his family financially. His father had tuberculosis and would succumb to the illness in 1943. Casillas worked at an S.D. Construction company that would later build airplanes. When the United States first entered the war, Casillas was exempt because he was a defense plant worker.

Casillas vividly recalled the shock he felt upon hearing the news of the Pearl Harbor attack.

"Everyone was amazed," he said. "It was unbelievable to fathom the fact they would hit a country as large as the U.S."

In 1944, he was drafted, forcing Casillas to leave his first wife Zoa St. Clair, and his son Ruben Jr.

"I felt that it was my duty as a citizen," he said. "I felt that this was a war that anyone who cared for survival had to go and fight...."

Casillas, who was one of four brothers to serve in World War II, proudly took on his duty as an American citizen and served his country in the Navy. He signed up for the Navy to be stationed near home. However, because the Navy positions were filled, he was sent to the Army and immediately taken to basic training at Camp Roberts, Calif.

While in the Army, Casillas served in the Pacific Theater.

Despite being a patriotic citizen, Casillas encountered discrimination.

"I found that the first moment I was at boot camp - I began to see how they separated you," he said.

Casillas continued to find prejudice among the military troops on several occasions.

"Those people were very racist," he said. "There was discrimination, yeah. ... I was told by my first sergeant that I would never go anywhere in the division because I was a Mexican. ... Mexicans always got the kitchen detail or guard duty. I knew that was why they were doing it."

Despite the unfair treatment he feels he received, Casillas remained loyal and continued to fight valiantly for his country.

"Your lives depended on each other," he said. "To me, race or religion did not matter. Your buddy next to you could be your life saver."

He clearly remembers seeing his fellow servicemen break down under the pressure of war. He, instead, focused on thought of his family back home.

"Thinking about my family helped energize me because I thought you had to get back home to that," he said.

Casillas platoon was in the Philippines preparing to hit the northern tip of Japan in 1945 when the news of the atomic bomb reached his commanding officers. The dropping of the atomic bomb on Hiroshima on August 6, 1945 and Nagasaki three days later precluded the invasion of Japan. Japan surrendered unconditionally on September 2, 1945.

"If they hadn't, maybe I wouldn't be here," Casillas said. "If we had gone to Japan, it would have been a massacre."

The moment Casillas heard the war was over is something he'll never forget.

"I felt elation, jubilation, disbelief, happy it was happening," he said. "We were going home. It was a great feeling that we wouldn't have to face any more bullets."

Casillas recalled the overwhelming emotion of returning home after the war.

"It's a feeling I'll never forget," he said. "The ship was going under the Golden Gate Bridge on my birthday ... coming home. If you live to be a hundred, you'll never forget stuff like that."

After being discharged in 1946, Casillas used the GI Bill of Rights to finish his high school diploma and take some college courses.

The war had a great impact on Casillas and allowed him to get a larger view of the world. Casillas said he is proud of the fact that he fought for his country and proud of the thousands of other Mexican Americans who fought for the same cause.

Casillas said he believes that Mexican American troops did as good a job in the military as any other soldier. However, Casillas does not believe their contributions have been properly recognized.

"I think it's too bad that it has taken so long for this country - the government - to realize the effort that were put in by Latinos during World War II," he said.

Casillas thought Mexican American participation in the war would help end discrimination against all US citizens and residents. Although he believes that the lives of Mexican Americans have improved dramatically since the war, he still believes there are steps to be taken.

"There are still a lot of things that need to be changed," he said. "We always though time would change all, but it has been very slow."