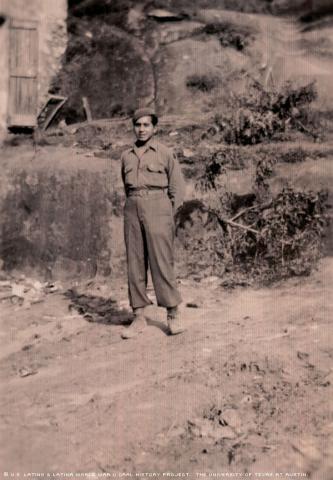 Gunning down loose poultry with his military-issued M1 rifle just to savor the sweet taste of fried chicken and collecting cowpie patties to burn to keep away the nip of mosquitoes -- these are some of the memories Roque Riojas has of his time with the 135th Regiment, 34th Infantry Division, fighting in Africa and Italy during World War II.

These stories didn’t adorn Riojas’ uniform with medals like the Purple Heart and Bronze Star, a Campaign Ribbon with five battle stars, and his most prized decoration, the Combat Infantryman Badge, which Riojas earned during his 611 days in combat. But these are the memories he prefers. He does not like to recall combat.

“He (his fellow soldier Kenny) cut it up and fixed it up, and between him and I, nobody else, [we] tore into that chicken,” said Riojas. “At that moment I said the war is 10,000 miles away. It was peaceful, just him and I.” The campsite scene took place just after the Battle of Monte Cassino in January 1944.

Riojas was drafted into the Army in November 1942, nearly a year after the bombing of Pearl Harbor. It didn’t come as a surprise to Riojas, who said he wasn’t scared but treated it as a new experience.

Despite being drafted, Riojas hails from a military family: a father who was a commander during the Mexican Revolution, brothers that fought in the Battle of the Bulge and Korea, a son in Vietnam, and a grandson in Desert Storm in Iraq.

Training took place in California before shipping out across the Atlantic to North Africa, where Riojas was assigned to the 34th Infantry Division.

“I was supposed to be [in California] for 13 weeks but they cut us short because, I suppose, they needed people, so they shipped us away, I think, on our ninth week,” said Riojas. “I left, and I didn’t see anyone until I got back.”

Appointed to Communications Section, Riojas was responsible for radio and walkie-talkie equipment. Often he would have to run through combat to string telephone wire and engage enemies encountered along the way.

Riojas fought from the coast of North Africa to the foothills of the Alps in northern Italy. His campaigns brought him to battles in Sidi-bel Abbes, Salerno, Monte Cassino, and Anzio.

In addition to combat, Riojas witnessed the terrible conditions of starving Italians in Salerno scavenging and sorting food scraps thrown away by American soldiers.

“I don’t think too much about it anymore, of course. It’s so long ago now. It’s personal memories. So I just keep quiet,” said Riojas. “I saw some things there that [are] hard to forget.”

Despite his decorations Riojas never gained rank above private first class. Riojas said that discrimination might have been a factor when he wasn’t chosen to replace his fallen sergeant.

“I would have been next in line, not only in time with the outfit but also in combat experience. But our lieutenant was from North Carolina, and [the outfit] had a new recruit that hadn’t been with us very long and he was from Georgia,” said Riojas. “So guess who got to sergeancy?”

Riojas was honorably discharged in October 1945, a month before his unit returned, since he had acquired several points during war allowing him to do so. Had he known that his division was coming home that soon he would have returned with them, he said.

Returning to Kansas City, Kan., Riojas was met by a one-man welcoming committee and an apathetic community.

“Came back to Kansas City. Nobody to greet me, not a soul. I’m walking down the street with my pack, and here comes a man towards me. That was my welcoming committee, one man,” said Riojas. “The next person I saw was my dad at the house, and the only thing he said was, ‘Your mother’s inside.’ That was my welcoming.”

After readjusting to civilian life, Riojas took advantage of the G.I. Bill and went to trade school to learn radio and appliance repair. He formed a family and worked in Texas, prospected in Mexico, and worked with the Santa Fe Railroad for 19 years.

After Riojas’ wife, Elizabeth, died in 2006 from cancer he was involved with veterans’ associations such as the Veterans of Foreign Wars, American Legion and Disabled American Veterans. He is the Vice Commander of the American G.I. Forum and a member of the color guard.

Riojas completed two years of high school before dropping out to work to help support his family, first as a delivery boy and then packing animal parts at Armour’s Packing House.

“At the packinghouse they naturally gave us a check and I would sign the check and give it to my mom and say, ‘Here, mom. Just give me $5 if I need it,’ and she kept the rest of the money,” said Riojas.

This wasn’t an issue for Riojas, whose mother made dresses for extra money. Meals most days during the Great Depression were tortillas and beans.

In 2004, Riojas was invited as a guest of then-President George W. Bush to attend the dedication of the World War II Memorial in Washington D.C.

Riojas’ modesty over his wartime service can be seen in the way he stresses that accomplishments were achieved as a team, not as an individual and in his personal philosophy of making others laugh and smile.

“I don’t dwell too much on the past anymore. I think about tomorrow,” said Riojas. “I love to see people smile or laugh. I don’t like to see people go around with a long face. And that makes me feel good.”

Mr. Riojas was interviewed at Donnelly College in Kansas City, Kan., on June 17, 2010, by Valerie Martinez.