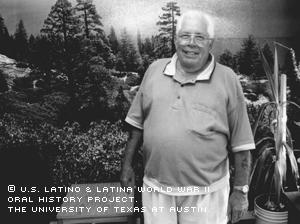 Robert Soltero can barely remember details of the Depression, but his memories of discrimination during that era remain vivid.

"In those days, you couldn't even go downtown," said Soltero, who grew up in a west-side community of Kansas City, Mo., in the 1930s. "We [Latinos] had to stay in our own background."

Soltero's father, Luis Soltero, worked three jobs, including ones at the Cudahy Packing House and a hotel room service to help support Soltero, his older brother, Tony, and sister, Connie.

Soltero attended elementary school at Our Lady of Guadalupe, a Catholic school in Kansas City.

"We couldn't speak Spanish in the classrooms because the nuns insisted on us to speak English," he said.

Soltero recalls getting into fights as a teenager on account of discrimination in Kansas City. He was prevented from going into theatres and clothing stores.

"The cops used to pick on us for no reason," said Soltero, who fought with both the police and Anglo teenagers.

He says he chose to go into the restaurant business, like his father, so he’d be allowed downtown.

Soltero was only 17 when he and two of his friends decided to enlist in the Navy in November of 1944: He says he wanted to distance himself from the discrimination he faced as a Latino living in his hometown.

"Back in the '40s, there was a lot of prejudice going on in the west side, practically all over Kansas City," Soltero said.

Soltero felt there was some discrimination in the service, but, overall, the war had a positive effect on the opportunities available to minorities.

"I think after World War II it really helped because it opened the doors for a lot of people and education got better," he said.

Once in the Navy, Soltero, an electrician's mate third class, attended demolition and gunnery school at Fort Pierce in Florida. He was separated from his friends after training when they were sent to New York City, and he was eventually stationed at Coco Loco NAS in Panama City, Panama, in 1946. His language skills secured him a position conducting shore patrol, but he was quickly moved into the special service, where he worked in civilian clothes as an interpreter in Central America.

"I think the job that we were doing related to the total thing. … We got to pick up a lot of people," said Soltero, referring to arresting people, and applying his job to the war effort as a whole.

Late in 1947, Soltero served on the USS Pecatonica, a gas tanker that ferried back and forth from Jacksonville, Fla., to Baton Rouge, La. He was a stranger when he came home on a 30-day leave. His little brother, John, was even hesitant to open the door, because he didn’t recognize his older brother.

After his discharge in 1948, Soltero stayed in the reserves for four more years. While many of his friends took advantage of the GI Bill, he chose to return to the hotel restaurant business after marrying Carmen Tinoco on Jan. 28, 1950. Soltero says he got his education while he was in the service and felt as though he didn’t need to go to college.

"I got to meet all sorts of people [while in the military]," he said. "I got my education that way."

The Solteros moved away from the west side to raise their two sons, Gary and Larry, and daughter, Jo Aann, in South Kansas City. However, they returned years later, after Soltero’s parents had passed away, and moved into the house in which he grew up.

Today, Soltero celebrates his place in the Mexican American community of Kansas City. He’s a member of the American Legion, the world's largest veteran's organization. And he has served 10 years on the board of directors for the Guadalupe Center, Inc., one of the nation's first social service agencies for Latinos, started in 1919 by a Catholic women's club. He was a sponsor of the center's culinary arts school and Alta Vista Charter High School, established in 1990 in response to high dropout rates in the community.

"This to me was one of the biggest things I was involved in," Soltero said. "I'm so proud to have been involved in it; I loved it."

His work with the Guadalupe Center continued, involving mostly youth activities: He taught golf to children ages 8 to 17, volunteered his time to cook for fiestas and did food-making demonstrations at the culinary arts school. Soltero had worked his way up to manager before retiring after 52 years in the hotel restaurant business.

Three days a week, he worked as a starter marshal at Swope Memorial Golf Course in Kansas City. He was a caddy as a young boy, started playing golf when he was 15 and spent more than 20 years working at the course.

Soltero says he’s as proud to be an American as to be Latino, and that he celebrates his culture and has tried to instill in his children a respect for their Mexican American culture.

"I've never forgotten where I came from," Soltero said. "I'm proud of what I am."