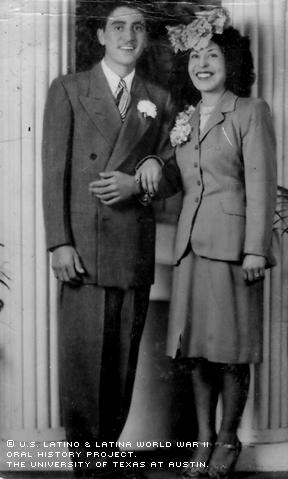 One night in December of 1941, the world changed for Robert John Chavez. He was in the 9th grade and a 15-year-old teenager, attending a dance marathon, when word came over the radio that the Japanese had bombed Pearl Harbor.

Not long after, Chavez dropped out of school and went to California, where he worked in a shipyard, assisting in the construction of U.S. warships. He worked there until he was drafted on Sept. 4, 1944.

Chavez originally wanted to go into the military as a Marine, but the Selective Service officials told him the Marines were at maximum strength. He was given a choice of the Navy or the Army, and he elected to become a soldier.

Chavez started his training at Fort Bliss in Texas, and then transferred to Camp Roberts in California. From Camp Roberts, he went to Fort Ord, Calif., and then to Fort Lawton, Wash. Chavez's last stop was Hawaii, where he and the other men with him received last-minute jungle training. Chavez says one of the most valuable lessons he learned is how each plant in the jungle had a different taste and which ones were deadly to eat.

Chavez was sent to Okinawa as part of Company B, 2nd Battalion, 381st Infantry Regiment, 96th Infantry Division. He says he doesn't like to talk about his time in the service.

"It [Okinawa] was terrible," Chavez said.

Of the 120 men in Company B, 14 were killed in action. Chavez himself was never wounded.

"I came close," Chavez said, speaking of the time a spark from an exploding grenade set his belt on fire. Another time, Chavez was shot in the arm, but he remembers the bullet simply ripping through his sleeve without tearing any skin.

Chavez also remembers the difficulty of life in the jungle. When they were out in the field, he recalls, they had to dig two-man foxholes barely five feet away from each other. Each man would have to pull a one-hour guard shift while the other man slept.

Chavez says because they were afraid to talk to one another, with the enemy so close by, they’d signal shift changes by throwing small rocks. Officers in the field weren't allowed to wear their rank on their uniforms, he says, because they knew the Japanese would target leaders first in an attack. Ponchos and raincoats were issued but rarely worn because they gave off a shine that made the wearer an easy target.

Correspondence to relatives back home was also hard.

"They censored everything," Chavez recalled.

He could never tell anyone where he was or what was happening. He couldn't even write to say who’d gotten killed. If he did, censors would cross it out, he says.

Chavez was born April 14, 1926, in Albuquerque, N.M. He was one of 11 children born to his father, John Chavez, a railroad worker, and his mother, Julia Garcia Chavez, a homemaker.

"We were a very close family," Chavez said.

Growing up in the middle of the Great Depression, his childhood was both good and hard, he says. A typical day for him started early in the morning when he got up to clean the family's yard.

"The neighbors always used to say they knew I was home because the yard was always clean," Chavez said.

Chavez remembers the many things he and his siblings had to do just to have the simple amenities people today don't even think twice about. When it was cold, they walked down to a saw mill near the family home and collected the spare wood so the family would have heat and fuel to cook for their stove. In order to have ice, they had to collect it out of empty shipping containers for beer. Goods like meat, fruits and vegetables were delivered on government trucks and rationed out according to the size of the family. Chavez and his brothers and sisters even had to milk their neighbor's cows.

He served as a technician with the 86th until he was recruited as a paramedic. Chavez says he basically worked as a nurse during his time as a paramedic, assisting doctors with surgeries and other medical procedures. He eventually had to quit, he says, because the sight of blood bothered him so much.

He was in the Philippines for a year before his discharge in November of 1946. He left as a Technician 5th Grade in the Field Artillery of the 86th Infantry Division and received a Bronze Star for his service.

Chavez returned to Albuquerque, where he first found work in a saw mill, then at a news agency, and, finally, as a service coordinator at Sandia National Laboratories. A friend introduced Chavez to Maria Sanchez, and the couple was later married. They eventually had seven children: four girls and three boys. One of their children went to college, the others to trade schools. They’re now married with families of their own, and the couple has 13 grandchildren.

The war took its toll on Chavez, as little to no support existed for soldiers suffering at the time from mental trauma. Today, memories of World War II still haunt him.

Chavez says he and his wife, Maria Sanchez Chavez, don’t sleep in the same bed anymore because he began hitting her in the middle of a nightmare flashback.

"I think [the war] was hell," Chavez said. "I hope we never have to go through anything like that again."

Mr. Chavez was interviewed in Albuquerque, New Mexico, on November 2, 2002, by Erika Martinez.