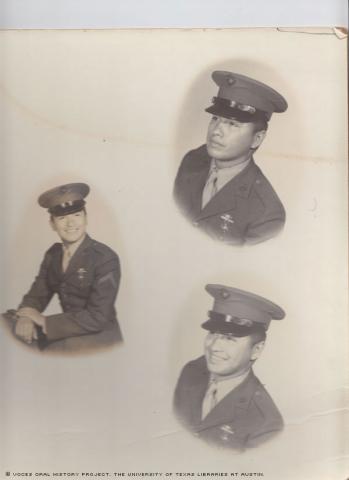 U.S. Marine Corps veteran Richard Perez, the son of a World War II veteran, was in Vietnam for three months, from December 1966 to February 1967. But those three months altered his life forever and led him to advocate for other veterans in his hometown of Houston.

Perez was stationed in South Vietnam as part of the Delta Company, 1st Reconnaissance Battalion, 1st Marine Division. He would go on reconnaissance missions. One night, Viet Cong soldiers surrounded his company. Perez sprang into action, helping to save several of his fellow Marines, but he was injured in the process. His short but honorable military career ended at the Corpus Christi Naval Hospital, in Texas, as he recovered from a bullet wound to his hip.

Spending a year and a half recovering, Perez decided that he could help his fellow Marines by ensuring that, when they returned home, they didn't land in uncaring system. He wanted to make sure their sacrifices were rewarded.

"I dedicated my life to help veterans get their benefits," he said, adding that be also became involved in politics and education.

Perez was born on March 10, 1947, in Houston, the son of Felipe Perez and Hortensia Gutierrez Perez. His father worked at Daniel's Radiators, where he made radiators before joining his brother's band, the Eloy Perez Orquesta, as a guitarist. Felipe's brother Eloy was a prominent figure in the Tex-Mex music scene. He is credited with introducing Tex-Mex music to Houston and passing that musical influence down through generations. Ruben Ramos, an award-winning Tejano musician, was Perez's second cousin.

The younger Perez recalled that, with his father being a traveling musician and his mother being a housewife, the family was poor. But he and his six siblings never went without food, he added.

Growing up in what he described as a barrio of Houston, Perez said that he did not encounter discrimination personally, but it was around. He said he had to go in through the back door of businesses in Bastrop and Elgin in the 1950s. Perez also recalled getting on the bus and seeing the black people having had to sit at the back of the bus. There were separate schools for Mexican children, black children, and white children. As the South reluctantly accepted desegregation, the Mexican children were sent to school with the black children.

Education was a hot button topic with Perez's family. Perez said his family had been in Texas since the 1700s. The family had established itself in the Bastrop County area. Perez's grandfather, Tranquelino Perez, saw the poor quality of life for Mexican-Americans and began to speak out about it. He gathered enough money from the community to establish a school for Mexican-Americans in Bastrop. Perez's father achieved a middle school education before attending upholstery classes at the University of Houston, which had a vocational school after World War II.

Perez attended Betsy Ross Elementary School and Marshall Junior High School, before going to Jefferson Davis High School in Houston. But he was tempted to drop out of high school. He had learned auto detailing in school and was also earning $35 a week, which he considered good pay, playing in his cousin's band, the Neto Perez Orquesta. But his father convinced him to go to summer school at San Jacinto High School, and he realized that a high school diploma would open doors. He graduated from Jefferson Davis High School in 1965.

He had been working for about a year when he learned that one of his closest childhood friends, Joel "Puppet" Tamayo, had been killed in Vietnam. Perez said Tamayo was the first Jefferson Davis alumnus to die in the Vietnam War. The entire school was released from classes to attend his funeral.

Perez began thinking about enlisting. When his draft notice arrived, he chose to enlist in the Marine Corps in June 1966. The idea of enlisting in the military was not a foreign concept to Perez. His father served in the U.S. Army in the Pacific from 1941 to 1945. In a way, the military was Perez's father's first taste of the musician lifestyle.

While awaiting his discharge in San Francisco, Felipe Perez met Desi Arnaz Jr. and would occasionally back the singer up on guitar. That allowed him to get into private clubs. Two of Felipe Perez's friends, Tom Padilla and Vincent Paladia, also were able to get into the clubs because Arnaz would claim that Paladia was the actor Cesar Romero and Padilla was his agent.

Following the guidance of his father and his other family members who had served in the military, when Perez received his draft notice, he chose to go "with the best."

Perez recalled Marine boot camp as an intense experience. Discipline was strictly enforced, and the drill instructors did not hold back in pushing recruits around. But Perez made it through and found himself bound for Vietnam. Before landing, Perez learned that his assignment would be reconnaissance. Perez knew that going behind enemy lines would be dangerous: He and his fellow scouts would have to be stealthy and careful not to blow their cover and attract attention. One night changed it all.

Perez heard the crunching of the grass. Then gunfire rained down on his company. They were waiting to be extracted but their position had been given away and they had to fight to stay alive until help came. Many of his fellow Marines died, but Perez made it through the firefight. Unfortunately, a bullet struck him in the upper hip and exited through his stomach, causing major damage.

"My buddy, Kenneth Deavers . . . caught four rounds across the chest; another round hit his wrist . . . One of those bullets that hit him, one of them [hit him] as he was giving me cover," Perez said. His friend died next to him.

When a Chinook helicopter came to evacuate the unit, "my buddies, thinking that we were both dead, threw his body on top of mine," Perez said.

Perez spent the next year and a half at the Corpus Christi Naval Hospital, in Texas, lying in a bed with thoughts of his friends risking their lives in combat running through his head. He spent six months in a body cast that covered his entire torso down the length of his right leg to his foot.

Though he healed and was discharged from the hospital, his hip kept hurting a lot. Perez underwent two hip replacements before doctors amputated his right leg above the knee. He said he had suffered from unbearable pain and that, once the leg was gone, so was the pain. His injury left Perez 100 percent disabled and completely reliant on the Department of Veterans Affairs to provide a livelihood for him and his wife, as well as health care.

As Perez realized that he would depend on the aid of the military, he realized that there would be thousands of others who also would require assistance. It was the duty of the government to help the soldiers they had sent to fight a foreign war. Perez became an advocate for veteran affairs throughout the state of Texas. He founded or co-founded various veterans' organizations around the city of Houston, including City of Houston Veterans Memorial Park, which is dedicated to veterans of all wars.

He also co-founded Gathering of Eagles, an organizations that promotes patriotism among young people.

Among the organizations in which he was involved were: the Disabled American Veterans, the American G.I. Forum, and the Jefferson High School Hispanic Alumni Association.

Mr. Perez was interviewed by Alexandra Loucel in Houston on April 9, 2011.