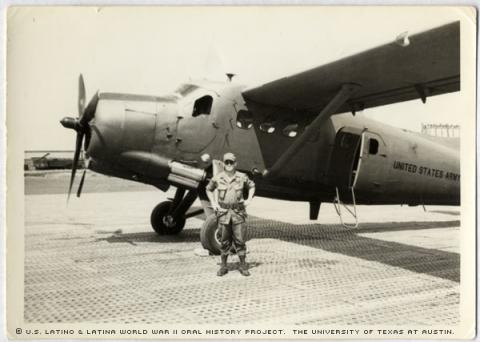 Missing the birth of his two daughters was one of the many sacrifices Richard Brito had to make when he saw that a war threatened the national security of the United States in 1965.

While Vietnam spurred controversy among many Americans throughout the 1960s, Brito said he saw it as a calling to help protect the security of the nation during a time of distress and turmoil.

“I loved the military,” Brito said. “That's what I wanted to do all my life.”

Military service was not new to his family. His father’s first cousin, Teniente Carlos Varela Landini, was a pilot in the 201st Mexican Fighter Squadron who flew a P-47 over the Philippines during World War II. Two older brothers and one younger brother enlisted or were drafted. Brito said he made a decision to do what he believed was right: In 1966, he enlisted in the Army to fight in the Vietnam War.

“In 1964, there were conversations about Vietnam, whether the likelihood of having to serve,” Brito said. “When [President Lyndon] Johnson announced the buildup in 1965, building up Vietnam [by sending] a lot of troops over there, I remember coming home telling my wife I have to go [into] the Army. I [couldn't] be the only brother not to serve.”

Racial discrimination was a pervasive yet unspoken topic in Brownsville when he was growing up, Brito said. He recalled his family, however, didn’t suffer much because his father was a prominent businessman who served on the board of directors of Brownsville’s First National Bank and on the local school board.

“Because of my father's status and position, we grew up without too much problems,” Brito said. “My father would not allow us to associate with Anglos, so most of my friends came from Mexico. But there were instances where Anglo girls wouldn't talk to you because you were Mexican.”

Brito also recalled a time when he and his father were denied service at a restaurant because of their ethnicity.

“There has been a horrible discrimination against Mexicans,” Brito said. But, he added, “during World War II there were only four racial categories listed on enlistment documents. … You were either Caucasian, black, oriental or something else. If you went into military as a Hispanic, you were listed as Caucasian. … Your assignment depended on your ability to communicate in English.”

Brito attended St. Joseph's Academy for his secondary education and then enrolled at the University of Houston on a tennis scholarship.

“For me, [racial discrimination] was not a particularly significant issue,” Brito said. “That never came up in college. I'm sure in some people’s minds it was, but I was never aware of it.”

In 1966, Brito was a junior at the University of Houston. He dropped out and tried to enlist in the Marine Corps but was rejected because he didn’t have a college degree. So he applied and was accepted into Artillery Officer Candidate School.

Brito completed basic training at Fort Ord in California and advanced training at Fort Eustis in Virginia. He graduated from Officer Candidate School in 1967. Soon after finishing, he joined the 8th Special Forces Group in the Panama Canal Zone.

Brito served as one of the group's team leaders for a year and then was sent to Vietnam.

“You got to understand that the Special Forces group was an elite organization,” Brito said, “Pro-Vietnam, pro the war. You don't join Special Forces and get out. You make it a career. They were warriors, and they were proud to have served.”

“It wasn't that different than Panama. I knew the weather and the way people live,” said Brito of Vietnam. “I had seen all that before. The people were different, the smells were a little different, but that didn't bother me so much. It didn't make an impression on me because it wasn't unique.”

Brito said his war experience as a whole was unforgettable; the media’s coverage of the conflict stands out particularly in his mind because of what he perceived as a prevalence of bias and false reporting.

“Since I traveled a lot, I was actually in places where things were happening,” Brito said. “I would read about it in the paper, and news reporters, I would say, were 98 percent in error most of the time.”

Television and other news coverage of the war spurred intense controversy in the U.S. during the mid-1960s. For example, one media report, a CBS-aired piece by correspondent Morley Safer, dramatically impacted the way Americans viewed the conflict. The August 1965 story showed U.S. Marines using Zippo lighters to set fire to homes in the village of Cam Ne.

“They were reporting what people wanted to hear, about how bad things were going, and I was very disappointed,” Brito said of the media coverage in general. “It was an eye-opener for me to see the way they reported the war. I didn't particularly like the Vietnam War. It was the wrong place, the wrong time, against the wrong enemy. But it could have been won easily if it hadn't been for the press.”

For his service in both the Panama Canal Zone and Vietnam, Brito earned the Bronze Star, an Army Commendation Medal, Master Parachutist Badge, Vietnam Service Medal with one Bronze Service Star and a Republic of Vietnam Campaign Medal.

Upon separation Brito returned to the University of Houston and graduated with a degree in economics. He later received a masters degree in business administration. He also joined the Texas Army National Guard, where he served until April 30, 1994, when he retired at the rank of colonel.