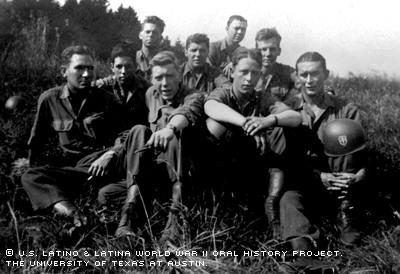 His only thought: to survive.

Shooting out of foxholes on the front line every day, ducking into foxholes to avoid bullets every night and praying every minute it would end soon -- such was the life of Rios during World War II, as infantryman were the first to the front line.

Reginald G. Rios was born in Austin, Texas, to Frank Rios, Jr. and Maria Gallegos Rios in 1925. His father, born in El Paso, moved to Austin in 1900 at the age of 3. Frank Jr. and his six brothers -- Ernest, Alfonso, Rudolph, Joe, Paul and Richard -- carried on their father's business, The Rios Brothers' Tailor Shop, until 1950. They lit the sky over 7th Street for 50 years with one of the first neon signs to shine in Austin.

Between building scooters from two-by-fours and roller skates and shooting marbles with his friends, young Rios spent time at the shop learning the art of tailoring. Master tailors taught him how to sew, mend and finish suits. He and his older brother, Frank Rios III, even toyed with the idea of continuing The Rios Brothers' Tailor Shop for a third generation before they both went to war.

As a boy, he attended Guadalupe Catholic School through the eighth grade, before making the transition to public schools Allen Junior High and Austin High School. At the time, the 1930s, many schools in the state and throughout the Southwest segregated Mexican American students. However, Rios said he didn’t experience segregation growing up in the state's capital.

In 1942, while continuing his tailor apprenticeship under his father, Rios found time to volunteer for the Texas State Guard at Camp Mabry in Austin. The formation of the Guard in 1941 marked the first time any state in the Union could form a militia since the Civil War. In the evenings he trained, playing war games -- dodging flour bombs and throwing rock grenades. His time in the Guard was short-lived, however, because that same year, he was drafted into the Army and sent to the European Theatre of World War II. The bombs and the grenades would be real this time.

As Rios said his farewells and headed to Camp Gruber in Oklahoma for basic training, his older brother was already in England with the Air Force's 56th Fighter Group.

"[Austin] was excited and sorry about the war," Rios recalled.

After basic training, Private First Class Rios transferred to the 79th Infantry Division at Camp Phillips in Kansas. He was assigned to the 79th's Canon Company. The student tailor would soon find himself threading through the torn fields of France, Belgium and Germany over the next two years.

Rios and the 79th arrived in Manchester, England, in March of 1944. While preparing for D-Day, his division and other allies came under nightly German bombings, keeping the Allied forces uneasy. It would be a challenge not only to land on Utah Beach, but simply to cross the English Channel.

"All the time -- it was always going!" Rios exclaimed.

Hazards on the roads made travel risky as the infantry moved from one assignment to the next. Cast-off clothing and weapons littered the ground.

Along the way, an infantryman would do anything to keep himself alert and alive. If the rifle was too unwieldy, he tossed it to the ground. If the coat was too cumbersome, he shed it and left it. Lightweight gear was the smart choice for the soldier always on the move.

"I picked up a machine gun and a flak suit, and man that got heavy. After a few hours, I threw [them both] like the first guy threw it away," Rios remembered. The flak suit Rios attempted to wear resembled an apron -- a bullet-proof armored apron -- usually only worn by airmen.

Weather in November and December of 1944 was particularly harsh. In the brutal rain and snow storms, the 79th, as part of General Alexander Patch's 7th Army, captured Fremonville in Central France on November 19, fought the Battle of Haguenau in Alsace Loraine on December 9 and contributed in defending against the last major German offensive, Operation Nordwind, from December 31 through January 5, 1945. The effort in Operation Nordwind was of grave importance because the 7th Army was the sole defender of Strasbourg, a vital strategic area on the Alsatian plains. A German victory would’ve split the 7th Army and given the Axis powers a solid foothold on the Western front.

Every night the men dug foxholes in the snow-covered ground for a place to sleep and to avoid enemy fire. Body heat provided some warmth but it also melted the snow and ice, leaving cold puddles in the foxhole. This drenched everything and forced the freezing soldiers to discard and replace clothing as soon as drier garments came along. At one point during battle on the Rhine River, Rios recalled finding white sheets in an abandoned house and using them as camouflage in the snow.

While conditions were rough at best, not every moment was spent wet, exhausted and dodging bullets. Occasionally, soldiers from other countries -- France, England and even Spain -- flanked American divisions as they trekked over the ravaged terrain. This gave the men a chance to mingle with men of different cultures and, more importantly, to trade. American currency became chocolate candy and cigarettes.

Rios laughed as he told the story of meeting a group of Spanish fighters outside of Reims, France, in the summer of 1944. The trade: cigarettes for a 5-gallon jug of Spanish wine.

"[The Spanish said to us], 'What's going on? Was the Mexican Army over here or something?' when we asked them in Spanish what they wanted for the wine," Rios said.

Trading and selling was a soldier's way of affording a few simple pleasures. A fond memory for Rios was selling cigarettes he saved from his rations to buy delicious ice cream in Belgium.

The 79th Division joined Patton's Third Army from July through August of 1944, riding with him into battles in Lassey, Laval and Mantes-Gassicourt, France. Patton demanded every soldier look spit and polish regardless of conditions.

"We'd have to polish our boots and you have to wear your helmet and your liner when we were in his area," said Rios with a furrowed brow and jutted chin.

The helmet, Rios explained, served more functions than protecting a man's head: It was a makeshift cooking pot and a wash basin, too. So keeping it atop the head prevented it from being used for other more practical functions.

The Allied forces could at last feel the tide turning in their favor in the early months of 1945. After major battles as part of Patton's 3rd Army and Patch's 7th Army, the 79th Infantry Division soon felt that wave of relief. The division would be relieved of battle duty four short months after January's defense against Operation Nordwind.

"We got to see beautiful [U.S.] combat airplanes. It was so pretty with the Americans winning," said Rios with a sigh.

In 1945, after the war ended, many men were discharged from service through a point system. Points were earned several ways -- battle participation, number of children at home, overall months of service.

Rios, like most of his division, was given security duties in small towns in Czechoslovakia for the remainder of 1945. The men stayed indoors, playing volleyball and basketball and keeping out of sight. Russian troops to the East continued weak, intermittent attacks but were of little concern to Rios and the division.

"[The Russians] were shooting at us, or shooting the sky, or just shooting. We were minding our own business," Rios said.

At last, on Christmas Eve, 1945, Rios was put on a boat home. On New Year's Day, 1946, Rios sailed into New York with Lady Liberty towering overhead. He didn’t immediately return to work as a tailor. Instead, he spent six months resting in Monterrey and Nuevo Laredo, Mexico, with a paternal uncle.

"My uncle said, 'When you're ready to go to work, you can leave,'" Rios said.

Returning to Austin in June of 1944, he started working for Reynolds Department Store and used his GI Bill of Rights to attend classes at the Nixon-Clay Business School in Austin. He became a successful tailor, traveling to the King Ranch to do fitting jobs for a member of the managerial staff. He was also active in the Knights of Columbus, a Catholic men's group, and the Century Club, a social charity organization.

It was at a Century Club-hosted dance in the early fifties that Rios would realize Amelia Riojas was the woman he loved. Rios and Amelia, the insurance manager at Steck Company, a local publishing business, had known each other since 1948 through mutual friends. They consistently found themselves at the same parties and gatherings, but it wasn’t until they danced to the soft boleros -- Spanish slow dance music -- did they see one another in a new light.

Rios asked Amelia for her hand in marriage in 1956. In 1961, the couple was blessed with a baby, Rosanna. Amelia continued to work for Steck Company. However, when Rosanna was 3 years old, Rios had the opportunity to work as a tailor in Memphis, Tenn. Better pay would allow Amelia to stay home and care for young Rosanna.

"I liked that idea," Amelia said.

They stayed in Memphis for 15 years, until one too many cold Tennessee winters drove Rios and the family back to Austin.

"One night I remember going to a football game with Texas A&M and Memphis State and it was so cold. I said, ‘We're going home!’”

"It was the first time he ever said that, and I said, ‘I'm ready!" recalled Amelia with a laugh.

Rios continued to work as a tailor until retiring in 1990. Amelia managed the Guadalupe Neighborhood Development Corporation, a non-profit housing development company for low-income families. She retired in 1997. Their daughter also followed them back to Austin: She married a childhood friend from Memphis and attended Austin Community College.

At 76, Rios still volunteers for Our Lady of Guadalupe Church in Austin, his childhood church and elementary school. He goes to the library every day to read and catch up on current events, and encourages all Mexican Americans to continue pursuing their goals and staying in school.

"A lot of times, it's just finding a little opening," Rios said, referring to making the most out of an opportunity, large or small. "Get all the schooling they can get, any kind!"

Mr. Rios was interviewed in Austin, Texas, on February 20, 2001, by Christopher Nay.