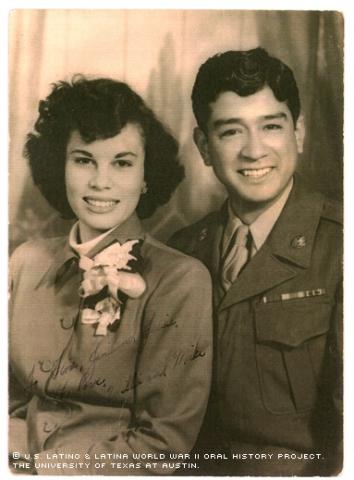 One Valentine's Day, Mike Vasquez knocked on the door to the Cooremans' house with three boxes of chocolates for the daughters still living at home. Fourteen-year-old Wilhelmina, the youngest, answered the door. She was so shocked to discover the biggest box was for her she slammed the door and left Mike outside until her mother reminded her of her manners. Though Wilhelmina was too young for a relationship, the two kept in contact.

"It was during this time that World War [II] started and suddenly he and all the other boys were gone," said Wilhelmina, referring to the fact that Vasquez was inducted into the Army, on Feb. 2, 1942.

Vasquez was assigned to the 756th Tank Battalion. During his time in the military, he kept a notebook to record important dates, where he was stationed and people he met along the way.

His first stop overseas was Casablanca, on Jan. 26, 1943. From there, he’d travel to other parts of Morocco, as well as to Algeria and Tunisia. Vasquez and the 756th Tank Battalion, attached to the 45th Infantry Division, first saw combat on Sept. 17, 1943, landing in full pack in Paestum, Italy.

The battalion fought on, and Vazquez was wounded by shrapnel southwest of Oliveto Citra, Italy, on Sept. 22, 1943. He returned to combat on Jan. 29, 1944, in time for his battalion to cross the Rapido River and become the first Allied unit in Cassino.

He was shipped back to the States on March 27, 1944, to have the shrapnel removed. When he was deemed well enough to serve, Vasquez was again sent to Europe on April 25, 1945 -- this time with the 1st Reconnaissance Troop in the 1st Infantry Division. Since the war was already over, Vasquez served in the occupation of Germany until his discharge.

Vasquez and Wilhelmina wrote letters during his time overseas. Shortly after his return, on Jan. 16, 1946, they married. The couple had two children, Michael and Rene.