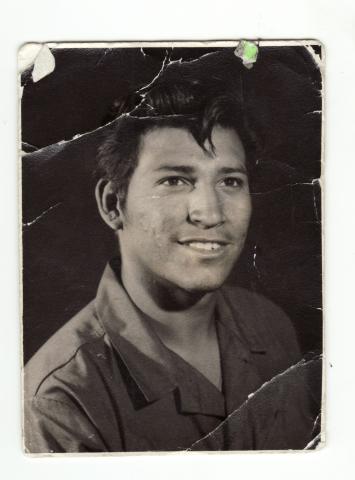 If growing up in a family with 11 brothers and one sister doesn’t sound hectic enough, Raymond
"Ray" Saucedo’s family also didn’t just stay in one location. Saucedo's childhood consisted of summers when the family would load up a truck and wooden camper and head to Michigan, Ohio, or anywhere else that cherry-, strawberry- and tomato-picking migrant work led them.

“Wherever work was, we would go,” said Saucedo, who went on to serve in the U.S. Army in both the Korean and Vietnam wars.

Saucedo was born Oct. 2, 1949, in San Antonio, Texas, to Jose and Seferina Saucedo. Saucedo and his siblings were taken out of school around Easter each year, when the family traveled north to pick fruit at the crack of dawn. The family would return to Texas by mid-October, long after the school year had started.

The shortened school year made it difficult for Saucedo to learn English. In addition, his parents didn't speak English at home. Without any formal education, Saucedo’s father worked odd jobs.“He was always doing something, so we were always doing something,” Saucedo said. “He could get a job, and he had a lot of help.”

Saucedo attended elementary and middle school in the Edgewood School District and went to John F. Kennedy High School in the late 1960s. He worked at Joe P. Martinez Construction Co., which paid $40 a week and was within walking distance of his home.

He couldn't participate in many extracurricular activities because of chores and work, but he found time to sing in the middle school choir and play an occasional street football game with neighbors.

His father had a stroke when Saucedo was in sixth grade and another when he was in 10th grade. After the second stroke, his father was paralyzed on the right side and unable to work. To help the family, Saucedo dropped out of high school and started work as an orderly at a nursing home. He later left for a better-paying job at a manufacturing plant.

“It was real pretty the way it was pictured,” Saucedo said. “The friends in the neighborhood said if you sign up, you can pick whatever (career) you want.”

Saucedo traveled to Fort Bliss in El Paso, Texas, to do basic training for eight weeks. His car repair experience came in handy when he received training in military track-vehicle mechanics. He got a base pay of $101 per month and sent home $90, which the government matched. He also made extra spending cash, to add to the $11 he kept, by doing kitchen patrol or guard duty.

After training, he left on a bus for Fort Huachuca, Arizona, for more basic training. Saucedo says he learned to fire M1s -- guns that were no longer used in Vietnam. According to Saucedo, M1s were much heavier than the M16s that were being used.

Although Saucedo felt physically fit, he didn’t feel prepared by his training. He recalls field training consisting of taking three steps and stabbing a dummy, which he felt wasn’t quite what actual combat was like in Vietnam.

“They’re teaching you how to kill, but that wasn’t the way it was in Vietnam,” he said. “You don’t really see the person coming at you.”

After eight weeks of training at Fort Huachuca, Saucedo was transferred to Fort Sill, Oklahoma, where he trained as a tank mechanic.

Around that time, a reconnaissance plane was shot down in Korea, and the U.S. military rushed a number of men, including Saucedo, to the demilitarized zone in March 1969. There, he spent most of his time in the field.

“I still to this day don’t really know what was going on over there,” he said. “I guess the reason they didn’t tell us anything was because of panic.”

Saucedo served in the 11th and 7th Armored Cavalry units in Vietnam and Korea. In Korea, Saucedo patrolled at night because sergeants were nervous that any stray shot could start a war. Saucedo remembers how he felt scared being close to the demilitarized zone and how the men were kept in the dark about details.

In October 1969, Saucedo got orders to deploy to Vietnam. Two of his brothers were there, and he had requested the move.

But first, he went to Okinawa, where he spent a week of briefing and learned to shoot an M16. There were plenty of mechanics in his unit, so Saucedo was sent to Quan Loi as a "rigger" to resupply helicopters with food, ammunition and fuel.

Although he recalls being afraid in both countries, Saucedo says his experience in Vietnam was vastly different than his time in Korea.

“In Vietnam you shoot first, ask questions later," Saucedo said. "But in Korea, you don’t want to start an international incident.”

One sergeant gave him and a group of men in his truck a piece of advice: “One thing I’m going to tell you guys is don’t make any friends.”

Although there wasn’t much time to socialize, Saucedo befriended other riggers. Saucedo remembers his friends the most from his time in the war, but also the sound of bullets whizzing by.

Upon returning home, Saucedo said, it was a couple of years before he stopped jumping during the night. And on occasion, even 40 years later, the recollection of 50-caliber guns shooting would jar him awake.

In June 1970, Saucedo left Vietnam and landed at Travis Air Force Base in California. He compared the joy of landing on American soil to the fanfare when a favorite team scores a touchdown.

Other memories are more painful. He waited in a California airport for nine hours for his flight home to Texas. During his wait, two men saw Saucedo in uniform and asked how many babies he had killed.

Saucedo said the war changed him in several ways.

Back home, Saucedo helped with organizations such as Meals on Wheels and other community services. He says he believes he did more with his life because of the war than he would have if he had not served.