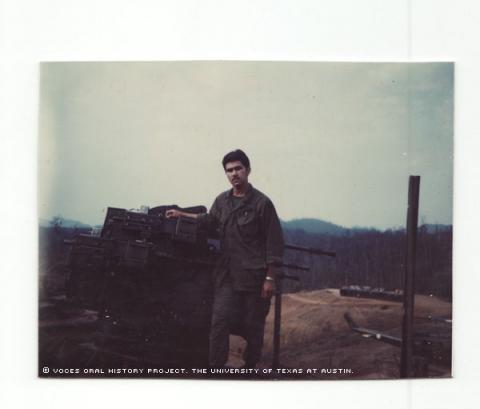 Raymond Garcia, a proud Mexican-American who grew up in a small, segregated Texas town, enlisted in the U.S. Army to help support his family and to help his country. He fought as a heavy machinegun specialist during the Vietnam War.

Garcia was born in El Campo, Texas, in 1951, the youngest of four children, including a brother and two sisters. His mother was a seamstress and his father was a scrap yard man. His father would go around looking for iron and parts to sell to junkyards, anything to help put food on the table. His parents divorced when he was nine, leaving his mother to raise the four children on her own.

El Campo was a city with a diverse population, but it was still segregated when Garcia was growing up.

"Our town was kind of racist," Garcia said. "I spoke Spanish at home, but at school they would jump down your throat if you spoke it."

Students who spoke Spanish in class would be punished by having to stand against the wall or in the hallway and, if caught enough times, they would be sent to the principal's office to be paddled, he said. Speaking Spanish during sports, would get one benched.

Garcia recalled that he never got into trouble over racial or ethnic issues; he just went with the flow. During his years at El Campo High School, he occupied himself with sports. He played football, ran track, boxed, and played baseball. Sometimes the coach wouldn't put him into the game, instead playing the children of the more affluent people of the town.

"The only way you got playing time was if you were really good," Garcia said. "It was rough, knowing you could play and not getting the chance."

During his senior year in high school, he decided to drop out in August 1969 and enlist in the Army.

"My mom couldn't really support me," Garcia said. "I was the only one left in the house, and I wanted to support her, instead of the other way around."

Two weeks after he enlisted, he was off to basic training at Fort Bliss in El Paso, Texas. Most of the other trainees there were Latinos. During his time there he did physical training, cleaned the base and his barracks, and learned how to use M-14 and M-16 rifles. When he finished his basic training, he went onto Advanced Individual Training, where he received specialized training to operate quad .50 caliber heavy machine guns. That would be his job in the Vietnam War.

After AIT he received 30 days leave and went back home. He relaxed, got a girlfriend, and said his goodbyes. By the end of the week in January 1970 he would be in South Vietnam.

"The war was real to me the first day I got there," Garcia said. "I hadn't even been processed or given a weapon before I witnessed my first attack."

On his first day in South Vietnam, he already found himself in the thick of the fight. He jumped into the back of a truck that quad .50 calibers were loaded onto, moved it to the perimeter of the base, and started firing.

"Those four guns can shoot thousands of rounds a minute," Garcia said. "They were meant to be used against air targets. But in Vietnam there weren't any, so we just used them for land personnel."

Garcia lived on a base in a cement tube covered with sand bags and wood. There was a group of soldiers who lived in the barracks next to him, who he would hold mail for. One day they went out on patrol on didn't come back on schedule. They had been ambushed, a few days later new soldiers moved into their barracks and the world went on.

"Those kinds of things always broke my heart," Garcia said. "They were young kids. When I was out there I didn't feel the sadness. Anger. I felt angry that the enemy had done this. I wanted to destroy them all."

Garcia served a year in the Vietnam War. When he returned home, he felt like an outsider, he was seen as a baby killer and vilified.

"No one understood me," he said. "They hadn't been to war, they hadn't seen what I've seen. I came back a changed man."

Back home he had aspirations of finding a job as a mail carrier or a firefighter, and settling down to be a family man. It wasn't to be. Garcia couldn't find a job in his hometown. He said many people had negative images of returning Vietnam veterans. He eventually was able to find employment as an oilfield worker.

He also was married twice and divorced twice.

Garcia felt lost, and also believed that he had lost himself during the war.

Mr. Garcia was interviewed by Andres Salinas in Castroville, Texas, on Nov. 6, 2010.