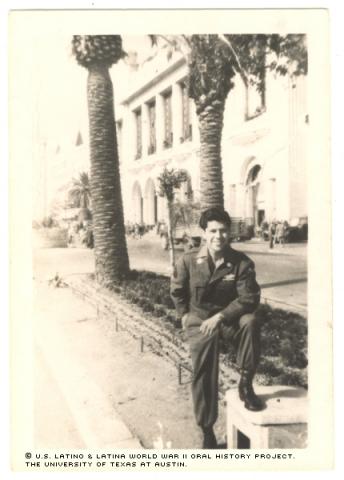 Randel Zepeda Fernández was only a baby when his family moved from Ciudad Juarez, Mexico, to El Paso, Texas, and then to Los Angeles. But later, as a young man, his lack of United States citizenship hampered him.

"I couldn't find a good job because I was an alien," Fernández said. "At the time, joining the Armed Forces was the fastest way to become a citizen."

In March 1943, he enlisted in the Army, subsequently training in Virginia, Massachusetts and Maryland before leaving for Europe with the 315th Infantry Regiment, 79th Infantry Division. He served throughout the continent, spending time in France, Belgium, Holland, Germany and Czechoslovakia as a staff sergeant. He fought in the Battle of the Bulge, took part in the crossing of the Rhine and liberated several concentration camps.

"At one of the camps, we gave the men our rations we had with us, and it was amazing. These men were crying at my feet like babies," Fernández said.

In Germany in December of 1945, he was naturalized. He recalls feeling extreme pride to finally become an American citizen.

During war, he was never injured or wounded significantly himself, but he did lose close friends to the war effort.

"There were times when there were bullets going by six inches from my head. I was just happy to be alive," Fernández said.

He then returned to East Los Angeles. With the help of the GI Bill, he attended a technical school and studied design and tailoring. Fernández’s godfather began teaching him how to sew during a summer Fernández spent with him, and Fernández eventually started his own business, Randy's Tailor and Cleaners in East Los Angeles. He owned it for 15 years.

"The East L.A. riots hurt all the area businesses and because of that, I decided to sell," Fernández recalled.

In the years that followed, he worked several different places. He says he tailored for famous stars in the entertainment and film industry at Charles Malley Tailors for two decades. He also worked as head tailor with Zeidler and Zeidler Men's Clothing, where his son later became a regional director.

Even after he retired, Fernández says he still had faithful customers come to his home for alterations.

During the Depression years, the Fernández family survived by working on farms, harvesting apricots, peaches, plums, pears, apples and walnuts. He credits his father, Concepción Novella Fernández, a candy maker by trade, and his mother with providing a good foundation for his family.

"I was raised in a hard-working Catholic family, with a tough mother that gave us love and respect," Fernández said.

He says he feels community involvement is part of his obligation as a citizen, and that he has been a member of the V.F.W., American Legion, Elks and Knights of Columbus.

"It's important to volunteer your time to organizations that count," Fernández said. "I was motivated to join because it's charity done the right way."

Fernández married Lillian Barella and the couple had two children: Steve and Loretta. He says his grandchildren are proud of his service and background.

"When they found out that I was born in Mexico and earned my citizenship through the Armed Forces and fought in WWII, they were very excited and surprised," Fernández said.

Mr. Fernández was interviewed in Fontana, California, on June 30, 2004, by Steven Rosales.