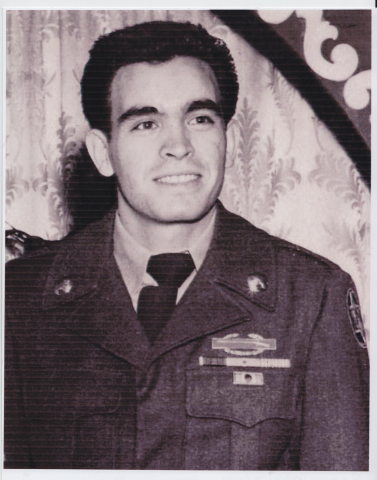 When Ramon Lugo reminisces about his life, he speaks of hard work on farm fields as a child and on battlefields as a young man.

Once the Lugo children got old enough, they worked in the fields, picking cotton, carrots and cantaloupe during the summers in their hometown, Glendale, Arizona.

“I guess you’d call it child labor now. It was rough,” he said.

The family lived in the barrio on the other side of the railroad tracks from Anglos. "The tracks were like a divider: 'You guys belong there,' " he said.

There was not a lot for children to do. Lugo said they played baseball in the street or took long walks in the countryside. If he could get 11 cents from his parents, he could see cartoons and a movie at the town's lone movie theater. He recalled swimming in a pool only once, during a grade-school field trip. The rest of the time, children swam in the irrigation canals to cool off in the summer.

Lugo left school at about 16 to work in the fields full time to help support the family. His parents, Jose and Guadalupe Lugo, who had emigrated from Mexico, had 11 children -- six boys and five girls. The family followed the crops to find work, sometimes piling into a pickup truck to head north.

In December of 1950, during the Korean War, the 21-year-old Lugo was drafted by the Army and sent to Fort Ord in California for 14 weeks of basic training. He was assigned to the 46th Regiment of the 2nd Infantry Division.

Lugo said his family wasn’t too troubled with the idea of him in the Army. “There were so many of us, they didn’t care if one left, I guess,” Lugo said.

Some soldiers found the training too rigorous -- not Lugo. "I liked it because I was young and full of energy," he said.

He then spent 14 weeks in Honolulu, where he was assigned to help train other recruits, "showing them what I had learned and how to do it so they would survive."

From there, he was sent to Korea, where the U.S. was part of a United Nations force defending the south against attacks from the communist north. Lugo said he didn't know anything about communism or the reason for the war before the Army. "The communists wanted more land, I guess. We had to push them back."

In the plane above Korea, "from the air, we could see all the holes from the bombs in the roadways," he said. Before long, his platoon was at the front lines in the mountains near the 38th parallel. "All I saw was hills," he said. "You go up one hill, and there are more and more hills."

Lugo fought in two notable battles in the late summer and fall of 1951: The Battle of Bloody Ridge and the Battle of Heartbreak Ridge. Both were named because of the high casualties on both sides. He recalls seeing one North Korean soldier hit with what he assumes was a large mortar. "He was on top of a foxhole. It blew him into 100 pieces."

Lugo himself nearly was killed at Heartbreak Hill, when a mortar exploded, throwing him up the hillside and wounding his foot. "When I got wounded, I asked some friends to carry me down, so they'd be out of it for at least a day," Lugo said. At the hospital tent, medics gave him a shot of morphine and removed some of the metal from his foot.

He spent six months recuperating in a hospital in Tokyo. "I was treated right," Lugo said. The medical staff cleaned his wounds every day, and a barber came every now and then to cut his hair.

After six months, Lugo was shipped to San Francisco and then transferred to Camp Roberts, also in California. But every time he was called to report for work assignments, he was sent back to the barracks because he was not fit for work. “Nobody wanted me then. I couldn’t do nothing,” said Lugo, referring to his wounded foot. He finally got an assignment driving a school bus for children of families who lived on base.

Lugo was discharged Oct. 2, 1952, at Fort MacArthur in San Pedro, California. He worked as an aircraft mechanic at Douglas Aircraft plants in San Pedro, El Segundo and Wilmington; got married; and had three children. "I had a lot of money coming in then," he said. "It was a good life."

He received disability for his injury, a Purple Heart and a combat infantry badge. “I heard that we had a presidential citation coming, but I never received it” or the Korean War service medal with two Bronze Stars, he said. His children have urged him to pursue the matter, but he said, “Who wants a medal? They wouldn’t do me any good.”

His foot still hurts; he can't run or do hard work.

The war is still with him. "It affects your brain, all the stuff you see out there.”