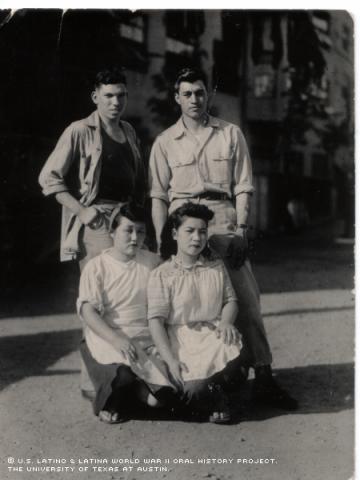 Ramon C. Flores was 64 years old when the Persian Gulf War began. Struck with pangs of patriotism, the World War II veteran promptly showed up at the recruitment office and tried to enlist, but was turned away because of his age.

"I can still handle a gun," Flores said. "I was tired of being a civilian."

For Flores, service to his country runs in his bloodline. Generation after generation, his family has been in a range of combat, from his father's World War I service and his son's time in Vietnam to his grandson's "War on Terrorism" service in Afghanistan.

Now relegated to the sidelines, Flores can only recollect his time in the Philippine archipelago through war movies, memories and his friends at the El Paso Veterans Administration. It’s at the VA where he tells the story of his life and of his service to the Red, White and Blue.

Flores' mother and father, Leonila and Jesus Flores, crossed the U.S.-Mexico border in the early 20th century, settling in El Paso, Texas. Gradually learning English, they worked hard to secure the American Dream for their 13 children.

Jesus worked for the Southern Pacific and Santa Fe railroad lines, while Leonila stayed home and cared for the brood of 11 boys and two girls. The Great Depression forced Flores to quit school in elementary school and work to help support the family.

"I never went back to school again," he said. "I finally started working as a baker's helper."

Flores earned about $2.50 a week cleaning Khan's bakery in El Paso. He began at the bottom and learned how to bake by observing others.

From cookies to cinnamon rolls, French bread, Danish pastries, cheesecakes and wedding and birthday cakes, Flores says he loves to bake them all. He recalls how his sergeant did not want to draft him into WWII because of his culinary skills, but his service was needed in the South Pacific.

Upon getting the news that he’d be leaving for the Philippines, 18-year-old Flores got married at Fort Bliss in 1944. He wed the former Olga Delgado.

"I thought I better get married before they take her away from me," he said. "I told the barber, because of the G.I. haircut ... ‘be easy on my haircut because I'm getting married.’"

He left his pregnant wife behind in El Paso and traveled 31 days on the USS Gen. John Pope to New Guinea. Flores, who was a member of the C Company in the 136th Infantry Regiment, 33rd Division, got his first taste of war while still on the ship.

The soldiers were taken into the hull under lockdown. Flores says he could hear fighting overhead between Japanese and American Navy fighter planes, and that the Japanese had been firing at the ship.

Three days after he’d arrived at New Guinea, Flores was transported to Manila, a landscape much different from El Paso, inhabited by exotic (at least to Americans) birds, monkeys and snakes. At night, the soldiers had to pull a mosquito net over their heads and endure humidity and rain.

"Water would be pouring all over the food and there was nothing you could do about it," he said. "Our daily ration of little yellow Atabrine(tm) tablets for malaria would have to be swallowed as soon as they were passed out because they would melt in the rainwater in our hand."

His fellow soldiers were different, too; many of them had never heard Spanish.

"When they took me, I didn't speak much English," Flores said.

Some of the soldiers didn’t like to hear Spanish and were discriminatory against Flores and the other Latino soldiers.

As a rifleman, Flores patrolled the beaches each day. One incident in particular stands out in his mind from his guard duty days.

"I saw all my friends looking at the roster. They were going to be shipped out to another island. I went and I asked them, 'Hey, where's my name?' 'No, you have to stay on guard duty,'" Flores recalled being told. "So, they ship 'em out and they were ambushed."

All of his friends were killed in the mission. Flores remembers how eager he’d been to join them, and how shocked he was to learn of their tragic fate.

Another narrow escape for Flores came as his regiment stormed the Japanese coast just after the Americans dropped atomic bombs on Hiroshima and Nagasaki.

Despite the many casualties in WWII, Flores' family -- which sent five brothers to fight overseas -- remained intact and Flores was never injured. When he returned to El Paso, something startling happened: His wife and his son, who was now almost 2 years old, greeted Flores.

"I grab him in my arms, but he started to cry, so I put him down. He didn't know me," Flores recalled.

Once discharged and with about $500 in his pocket, Flores took time off to spend with his family, which grew to eventually include six children: Ramon Jr., Elena, Ruth, Elvia, Sandra and David. He resumed his job at the bakery, but the pay was inadequate. He eventually landed another job, also as a baker, at the local hospital.

"When President [Lyndon B.] Johnson came to El Paso, I made the cake for him," said Flores with pride. "It was a pyramid and I was on television."

Now retired but still an avid baker, Flores said he’d like to get a business loan from the government to start a small bakery in New Mexico.

Despite the years, Flores said he’ll never forget the horrific art of war.

"Sometimes, I start to remember when I'm by myself, but some things, I don't like to remember," he said.

But he was forced to revisit his experiences on Sept. 11, 2001, when airplanes piloted by terrorists hit the World Trade Center towers in New York City. Imbued with the same unflagging patriotism that guided him to battle more than 60 years ago, the septuagenarian would gladly take up arms today if he were called.

Mr. Flores was interviewed in El Paso, Texas, on February 2, 2002, by Andrea Williams.