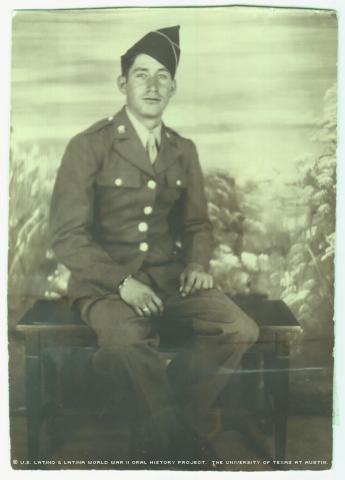 Ramiro Ramos has spent much of his life just trying to get by.

Raised near the Texas-Mexico border, in the town of Salineno, Ramos was one of seven children born to Rita and Esteban Ramos in the early 1920s. He was born on Sept. 12, 1924.

“There were more than enough of us to play with,” said Ramos.

When they weren’t in school, Ramos and his siblings spent much of their time helping their father, a laborer and sharecropper, in the fields. Often, they would have to leave their classes to earn money for the family. And when they could return to their studies, Ramos remembers feeling academically behind the rest of the class.

Life in Salineno and nearby Roma was rather simple, Ramos recalled.

“There was no running water, no phones, no refrigeration,” Ramos said. “[You had] to go to the river to get water for all of the houses.”

As Ramos would ultimately learn, working hard for his family would prepare him for the challenges he’d face later in life.

“You don’t have a hard time getting adjusted [to hardships] … you were used to it,” he said.

When it came time to enter high school, Ramos and his peers were bussed approximately 10 miles west to Roma, Texas. This was before the major roadways were paved.

“It was terrible,” Ramos recalled.

Still often torn away from classes to work with his father and siblings, Ramos says he realized how hard he’d have to work -- not just at that point, but for the rest of his life.

“The human race … we’re tough. You make it because … there is nothing else to do,” he said.

When the Japanese bombed Pearl Harbor, Ramos was only 16 years old.

“I didn’t understand,” he said, adding that he found it difficult to keep up with the war because most of the news he heard came from Spanish radio stations. There were no newspapers where he lived, and the radio usually only gave brief reports with little detail, Ramos said.

At this point, his only encounter with enlisted service was with his brother’s experience in the Civilian Conservation Corps, a government program set up to put unemployed young men to work. Then, as Ramos worked with his family in Brownsville, his mother in Salineno received his draft letter. She forwarded the message to the orchards where Ramos was picking grapefruit and oranges, and he returned home to prepare for training in San Antonio.

Ramos, 18, reported to Fort Sam Houston in San Antonio on July 5, 1943. This was his and his friends’ first time in a major city, and they often left the base to explore it.

“We kept together,” Ramos said. “It was something very strange to us.”

After basic training at Fort Sam Houston, Ramos was sent to Abilene for medical training at Camp Barkley. After six months in Abilene, he headed to New York to prepare for his trip to Europe. He sailed across the Atlantic aboard the Queen Elizabeth and arrived in Glasgow, Scotland. From there, he was sent for more training in South Wales and Birmingham, England.

Only months after seeing a major city for the first time, Ramos and his fellow medics were in even more disbelief as they traveled through Europe.

“You had to pick something up to see if it was true,” he said.

After more medical training in South Wales, Ramos prepared for D-Day in June 1944. He was part of the 2nd Medical Battalion, 23rd Infantry Regiment, 2nd Infantry Division. He remembers his major told him to write a letter to his family.

“I wrote mine to my Mama because my dad couldn’t read. I told her we were doing alright and not to worry,” said Ramos, adding that he was careful not to include anything in the letter’s content that could be used by the Germans if they intercepted it.

Early on June 6, Ramos and his fellow medics struggled through Normandy sand and mud, past the dead or nearly-dead U.S. soldiers. The medics were instructed to help the wounded soldiers, no matter how bad their wounds appeared to be.

“You have to help them until their last breath,” Ramos said.

During his time in Europe, he developed a strong friendship with fellow medic Clifton Ledbetter, who was from Oklahoma. Even when Germans captured Ledbetter, Ramos kept up correspondence with Ledbetter’s family to let them know they were still searching for him.

“We couldn’t tell them much [because] … we didn’t know,” Ramos said.

After six months of searching, Ramos and his crew recovered Ledbetter from the Germans.

After Normandy, Ramos saw action in the Ardennes and the Rhineland.

Ramos was eventually rotated back to the United States. He was discharged at Fort Bliss in El Paso, Texas, on Oct. 8, 1945, as a private first class. Among his decorations were the Bronze Star, the European-African-Middle Eastern Campaign Medal, and the Good Conduct Medal.

Ramos returned to Salineno and married his sweetheart, Edna Salazar, who is three years younger than him. The two met in 1941 at a local community dance, an event called a “Mexican Tejano.” Ramos and Edna wrote each other throughout his deployment. They had two sons and a daughter, and they remain married today.

Though Ramos was thrilled to return home to the woman he loved, he soon learned the emotional toils of a life after war.

“You kind of learn to live with it,” he said, referring specifically to Post-Traumatic Stress Disorder.

Ramos remembers one specific dream vividly. In it, two German soldiers grab his ankles and wrists and throw him into a bottomless pit. Though he says the two soldiers remain faceless each time, he can still easily make out their belts, boots and uniforms. Ramos shrugs off the dreams and tries to take them “not too serious.”

After seeking help from doctors and the Texas Veterans Commission, Ramos seems somewhat indifferent regarding the accommodations offered to former war veterans.

“You can take the pills and quit them … but it gets worse and then you start again,” he said of prescription medications. He calls the anxiety pills prescribed to him in the past “habit forming.”

Ramos and his wife retired from their jobs and live in Adkins, Texas, just outside of San Antonio, where they “live a very normal life,” Ramos said.

As they grow older, they depend on their daughter, who lives nearby, for assistance. They maintain the couple’s house and a small amount of land just outside the city.

“We do what everyone else does … we manage,” Ramos said.

Although many of his fellow medics and infantrymen have passed away in recent years, he continues to look forward to the days that lie ahead of him with the same outlook he has had for so many years.