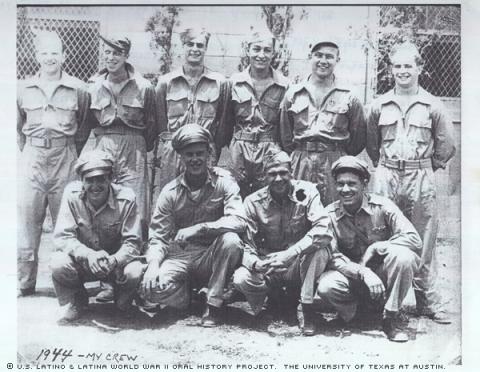 On August 6, 1944, United States Air Force gunner Ramiro Cortez was about to board a plane bound for Berlin, Germany, which would have been his sixth mission, had he gone through with it.

Cortez wasn’t originally assigned to this mission, but he agreed to go in place of his friend, another gunner named Kenneth Law. At the last minute, however, Kenneth changed his mind and took on the assignment instead of Cortez.

Through the anti-aircraft fire, the crew of the Hubba-Hubba B17 plane had to bail out over Berlin. Kenneth passed-out from lack of oxygen and fell through the daylight to his death, while the rest of the crew became prisoners of war, not to see freedom until the end of the conflict.

“I felt like an orphan,” said Cortez, a member of the 1st Air Division, 8th Air Force, 351st Bomb Group. “I was the spare gunner on the ground, and I waited for my crew to come back, and they never came back. All these things come into your mind, and you start thinking, ‘I’m not going back to the United States. I might as well resign myself that I’m going to die here.”

Cortez had escaped death, but he says he felt sure that if he stayed in the war, he’d soon die. While on late-night duty guarding the planes on his base in Germany, Cortez made a promise to God.

“I knelt on the cold pavement and I prayed to God,” he recalled. “I said, ‘God, I’ll make a pact with you. If I make it home, I will live a better life.’”

Cortez likely wasn’t the only member of the 8th Air Force doing some desperate praying in those heady days. According to Decision Over Schweinfurt, by historian Thomas M. Coffey, the American Air Force and England’s Royal Air Force were well into an ongoing conflict over strategy for bombing German cities by the time the Hubba Hubba came up to bat in Berlin. The impasse revolved around the question of whether it was better to bomb during the day or night: Key players in the AAF believed flying during the day was more effective, while the RAF believed flying at night was better.

The story goes like this: “[O]n February 22, 1942, Brig. Gen. Ira C. Eaker arrived in England with a pathetically small staff of six to launch the newly created 8th Air Force Bomber Command. Eighteen months later, on August 17, 1943, the question was still undecided when Eaker sent his B-17s to attack the vital German ball-bearing plants at Schweinfurt in what was then the largest operation ever attempted by the American Army Air Forces.

Less than a year after the mission against Schweinfurt, the Hubba Hubba went down and Cortez was sent back to the States to be retrained on B29 planes in Avon Park, Fla. While he was there, President Harry S. Truman announced the bombing of Hiroshima and the end of the war.

“Life goes up and down,” Cortez said. “If it wasn’t for the atomic bomb, I know I would have gone back and died in the war.”

Cortez was honorably discharged in November of 1945 as a sergeant and returned home to San Antonio, Texas, at which point he resumed his job as a clerk with the Post Office. He and his wife, Bertha Magdalena Cortez, went on to have 14 children, all of whom went to college and became professionals. Two of them even went to Princeton.

“I always told all my children, ‘None of you would be here if the war hadn’t ended when it did,’” Cortez said.

When he enlisted in the Air Force in November of 1942, Cortez was 20, and admits he was naïve. He even asked his enlistment officer if he could be stationed in San Antonio for his training so he wouldn’t have to leave his family and sweetheart.

“He said, ‘Sure you can stay in San Antonio!’” Cortez said. “So I signed up real quick and was sent to Brooks Field Air Force Base [Brooks Field eventually became Brooks Air Force Base.] and I was happy. But I was only there for one week. One week. Just enough time to get my uniform and all my shots.”

A week after enlisting, the military sent Cortez to Buckley Field in Colorado for machine-gun training. Stepping out of the plane with other young men from Texas into the Colorado winter, Cortez says he felt like his “ears were freezing off.”

After passing his basic courses, he decided to train to become a tail gunner.

“One of the instructors pointed me out and said, ‘You would make a good gunner, and good gunners get 50 percent more pay,” Cortez said. “Those visions of money started getting into my mind, and before I knew it, I said I wanted to be a gunner.”

For a young man who grew up in the Depression and worked from an early age to help his family survive, 50 percent more pay was a major incentive. Cortez’s father was a barber, and his salary wasn’t enough to support 10 children. As the oldest, Cortez started shining shoes and selling newspapers at the age of 10 to make extra money, which he gave to his mother. When he

first began working at the Post Office, he made 65 cents per hour, and says he felt that he was rich.

“I started to see a whole new kind of life for myself,” he said.

Of course, in life there is always a catch: Cortez later found out that 80 percent of all gunners die in action, hardly worth the increase in pay.

He then decided to train to become a pilot, and even took a 90-day course on piloting aircraft, which he recalls passing easily. The last step would be to go to San Antonio and pass a test to see if he qualified. Cortez wrote his sweetheart, his future wife, that he was coming home for a while and that he would become a pilot.

His dreams were unexpectedly deflated, however.

“This is the way the fate of all of us turns,” Cortez said. “We think we are floating on a cloud, and then the bottom falls out.”

After taking and passing all of his tests, Cortez was “washed out.” In other words, the military didn’t make him a pilot. He says the only reason stated in his record is “lack of coordination.”

“I know I passed everything,” he said, “but I didn’t get the credit.”

Now married 53 years and with many children and grandchildren, Cortez is satisfied with his life. He survived, and says he lived up to the agreement he made on the cold pavement after narrowly escaping death. He has had a good life.

Mr. Cortez was interviewed in San Antonio, Texas, on May 3, 2008, by Jessica El-Khoury.