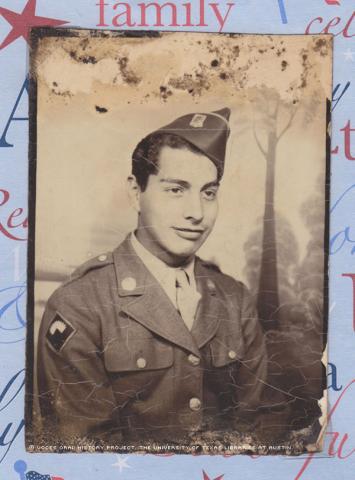 After dropping out of high school, Ramiro Castro was working as an electrician when he was drafted in 1943 into the U.S. Army during World War II. He would go on to use his expertise as part of his service--working with engineers and installing electrical services wherever they were needed.

Castro, a native of San Antonio, was living in Los Angeles when the U.S. joined the war. His family had moved from Texas to California in 1932 after his father, Felix Castro Sr., found work as an electrician in a bakery. Castro had six sisters and three brothers, one of whom -- Felix Castro, Jr. -- served in the Army at the same time he did.

After basic training at Fort Ord, California, Castro was assigned to the 7th Infantry Division, 104th Engineer Battalion, and shipped out to the Aleutian Islands, where he took part in the Battle of Kiska.

His main duty there was to use a flamethrower and grenades to force Japanese snipers out of hiding places, such as caves. Castro recalled that operating the flamethrower was difficult and dangerous; the weapon weighed up to 60 pounds, and if the gas that lit the fire was not properly regulated, it carried the risk of blowing up.

In early fall 1944, Castro was transferred to the Philippines, serving most of his time at Leyte. He wrote that he was there during Gen. Douglas MacArthur's famous return to the islands, and had the opportunity to meet him. Castro recalled that McArthur did not talk much, but he was a good listener and was extremely well liked.

"Me and my friends were star-struck. I remember some bombs going off and his officers dropping. He stood, and we stood too. He got mad at his men and told them they would lose their rank."

Castro suffered an injury to one of his feet during his service. In 1944, while clearing a path, a fellow American soldier using a machete got too close to him and accidentally struck him on the back of his foot. He was taken to Hawaii for treatment at the Tripler Hospital.

During his time overseas, Castro recalled having received letters from his girlfriend, Angie Mendoza. Receiving packages was an exciting time for the soldiers. Castro said all the soldiers shared their letters and the items they received.

"Hearing from the families is something important for our GIs," Castro said.

One of his pastimes during the war was boxing. He had some boxing experience before the war ,and he considered himself to be a pretty good fighter. He said he became a popular boxer among his friends and fellow soldiers. Castro remembered many of his friends from East Los Angeles, who were also serving in the military, would cheer him on with pride because he was "one of them."

Other memories from the era are not as happy. While he was away at war, his father died and Castro was unable to make it for the funeral, because a captain did not allow him to travel home.

"I was furious. My dad had a bad heart, and he knew he was going to die," he wrote to the VOCES Oral History Project after the interview.

Castro was discharged from the Army on Oct. 12, 1945, with the rank of private first class. For his service, he was awarded a Bronze Service arrowhead on a Pacific Theater ribbon, as well as a Good Conduct Medal.

After Castro's homecoming, he married Angie, his longtime girlfriend., Angie, who he had known since grammar school. The couple had five children, three boys and two girls. Following in the family tradition, two of his sons also joined the military; one of them served in the Vietnam War and the other got to the Southeast Asian nation just after the end of the war.

When asked about the United States being involved in conflicts in Iraq and Afghanistan, Castro said he did not like to see people go off to war, but that he had much respect for the troops.

"Somebody has to go," he said.

After World War II, Castro also had a career as an evangelist and traveled throughout the United States working for the Latin American Council of Churches (CLADIC in Spanish.)

He strongly identified himself with the Latino community and believed that much progress had been made, even though, he remarked, much more was still possible.