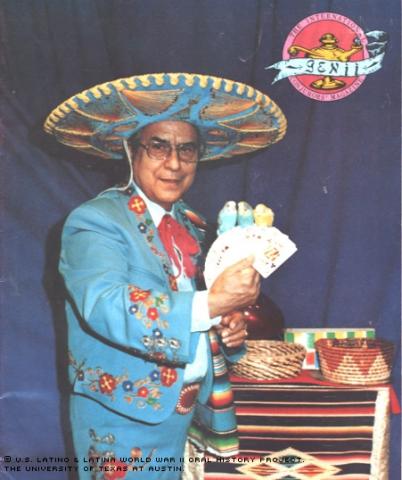 It was May 8, 1945. The war in Europe was over, but not for Ramón G. Galindo. After the death of Adolph Hitler, it was Galindo's 571st Anti-Aircraft Automatic Weapons Battalion that was stationed at Hitler's headquarters. As Galindo stepped into the building, the first thing he saw was a large swastika, the powerful symbol of the Nazis.

Covering the walls were oversized pictures of Hitler and his top officers.

Part of Galindo's mission was to protect the images of the very man the Allies had been fighting against.

"They had a couple of big pictures of Hitler there, big pictures, the size of a door. They said to us, 'Look, we know that everybody is mad at this SOB but no one is to take their bandit [knife] and cut it,'" said Galindo with a cold face. "I didn't realize I was sitting in a building that was going to a big part of history."

Galindo was born on May 29, 1921, in San Juan, Nuevo Leon, Mexico. His parents brought him to the United States in 1922; he became an American citizen at the age of 22, while in the military.

Upon his return, Galindo married, started an occupation as a tailor and had two children. He later became a semi-professional magician, a hobby he long continued to enjoy.

"I'm up in age and I don't feel it. The Lord has blessed me. I've been through a lot of difficult times. I consider myself very lucky," he said with a smile.

At the time of his interview, the walls of Galindo’s home were covered with many plaques from his work as a magician, as well as pictures of his two children, seven grandchildren and five great-grandchildren.

His own childhood was spent partly in Mexico, then in Austin, Texas. His parents, Tomás and Josefa Galindo, moved to Austin in 1910. A year later, after the birth of daughter Felicita, they returned to Mexico and opened a tortilla shop and bakery, as well as had Ramón and two other children: Joe and Juanita.

The tortilla shop and bakery caught fire in 1922 and was destroyed, so the Galindos returned to Austin and opened another tortilla shop called El Fenix, which they later named Galindo Tortillas. In Austin, they had two more children: Maria and Tom.

Galindo grew up in Central Austin, in a mostly Mexican neighborhood. The neighborhoods surrounding Galindo were segregated by race and color; however, he recalls he and the children from adjacent blocks – African Americans and Anglos – ignoring their differences and enjoyed their days playing together.

Galindo's childhood was shortened by the Great Depression. Many people were having a hard time earning a steady wage, so it was difficult to buy simple things. A hamburger was a nickel and a deluxe hamburger was 10 cents, he recalls.

His father worked for a physician six-and-a-half days a week as a gardener, making 10 cents an hour. Along with his wages, the doctor, Goodall Wooten, donated a house to the family in exchange for Galindo’s dad’s dedication.

"Even though America was going through a hard time, we were doing pretty well," Galindo said.

He preferred working to going to school, which he stopped attending in the seventh grade.

"I 'quiturated.' I didn't graduate so I made up the word 'quiturated,'" said Galindo with a chuckle.

The United States entered World War II in 1941. Many joined the war effort, including Galindo. Since the Texas National Guard had been called to war, the Texas State Guard was formed. Galindo decided to sign up for the State Guard since it was in need of volunteers. Soldiers from the First World War trained him at Austin’s Camp Mabry.

A year after entering the State Guard, Galindo says he felt it was time to join the war effort, so he tried to enlist in the Army Air Corps. He and his younger brother, Tom, drove an old Model T Ford to enlist at Randolph Field in San Antonio, Texas. It was a long drive because the car's maximum speed was 25 miles per hour. Once they got to San Antonio, Tom enlisted in the Army Air Corps; however, Galindo says he was turned away because he wasn’t an American Citizen.

While he couldn’t join the Air Corps, Galindo was able to join the 571st Anti-Aircraft Automatic Weapons Battalion six months later. He received his training at Camp Wallace in Galveston, Texas, and would later be assigned to shooting down planes.

He had already been taking flying lessons, as he had his heart set on plying the skies.

"I remember when they first told us what the battalion was about. They said we had to shoot planes – not fly them. I thought I was really going to fly a plane," said Galindo with a laugh.

Soon after, Galindo was sworn in as an American citizen in 1943 in Boston, Mass., while stationed nearby.

Galindo served in Europe from 1944 to 1945. The two biggest battles he took part in were the Battle of the Bulge, from December of 1944 to January of 1945, and the Rhine River Battle, in March of 1945. He described Rhine River as the "worst" battle of the two.

Galindo lost many friends and soldiers during that night of fighting. His life was spared because he knew the sound of cannons when they were coming near. The German Fliegerabwehrkanone cannons, also known as 88-mm "Flak" cannons, whistled when they were near, so he always heard the warning and dropped to the ground.

"It started at 12 midnight. It sounded like the end of the world!" said Galindo, squinting his eyes while remembering the night. "Shots were coming from everywhere. It was every man for himself. That was the only way you could survive. It is definitely something I would not like to experience again."

Galindo was honorably discharged Feb. 1, 1946. Soon after, in November of 1946, he married Pauline Santos. They met in Elgin, Texas, through mutual friends. When he first met her before the war, she was only 12 years old. After the conflict, he says he didn't recognize her – she was a young woman. They’ve been married for more than 50 years.

Although he was trained as a welder, he found no demand for those skills back home after the war ended. As a result, he started working as a tailor, making 35 cents an hour.

In 1948, with the support of his wife and the help of a bank loan, Galindo opened Galindo the Tailor in downtown Austin. For 20 years, he made uniforms for the University of Texas at Austin cheerleaders. He sewed for many well-known people, including Lyndon B. Johnson when LBJ served in Congress.

Galindo successfully ran his business until he retired in 1991.

After retirement, he spent a lot of time working on his magic tricks, something his father had enjoyed when he was alive.

"He would giggle and laugh and just looked like he had so much enjoyment out of it," Galindo said.

Galindo has worked as a semi-professional magician and has received many trophies for his magic. He has traveled to conferences throughout the world, and has received much recognition, including being placed on the 1991 cover of magicians’ periodical, The International Conjurors' Magazine.

"So I've had my life, a good life. I prayed to God that if he would give me life and good health, I would do the rest. And now I feel strong; I don't feel sick; I don't drink any kind of tablets," Galindo said. "Right now, I'm 79 and a half years old and I feel wonderful.”

Mr. Galindo was interviewed in Austin, Texas, on September 27, 2000, by Martamaria McGonagle.