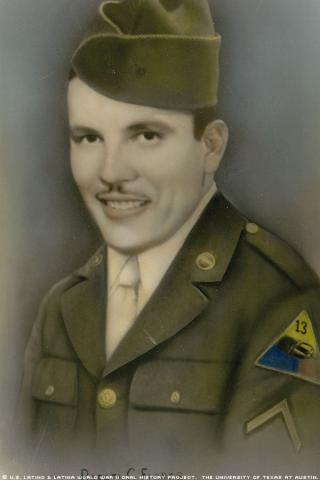 Rafael Flores put his life on hold when he was drafted into the U.S. Army during World War II at the age of 22. His experiences in the Army not only matured him, but also changed his outlook on life as a Mexican American, he said.

Flores said that he was working in the agricultural fields of Californias Central Valley when he heard about Pearl Harbor -- everyone was talking about it. He recalled Pearl Harbor, and how devastated it looked, it sounded. Flores said he and his friends thought about volunteering to serve in the military but ended up being drafted before he could volunteer.

Flores had been working at a new job in the shipyards when he was drafted. He received his draft notice in the mail in the fall of 1942. His mother cried about it and said O mijo [son], God bless you!

You have to do it; be a good boy, he recalled her telling him very sadly. Neither his family nor friends were very political. They did not talk much about the war or current events, only about how anxious they were about going into the Army.

In the Army, he started work as a tank assistant driver. This is when I realized how bad my English-speaking was, he said. While he struggled with the language, the other guys made fun of him. One night Flores was writing a love letter to a girl, and he kept asking his friend, how do you spell this, how do you spell that. They were all surprised that he could read and write so well in English. Soon after, the men from the Midwest who had made fun of him were asking him to read and write letters for them.

He also faced discrimination from his sergeant and other servicemen. His closest friend during camp was a Native American, because they both felt isolated from the other men. Flores remembered his sergeant picking on him. You can just feel it, he said. He was even recommended to be a corporal for his excellent work, but the sergeant turned down the recommendation, he said.

After basic training at Camp Beale, about 40 miles north of Sacramento, Calif., he couldnt be sent overseas because of an injury, so he was assigned to get additional training to become a dental assistant. Flores was sent to dental school for six months in Denver, Colo., before he was sent to France with the 237th General Hospital, 7th Army, in December 1944. His job was a dental specialist, and he treated men coming from battle.

The men were disoriented and didnt talk much. Some were mentally disturbed, Flores said. He returned stateside the following August.

Overall Flores said his time in the military was pleasant, he performed dental duties and spent a lot of time socializing. Flores was able to learn a lot of French by talking to the locals and studying a book they gave him. While working in the Army, he had a 10 p.m. curfew but he still went out to dance. One night, a patrolman stopped him around 2 a.m. so he spoke in French to pretend he was a local Frenchman. During the day he socialized, smoked cigars and acted like the French men. He even began to date women around the area, making local men jealous.

Flores remembers visiting a Jewish section of the town. He heard a group of ladies speaking Spanish and was surprised. He started to speak to them and went dancing with them. He said that is when he realized that, even across the world, Its no different from here.

When he returned home, he felt very proud to have represented his country as a Latino and began to fight against discrimination. Flores believed that having been in the service created more opportunity for him as a Latino. He felt that he could do better, believed in himself more, and felt stronger.

One thing I learned in the Army, I was not as dumb as I thought I was, Flores said. He received an honorable discharge and left at the rank of Pfc., with a good conduct medal, a European African MiddleEastern Theater ribbon with one bronze star; an American Theatre Ribbon and a World War II Victory Medal.

Flores said he challenged a local policeman who resented Mexican Americans, and the policeman arrested him for being drunk. He told his story in court, arguing that what happened to him was not right--even though he was drinking that night, he was behaving and was not out of control. After he was released, the policeman cursed and yelled at him for what he did. He continued to tell his story about racism to whoever he felt were the right people. Later, in Bakersfield he saw the same policeman distributing parking tickets and laughed to himself. Flores said he felt instrumental in making him lose his job.

Flores was born in El Paso, Texas, in 1920. He was raised there by his mother and grandmother.

My father abandoned the family, Flores said. So, while his mother worked as a laundry woman to support the family, his grandmother raised him in their two-bedroom apartment.

Flores had what he calls a normal childhood.

We would play basketball up on the street... We had battles, nothing serious, with the kids from the other neighborhood, he said of his circle of neighborhood friends. He often played games with the other children, who called him Fito. This became his nickname, making fun of his grandmother constantly yelling Rafaelito! for him to go inside.

Flores friends were also responsible for making him conscious of race when they began to call him el negrito (small Black one). He wondered why they called him this, and they said they were comparing him to his mother, who had a light complexion and blue eyes.

Time not spent in school or playing with friends was spent working to help his family survive. Flores said that, throughout his childhood, he worked as a shoeshine boy, a paperboy and a golf caddy.

After completing middle school, Rafael entered high school but left after the first semester. Before he left, Flores said, he noticed one day that a girl in study hall looking at him and smiling. He asked her why she smiled at him so much, and she looked down at his shoes and giggled. For the first time, he realized that his tennis shoes had holes in them, and his toes were sticking out. Flores was immediately set on getting a new pair of shoes. After working for about a month, he bought his first pair of leather shoes. He recalled that his time at work made him realize that making money was more vital than going to school, so he dropped out.

There was no work in El Paso because of the Great Depression, so 15-year-old Flores hopped on a train to Los Angeles with a friend. The train ride took five days. When they arrived, they stayed at a friends for one night, then immediately looked for jobs. Flores began to work at a laundry the next day. They did not have enough money to stay in a hotel, so the two boys slept on cardboard and papers in a tent behind a billboard for two weeks. Flores said jokingly, I consider myself one of the first homeless.

He was washing pots and pans at the famous Brown Derby, earning enough money to rent an apartment two weeks later.

After settling in Los Angeles, Flores got sick with appendicitis. His stepfather came from El Paso to take care of him, putting him in his stepsisters house until he got better.

Once Flores was healthy, he moved with his stepfather to Bakersfield to work as cotton pickers. In January 1936, his mother moved to Bakersfield to be with her family. While living in Bakersfield, Flores maintained a pleasant, social life. He said that he made friends and dated many young ladies. He loved to dance the jitterbug and would drive with his friends to the Palladium in Los Angeles to dance as often as they could.

After serving in the Army, Flores became a Republican because he felt the local Democrats were not doing anything to help Mexican-Americans. Then, Flores voted Democratic because, the Republicans were not doing anything either, so I changed back to my original Democrat, he said. After he was divorced, he also joined Parents Without Partners in nearby Whittier, Calif., where he met and socialized with other single parents.

While living in Pico Rivera, he worked for Bethlehem Steel for a couple of years and then took a job with a plastics company as a maintenance helper. He was laid off after the company was sold, and Flores went to work for a Rockwell International division that was later sold to The Boeing Co.

He worked on the production line of the electrical department, and then went on to the logistics department, working as a liaison between the engineering unit and the production line. In this position he said he witnessed much discrimination. He founded the Chicano Forum, which helped top management conduct interviews and also complained about any discrimination. As a result, he said, many Chicanos were promoted.

He believed, however, that he was blacklisted and laid off as a result. He filed a discrimination complaint with the State of California, and eventually won his case, he said. Flores went on to work for 28 years with the company.

Flores did not think all the stories of the wars were told accurately. He believed the government did not want people to know everything, especially why we get into wars. Flores was in favor of World War II and felt that America did the right thing. He also felt that Latinos were underrepresented in war movies because they were discriminated against in general.

We are all human beings, Flores said that he wished people would recognize, especially in this nation, where we are all free to express ourselves.

Flores advice to other Latinos was to, look at the upside of life and look for things that make you happy. He believed discrimination continued and Latinos needed to try to overlook it, but if given the chance, fight for the right, Flores said. He said, as Latinos, lets help ourselves.

By the time of the interview, Flores said, throughout his 90 years of life, he learned the most important lesson was: Believe in the good Lord, he is always there to help us out.

Without a doubt, my time in the Army was very instrumental in my overall education. It seems like I have been blessed; from Army veteran to cotton picker to aircraft company employee to co-founder and president of an escrow company that began operation after I left Rockwell. God Bless America. Amen.