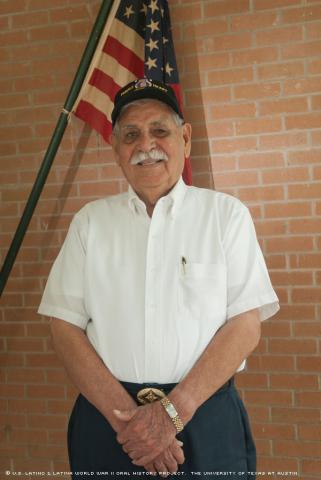 Interviewed By:
Rafael A. Medrano

Rafael Cantu Medrano left his Texas hometown to join the military in 1940. Four years later, he landed at a Normandy beach four days after D-Day. He was wounded in combat and was awarded a Bronze Star.

Medrano fought to support his family while he grew up during the Great Depression and then fought all the way to Germany.

He recalled serving at Fort Sam Houston, in San Antonio, and Camp Atterbury, Ind., before being shipped overseas. Medrano landed on the Normandy beaches on June 10, 1944. His unit fought in northern France and in Germany. What he remembered most from combat was “that it was hell.”

He said that he spent most of his days in Europe either in foxholes or on the move. “It would rain, snow, and all that crap,” said Medrano, adding that during his time on the field, the one thing he missed most was a place to take a bath.

Medrano didn’t have a lot to say about the day he was wounded. “The only thing I felt was something warm running down my arm, and I looked and saw my hands filled with blood.” He was shot in the left arm. Medrano was taken to a field hospital for medical care and then was sent to England for further treatment.

Medrano’s grandmother received letters saying that he was missing in action and ultimately died of his wounds. It wasn’t until after his 30-day stay in the hospital that Medrano was allowed to write home, and his family was reassured that he was still alive.

Medrano was born on May 23, 1920 in Fannin, Texas His home life revolved around the economic struggles he and his family faced during his childhood. He spent most of his time trying to find work to help his mother.

After his father left their family of six, Medrano remembered his mother Rafaela worked odd jobs to make ends meet for her children. “She was a mother and father to us,” said Medrano.

Medrano was the oldest child, and he took seriously his family role. He joined his mother in working odd jobs to provide groceries for the family. At one point in his life, Medrano remembered, he was so poor that he couldn’t afford the shoes needed to play on the local basketball team. He played the games barefoot.

“The Great Depression affected us in every way because there wasn’t any work,” said Medrano. “No jobs. If you happen to find a little odd job you’d do it and move on.”

The school Medrano attended in Fannin was a two-room building that had first through fifth grades in one room with a second room housing the sixth through tenth graders. “I went up to the sixth grade, and I quit school and went to work,” said Medrano. He earned his GED when he was 64.

Medrano served in both the Civilian Conservation Corps and the Works Progress Administration starting in 1938. Both programs were implemented after the inauguration of President Franklin D. Roosevelt on March 4, 1933. “In the WPA, we usually built bridges, roads -- and the same thing for the CCC,” said Medrano.

On Oct. 8, 1940, Medrano, then 20 years old, decided to enlist in the Army. He said his mother did not want him to go. He recalled that none of his hometown friends wanted to join up, so he went off to join the military alone. Medrano was sent to basic training in San Antonio for 13 weeks, starting in Company B, 9th Infantry, 2nd Division.

It was there that he met Josef Neros, a Mexican-American from Rufio, Texas. The two became best friends and shared a tent during their time in basic training. After Medrano was transferred to the 83rd Division, he kept in contact with Neros through letters.

Medrano was awarded the Purple Heart and the Bronze Star for his participation in the war. He was discharged on July 3, 1945, as a private first class.

Throughout his participation in WWII, Medrano said he experienced no racial tension overseas. “There was no ‘you were Mexican, you were white,’ ” said Medrano. “Everybody was alike.”

When he returned to the U.S., Medrano worked for the Texas Highway Department from 1949 until his retirement in 1983. Medrano married Sonia Vidaurri on Sept. 27, 1946, and had five children -- three boys and twin girls. Vidaurri passed away in 1970. Medrano married again on Dec. 6, 1949, to Francisca “Mary” Trevino.