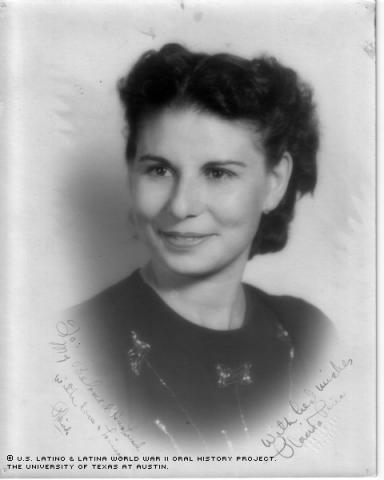 Just as clearly, she recalls traveling thousands of miles and hundreds of hours across land and water with her husband, Air Force Sgt. Raymundo M. Barrera, and their six children.

Two of the children were born in Japan, and Barrera also lived in Korea, where her husband was an adviser to the Korean troops.

Born July 13, 1926, to Reynaldo Peña and Josefa Ramirez Peña in Guerra, 40 miles northwest of Roma, Barrera was the oldest of three children. As a child during the Depression, the economics of the country and the availability of goods were sharply different from today, she says. For example, coffee was 10 cents per pound, the average working wage was 25 cents an hour, a stamp cost three cents and an average meal consisted of beans, rice and a little meat.

"It was a really strange life back then, especially during the Depression," Barrera said. "It was a hard life, but we never did without."

Relief food assistance sent to the county commissioner provided some in Guerra with apples and flour, but the politics beneath the welfare-like assistance did little to help the community, she says.

"The county commissioner would hold back relief goods because it wasn't profitable for the stores in town," Barrera said. "We really didn't get too much help from anyone or anything."

Barrera remembers riding to school as a 15 year old with her aunt on Dec. 7, 1941, when Japan attacked Pearl Harbor. She recalls also arriving at Mission Middle School auditorium on Dec. 8 to hear President Franklin D. Roosevelt declare war on Japan. Three days later, Italy and Germany would honor their alliance with Japan and declare war on the United States.

Upon graduation in 1945, Barrera enrolled in Texas A&I University at Kingsville with aspirations of becoming a nurse or schoolteacher. Although she thought it would be an easy task, attending college proved to be more difficult than expected, and she withdrew three weeks later.

"I cried because I wanted to go to school, but financially we couldn't afford it," said Barrera, adding that her father was suffering from multiple sclerosis at the time.

Years later, in 1948, Barrera would meet her soon-to-be husband while visiting her aunt in Mission. But it wasn’t their first encounter.

"It was funny because I knew him while in school in Mission, Texas, when I was 14 years old," said Barrera, adding that they were neighbors. "But he was too quiet."

Barrera says Raymundo seldom talked to her when they were young. But Raymundo Barrera continued to pursue her through the coming years, courting her with constant letters while he was stationed in Delaware as a soldier with the U.S. Air Force. He’d been drafted into the Army on March 31, 1944.

"He proposed to me by mail, our courtship was by mail and he even sent the rings by mail," Barrera said.

After their marriage on June 4, 1950, the couple began a military life of constant moves. Equipped with a $1,400 Buick convertible and, by the end of it all, six children, the Barreras were soon to be world travelers, moving from sweltering hot climates to fiercely bitter winters -- typhoons to earthquakes.

In 1950, Barrera traveled by car with her husband to Cleveland, Ohio, where he received orders to transfer. During her time there, she was trained as a nurse at the Cleveland Lutheran Hospital and earned sixty-five cents per hour. Months later, the couple moved to Rome, N.Y., and then to Presque Isle, Maine.

"Maine was very primitive," Barrera said. "We had no gas ... were without a refrigerator."

They used charcoal stoves, she said, "And because it was so cold, we had an icebox on an outside window ledge where we would keep our milk, but then it would freeze and expand, and there was milk everywhere."

On June 24, 1951, before Raymundo moved the family back to Mission for two months, they had their first child, Nora Myrna Barrera in Presque Isle, Maine.

In 1952, the Barreras were transferred to Fort Ethan Allen, Vt., where Raymundo Jr. was born on Jan. 26, 1953. Raymundo was sent to Korea in 1954 as a sergeant, and Barrera, who was expecting a third child, moved back to Mission, where Cynthia Yvonne was born on April 5, 1954. Upon returning from Korea, Raymundo was assigned to Wichita, Kan., and again, Barrera joined him. There, Sandra Yvette was born on May 16, 1956. Soon after her birth, the Barreras received new orders to move, this time to Tachikawa Air Force Base in Tokyo, Japan. The Barreras traveled 19 days in a ship across the Pacific Ocean from Seattle, Wash. Barrera shared the voyage with her four children, 170 other women and children and hundreds of troops. The ship traveled through the Yellow Sea to Inchon, Korea, to drop off some soldiers and pick up others who were to be returned to the U.S. by Christmas.

"It was difficult, but that's life," Barrera said.

The Barreras lived in Tokyo for three years. Raymundo served as the Sergeant of Communications and Supply.

According to Barrera, the Japanese viewed most Americans as likeable people and loved the American children; however, there were many demonstrations and protests against the war and the nuclear ships that landed in Tokyo Bay.

"Sometimes I felt as if they didn't want us there," Barrera said. "We were interfering with their lives."

Carlos Humberto and Judith Margot rounded out the Barrera family, both born at the Air Force hospital in Tokyo, in 1957 and 1959.

After the birth of Judith, the Barrera family moved back to Texas -- a 36-hour-flight with 6 children – and Raymundo was assigned to Laredo Air Force Base. But in 1963, he was re-assigned to Korea, and later that year, his family flew overseas to be with him. The following year, he was re-assigned to Japan, and again, the family followed. They stayed there until July of 1968.

The family was sent to Forbes Air Force Base in Topeka, Kan., on Sept. 30, 1969. Raymundo retired at the rank of Technical Sergeant and relocated to Laredo, where he and Barrera pursued additional education.

In 1971, Barrera began taking courses at Laredo Junior College and received her degree in 1978 from Texas A& I University at Laredo, with a major in political science and Spanish, at the age of 52. Her husband received a Bachelor of Science degree in political science and law enforcement. Both taught in the United Independent School District in Laredo. He retired from teaching in 1990, and she retired a decade later.

Throughout all the struggles and travels during the war, Barrera says she’s pleased with her life and experiences.

"I am very happy with the way my life has turned around. I feel that I have accomplished a lot," she said.

At the time of the interview, the couple has 22 grandchildren and nine great-grandchildren.

"We have a happy life and we thank God for that," Barrera said. "Remember, we all have the opportunity to be what we want to be. Just have a lot of patience, tolerance and enthusiasm. It is up to the individual."

Mrs. Barrera was interviewed in Laredo, Texas, on September 28, 2002, by Roel Virgilio.