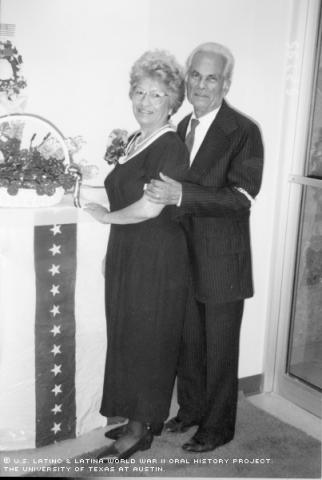 Peter De Leon considered himself lucky after returning home to Chicago after serving in World War II. At least 10 of his neighborhood friends came back in body bags.

The closest De Leon came to dying was a kamikaze attack off Okinawa in the Pacific Theater. The kamikaze pilot was aiming for a larger ship but missed. The gunners hit the plane, so it only hit the side of the ship.

From August of 1943 to June of 1945, De Leon served as a fireman on a destroyer escort ship. He saw the Marshall Islands, the Philippines, Guam and Okinawa, though he never set foot on them. The experience of the war allowed him to meet and bond with people of different backgrounds. The war gave him an appreciation of life as well.

"When you're in there, you come across a lot of people from different parts of the country and everybody has their own ideas," De Leon said.

As a fireman, his primary responsibilities were to work in the engine rooms and stand watch for incoming attacks. As an engineer, he worked maintenance, diesel engines and controls.

De Leon was born April 29, 1917, in San Antonio, Texas, the oldest of two sons and two daughters of Julian and Jennie Vera De Leon, two Mexican natives who fled their home during the revolution. When De Leon was a teenager, his parents again moved north for economic opportunity, this time to West Chicago.

De Leon's father worked any jobs he could. During the summer months, he left Chicago to labor in fields. Jennie Vera De Leon was a homemaker. Neither spoke English. Trying to support a family in Depression-era Chicago was difficult, but people managed.

In 1933, when De Leon was 16, a car struck his father as he stepped off a bus; the driver never stopped to offer help. With his father's death, De Leon became the man of the house.

As the oldest child, De Leon seriously considered dropping out of school to earn a paycheck for the family. But his mother insisted he stay in school. He eventually became the first in his family to graduate with a high school degree in 1937. After graduation, De Leon worked in a lamp factory to support the family.

In the first couple years of WWII, De Leon's status as head of the household made him exempt from the draft. But by August of 1943, the draft board informed him he was eligible for the draft. Instead of waiting for the inevitable, De Leon volunteered and received training at Grand Lakes.

Following the war, De Leon returned to Chicago and his job at the lamp factory, where he did the wiring. He tried to reestablish pre-war friendships through a veterans group, only to learn many of his friends didn’t come back alive. Fortunately, however, one of the members was Henry Yarbrough, who introduced De Leon to his future wife, Theresa Bonita. De Leon married Theresa in 1953.

Around 1954, his wife's brother moved to California.

"My wife said, 'My brother's always been in my life -- I want to go with him,'" De Leon recalled.

So off to Los Angeles the couple went, bringing De Leon's mother along, too. As a member of the American Federation of Labor electrician's union, he secured a job at another lamp factory in the Los Angeles area. He retired in June of 1982.

Theresa passed away around 1982, shortly after his mother. In the following years, De Leon traveled, visiting friends and family in Chicago and San Antonio. In 1988, he moved to San Antonio to be closer to family.

At age 68, he met and married Zulema Blanca Estrada in 1984. It was the second marriage for both of them.

"Life has been pretty good up until now," De Leon said.

Blanca, sits nearby, listening. He is quick to add that his family gave him good genes -- his mother and grandmother both lived into their 90s.

"If they feel like dancing, we dance. I sing to them, we sing together," Blanca said. "I make a pretty lively party."