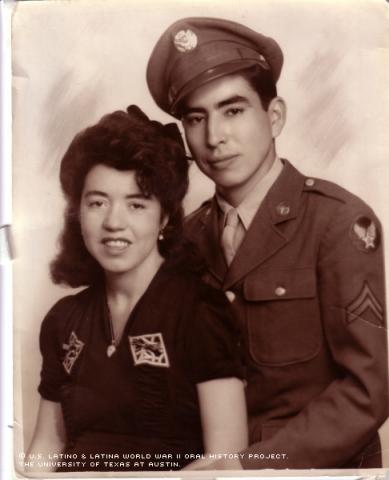 Memories of childhood and his mother's mouth-watering cooking remain fresh on Pete Dimas' mind. Sopapillas, chili with carne sauce and delicious beans are some of the foods he remembers.

"Mother was an excellent cook. You name it, she had it. She could do breakfast too," Dimas said.

Although he grew up in the Depression, Dimas says his family didn't have a hard time as far as eating was concerned.

Mom's cooking was in stark contrast to his culinary experiences during World War II. As an Army cook, he was challenged to create tasty food from the traditional Army chow. He later met an even bigger cooking challenge when he was put in charge of doling out bread and worm-infested soup to fellow prisoners of war in Europe.

Dimas was born in 1920 and lived with his parents, four brothers and six sisters in Albuquerque, N.M. He attended an integrated school until he quit in the seventh grade.

Dimas' father worked for a railroad company and made a decent salary to provide for his family. The large family also picked cotton for extra money.

On Sundays, Dimas would borrow his parents' car and go driving with friends. While riding on Dec. 7, 1941, he and his friends heard about Pearl Harbor on the radio.

"We were stunned. We didn't expect it, and we said, 'You know what? We're going to have to go.' That's the first thing we said," Dimas recalled.

At 21, he volunteered for the U.S. Army. Two brothers had enlisted a year before, and he was ready to join them.

Dimas' experiences in the Civilian Conservation Corps helped prepare him for Army work as a cook, he says. While in the CCC, he became a "dog robber," which meant he took care of officers by serving meals, cleaning their quarters and fixing their beds.

Although he remembers that Latinos were made fun of in the CCC, Dimas says he had plenty of friends and that the teasing was no big deal.

He entered the Army on July 8, 1942, in Santa Fe, N.M., and was sent to Shepherd, Texas, for basic training. He attended cooking school, and later went to Yakima, Wash., then Arizona.

He’d been in Arizona about a year when he volunteered to transfer to ground troop units going overseas.

"I thought, 'Well, the war's pretty near over anyway, and besides, I don't mind going over there,'" Dimas said.

He was transferred to Indiana and started combat training. In addition to cooking, he also learned to shoot in a firing range and had to finish obstacle courses. His favorite weapon was the M-1 rifle, he said.

"I felt more safety with it, like I could survive better. It was a little heavy, but your life depends on that," Dimas said.

Assigned to Company B of the 423rd Infantry Regiment, 106th Infantry Division, Dimas went to New York by train and boarded the Queen Elizabeth, a British ship, to go overseas. He arrived in Scotland and took a train to London, occasionally hearing some bombs. His unit arrived in France on Dec. 5, 1944, and moved north to Luxembourg.

Dimas recalls being packed in a truck with as many soldiers as could fit, with no room to stretch his legs, not knowing where they were going. He soon found out they were going to the front. He’d cook in holes and use trenches the Germans had dug, littered with German helmets and guns sticking out of the ground. The situation was getting serious.

One night, while he was on sentry duty, a shell came so close that Dimas jumped into a hole and knocked down four or five men with his rifle.

Then, on Dec. 16, 1944, he heard the haunting sound of what he called "the Screaming Meemies'' -- rockets launched from atop truck beds and tanks.

The fight -- known as the Battle of the Bulge because the German attack made the battle line look like a man's protruding belly -- had begun. It was the last major German offensive on the Western front during WWII.

After engaging in combat and retreating, the Americans surrendered. Dimas and another soldier carried a wounded comrade on their shoulders. The Germans allowed Dimas to make a stretcher with branches and an overcoat and take the wounded soldier to the road to wait for the Red Cross to pick him up.

Dimas then returned to the Germans with his hands on his head, the sign of surrender. That night, the prisoners of war walked through a ruined city, and someone started singing "God Bless America."

On Saturday, March 3, 1945, the Phoenix Gazette published a small article under the headline "Surprise Letter reveals Son Prisoner in Germany." A portion of a letter to Dimas' parents was published. Dimas had written: "So far I am getting enough to eat and I have a place to sleep. As soon as the war is over with Germany, I will come home. So let's make the best of it and hope it won't be long."

He and his fellow soldiers were held for six months, during which time many soldiers became very ill. Dimas recalls seeing a prisoner get shot in the head because he was too sick to get up and move. They were given one loaf of bread for seven men, with one teaspoon of sugar or marmalade and occasional soup. It was his job to divide the bread fairly. Sometimes the soup was worm-ridden, and the soldiers would just pick out the worms and eat the soup. Many got sick.

"I saw quite a few people that died while I was a prisoner," Dimas said.

They reached the Elbe River and the Germans, being chased by the Russians, couldn’t cross. U.S. soldiers rode across in a canoe and liberated the prisoners of war. Dimas was flown away on a C-47 cargo plane to France.

"You could hardly believe it when you were liberated. I was jumping up and down even though I felt sick," he said.

He married Dilia Irene Basurto, a woman he’d met in Arizona, and the couple had two sons and three daughters: Alice, Sylvia, Pete, Richard and Patricia.

While in the Army, Latinos were often made fun of, but Dimas says they’re more accepted now. More Latinos are being viewed as Americans, he says.

"I can say that there is no other country in the world with the government that we have and the people that are in it. It's worth fighting for, and anybody that joins the service, I think it's a big honor because it's worth it," Dimas said.

Mr. Dimas was interviewed in Phoenix, Arizona, on January 4, 2003, by Norma Gallegoz.