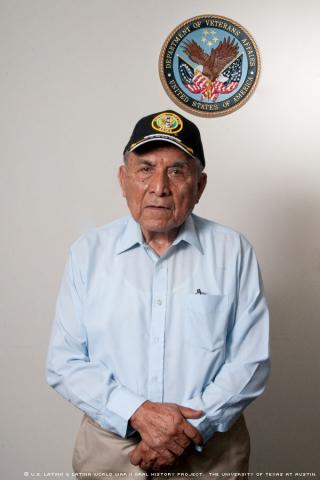 Paul Ybarra does not see himself as a hero, even though he survived the bloody Normandy Invasion and a mistaken Allied bombing, and he was about to be deployed to the Pacific when World War II ended. All he did, in his view, was perform his duty to his country.

When America joined the war in 1941, Ybarra was 17. But he was drafted almost immediately after turning 18. Most of his friends and two of his seven brothers were also called to serve.

Leaving home for the first time, Ybarra went to Tyler, Texas, for basic training. Throughout the training, none of the servicemen were told where they would be deployed, or what to expect when they got to their unknown destination. The culture, terrain, and battle plans were all kept from the men, but Ybarra put his faith in the government’s decisions. The daily marching and training soon ended, and his platoon was sent to Fort Meade, in Maryland, to await deployment.

Late one night in May 1944, Ybarra was boarded onto a ship holding 4,000 men. Two weeks later, they arrived in England. Ybarra was part of the forces that invaded France’s Normandy coast, spearheading the re-capture of Western Europe from the Axis forces led by Nazi Germany.

Ybarra remembered that a multitude of barges crossed the English Channel, and the early morning light showed bodies of men who had fallen to Axis gunfire floating in the water. He also recalled that the invasion force was not allowed to stop and offer any aid.

Ybarra and his fellow servicemen stormed the beach, securing a mile and holding fast for a month until they could move further inland. But a miscommunication between air controllers and pilots led to Allied planes bombing their own men, including Ybarra’s unit, Company D, on Normandy Beach on July 21, 1944. He was one of only two men left alive.

As they progressed from the beach towards Paris, Ybarra said he occasionally pockets of German soldiers. Small battles scattered the path to Paris until Ybarra’s unit and other Allied forces helped liberate the city.