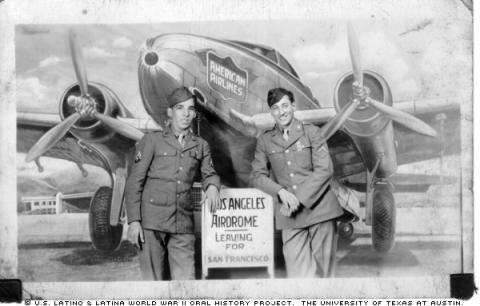 With 18 pairs of boots and 15 cowboy hats, Seventy-eight-year-old Pablo Cavazos is a walking specimen of Texas pride.

His advice to young people is simple: Get a good start in the military.

"If they go into the military, they'll learn a lot of things there," Cavazos said.

In 1943, Cavazos was drafted into the service on Jan. 14, 1943, and left his family in Corpus Christi, Texas, to receive training in California as a military carpenter, although carpentry wasn’t unfamiliar work to him. At age16, Cavazos had begun work at the Corpus Christi Naval Air Station as a welder's and carpenter's helper. Three years later, he was a soldier in World War II.

Cavazos was shipped to England in 1944, where he worked as a truck driver. It took nine days to travel from Boston, Mass., to Liverpool, England, where he stayed until 1946.

Although he made only $66 a month, he doesn’t have many complaints. In his own words, his military experience was "pretty good." In fact, by his recollections, everything was "pretty good," including the people and his interaction with them, the food and the ship.

"I enjoyed all my experiences," wrote Cavazos to the Project after his interview, "especially when working as a truck driver, moving camps."

He describes his days as "busy" since he was constantly on the road, loading and unloading his truck.

After the war, Cavazos was discharged and went to work in Chicago, where he met Gloria Luña, now his wife of 51 years. In 1950, he came back home to Corpus Christi, bringing Gloria with him. The couple had a daughter, Esther, and now have a grandson, Michael.

Cavazos worked for a while as a truck driver before going into the welding business. He was then employed by Lone Star Liquor Distributing Co. for 17 years.

A self-taught man, he’s called "Mr. Fix-it" by his friends and family. From TVs to radios, he’s the handyman people often come to for repairs. His relatives say he can fix anything.

The war is over now, but Cavazos still likes to meet in a café called Taqueria Mexico with his buddies to talk about the old days. Cavazos likes to call their meeting spot "Bengay Café" because it’s a hangout for "old-timers,” he says.

Cavazos was born in Corpus Christi on Jan. 25, 1924. His parents, Jose Guerrera Cavazos and Manuela Peña Cavazos, were originally from Monterrey, Mexico. They moved to Corpus in 1915, the year they were married. His father worked in the Corpus Christi Cotton Mill to provide for his family, which included three boys -- all of whom served in the military -- and two girls.

In Cavazos' home sits a framed picture of him in a white shirt and white tie, wearing his military insignia and hat. The photo was taken shortly after his entry into the service, and his parents framed it with both the Mexican and American flags, as a symbol of both his patriotism to the United States and his Mexican heritage. The plaque underneath reads: "Pablo Cavazos entered American forces January 22, 1943. May God see that he returns after performing his duty."

Mr. Cavazos was interviewed in Corpus Christi, Texas, on July 20, 2002, by William Luna.