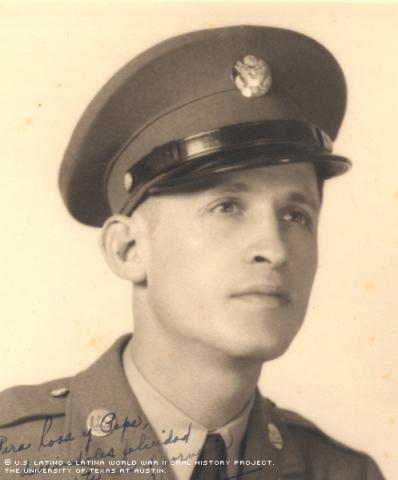 Refusing to be segregated or treated as second-class citizens, Oswaldo Ramirez and about 15 of his Mission, Texas, schoolmates boycotted the new junior high school built solely for Spanish-speaking students.

Instead, the youths commuted for the entire school year to other schools in the Rio Grande Valley, including La Joya, McAllen and Edinberg – some as far as 30 miles away – to make a point. Fortunately, the civil disobedience tactic worked: The school district bent to legal pressure applied by the Spanish-speaking community and converted the new building into an integrated trade school.

“To me, it was quite a stimulating experience to mix with Anglo students,” Ramirez said. “The approach, the attitude and treatment we received from our Anglo teachers were very commendable.”

Such was the life of Ramirez, who always aspired to a world beyond South Texas. In high school, he envisioned a life as a diplomat, which he hoped would take him throughout Latin America. His scholarly attitude caught the school staff’s attention – teachers encouraged him to take public-speaking courses, and the school superintendent took him aside, encouraging him to pursue a career in the U.S. Foreign Service.

“I valued education so much. I took some special courses during the summer being offered by some of the high school teachers,” he said. “[I] wanted to go to a university.”

Ramirez attended Edinberg Junior College and the University of Texas at Austin, taking courses that would help him qualify for the Foreign Service. He graduated from UT in 1938 during the Great Depression, however. Money was so scarce he could barely afford to return home.

Through perseverance, he secured a job in McAllen as an assistant draftsman for Beard’s Oil Map Company, which specialized in producing maps for the oil industry. He earned $8 a week.

While at UT Austin, Ramirez was involved with the Pan American Student Forum, an international student organization. He remained an active member after graduation and was head of the Texas chapter.

In June of 1940, he attended the group’s national conference in Biloxi, Miss., where he was introduced to his future wife, Lillian Hollingsworth, who was president of the Biloxi chapter and state forum. The two corresponded and visited twice before the fateful Sunday the Japanese attacked Pearl Harbor.

Ramirez enlisted in the Army the next day.

“We had to do something. There was no future for me in the Lower Rio Grande Valley,” he said. “I knew the only way to get anywhere was to get involved.”

Ramirez qualified for officer training school at Fort Benning, Ga., after a short training stint at Camp Roberts, Calif. He then trained for nearly a year with the 86th Infantry Division at Camp Howze, Texas.

On March 23, 1943, he married Lillian, and in December of that same year, he was sent to the European Theater as a replacement officer. His first son, John, was born while he was overseas. The couple would have six more children: Catherine, Paul, James, Mary, Barbara, and Margaret.

Ramirez was eventually assigned to lead an 81-mm mortar section in the 3d Battalion of the 16th Infantry Regiment of the 1st Infantry Division. For the next several months, he trained with his unit, whose members were seasoned combat veterans who’d fought in North Africa and Sicily.

“The intensive exercises … were crucial for me because I knew these men would be looking to me for leadership in combat,” he said in his memoir, “The Fire Within.” “I had to win their confidence.”

Confidence was key on the battle field. Several days prior to the invasion, Gen. Omar Bradley came to speak to his troops and boost their morale.

“‘You fellas are lucky that you have been selected. You are going to be in the initial wave of the invasion,’” Ramirez remembered Bradley saying. “‘You’re lucky because you’re going to have an air cover that no invading force ever had.”

Allied planes were supposed to drop bombs on Omaha Beach, creating craters in which arriving troops could jump into for cover; however, June 6, 1944, was overcast, making air-bombing raids impossible. When Ramirez’s company and others arrived in landing crafts, the Germans stationed in the bluffs picked them off with ease.

Lucky for Ramirez, the driver of his landing craft observed the slaughter and dropped his men off approximately 200 yards from shore. Although they had to trudge toward the beach carrying their weapons through the freezing water, the driver’s maneuver saved their lives; Ramirez’s group didn’t lose a single man. Finding utter chaos on the beach, he joined another company commander, taking cover in a fold in the ground that offered temporary protection.

‘“I’ve got bad news for you,”’ the commander told him. “‘We’re losing officers. There’s nothing we can do right now, but can you help the wounded guys and get them here for protection?’”

Ramirez braved enemy fire and rescued the fallen men. He grabbed seven soldiers, all shot and dying; some were his buddies.

“That experience was hell,” said Ramirez, who’d win a Bronze Star, the military’s fourth-highest honor, for his actions on the beach.

Fortunately, arriving rifle companies enabled the Allied forces to push back the Germans and move to a nearby town. Ramirez was just thankful to be alive at this point.

For the next five weeks, Germans hemmed him and the Allied troops in on all sides. Learning of Ramirez’s map-reading and mapmaking skills, the battalion commander transferred him to the 3rd Battalion as the liaison officer. Somehow, they had to break out of Normandy.

“I had to contact division corps commanders, colonels, generals, and find out the big picture,” he said. “I knew exactly what was going on. They liked my work because I was a good artist and I got good information and could communicate well.”

The eventual arrival of General George S. Patton and the 3rd Army allowed the troops to escape and push into Germany. The 1st Infantry Division went on to liberate Liege, Belgium, and eventually crossed the Siegfried line. Ramirez and the 16th Infantry Division would be there to help capture Aachen and go on to fight at Hamich.

Ramirez was awarded a second Bronze Star while at Hamich in November of 1944. According to the citation, he “fearlessly crossed coverless terrain vulnerable to heavy enemy fire, exchanged tactical information with the commander of a friendly organization, and returned to his battalion with a revised plan of attack.”

The following month, he fought in the Battle of the Bulge, where he was wounded, which earned him the Purple Heart. The Army discharged him in October of 1945, at which point he returned to the States.

He took a position with the U.S. Veterans Administration’s office in New Orleans. While there, he capitalized on the GI Bill and enrolled in evening classes at Loyola University in New Orleans, earning his law degree in 1954.

Ramirez spent the rest of his career working for a number of major companies that sent him and his family to Latin America, including assignments in Honduras, Panama, Cuba and Peru. He retired at age 70 after 18 years with Texaco.

Up until his 2008 passing, he dedicated his life to helping the less fortunate through church-related services, including coordinating rosary services for inmates at the Travis County Jail.

“My advice [to young people] is get yourself educated, develop your God-given skills and never give up,” he said.

Oswaldo Ramirez was interviewed in Austin, Texas, on October 8, 2001, by Robert Mayer.