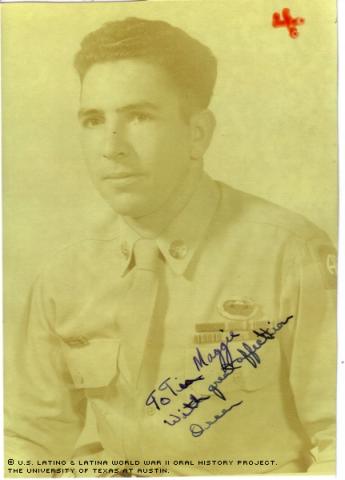 At 16, Oscar Villarreal was too young to vote in 1943, but he wasn’t too young to serve his country in World War II by joining the Navy.

Villarreal was born March 1, 1927. In order to join the National Youth Administration, he altered his birth certificate when he was 14 so he could say he was a year older. He wanted to learn welding and carpentry to get a job. The NYA was established in 1935 by President Franklin D. Roosevelt to give young people jobs and job training. In some cases, high school and college students received scholarships and grants; in other cases, young people who weren't in school got job training. When he returned from his studies in 1942, the NYA only had openings in California, so he decided to enlist in the Navy instead.

"When I got back from the NYA, I went to the Army recruiting and took the physical, but I didn't pass it because I weighed 106 pounds. Then they asked me if I wanted to join the Navy, and I told him yes," Villarreal recalled. "He said, 'Before you go to the examination, try to eat at least eight or 10 bananas so you can make the weight.'

"When I got to Houston to go take the physical examination, that's exactly what I did," Villarreal said. "And I didn't fail the exam."

But getting permission from his parents was another hurdle for Villarreal.

"I kind of tricked Mom into signing," he confessed.

Specifically, he told his parents he had a job offer as a welder in Richmond, Calif., at the Kaiser shipyard.

Villarreal was inducted in Houston and went to basic training in San Diego, Calif. He was then sent to San Francisco for a while before leaving for Pearl Harbor on July 3, 1943.

Villarreal went to Nuemea, a replacement depot on New Caledonia Island, where there were members of all the Armed Services.

In the beginning of August, Villarreal boarded the USS Cleveland and made his way toward the Fiji Islands. The Cleveland was part of Cruiser Division 12, which also included the USS Montpelier, the USS Denver and the USS Columbia. On Oct. 31, 1943, Villarreal finally saw his first action in the war.

"We went up to give fire support to the landings of Marines near Georgia Island and Bougainville," he said.

His ship also got to take Baka Island.

"We bombarded all night,'' Villarreal recalled. "One advantage that we had over the Japanese was that we had radar, and we got our orders from the firing officer that was stationed at the radar to give us the exact locations of the ships."

As Villarreal recounted his story, his voice started to crack; he reached for his coffee cup and took a sip. His eyes welled up at times, but he pressed on with the details of his experience in the war. According to historical accounts, the USS Cleveland was attacked by four Japanese cruisers. The Cleveland in turn sank the Japanese Sendai and sent the others packing.

"Marines in there that were manning the CBs from the Guadalcanal said they could hear the thunder and could see the lightening of the battle going on even though we were quite a ways out," Villarreal said.

At 7 a.m. the next day, Japanese torpedo and zero planes came in; U.S. troops had already requested air support because they were running out of anti-aircraft ammunition. Torpedo bombers played an important role in the air groups on U.S. and Japanese aircraft carriers. The bombers carried a shorter version of the submarine, and deck-mounted torpedoes.

"If it hadn't been for the P-38s and P-51s, we would have lost a couple of ships. They saved our tail," Villarreal said. "We had wasted most of our ammo. We came back, and we were supposed to also assist in the Marshall Islands at that time, but we were out of ammunition and could not support the troops there."

Finally, during Christmas of 1943, the troops received ammunition for their next campaigns.

The Gilbert Islands had to be secured; to do so, the U.S. first bombarded Saipan.

"They had told the natives there that we were animals, and a lot of the families jumped off the Suicide Cliff, which we later named it," he said, pausing to compose himself. "Full families with babies and children, and you could see their bodies floating down the ships. We were close by."

Later, while still aboard the Cleveland, Villarreal helped escort the USS Indianapolis from Pearl Harbor to Guam.

The ship went up to the China Sea in late April to patrol the border between China and Japan. While there, a typhoon wrecked some of the airplanes on the deck.

"It was dark getting out of [the typhoon]. Our ship would rock and roll, go down, up, sideways. That's how we lost one of our destroyers; it went down and never came up,'' Villarreal said. "And that's how we lost a lot of planes. They would break from where they were anchored and split in half."

"Early in the morning a lonely Japanese torpedo plane, which came very low in the water, came back on our aft, which is the back of the ship, and it must have been about 25 feet from us. They let go of a single torpedo and hit the back ... of the USS Pennsylvania. I think there was about 17 killed and a lot wounded," he recalled.

The Pennsylvania had been repaired after sustaining damage at Pearl Harbor.

"It was funny though that it was one of the last ships to be hit by the Japanese," he said.

Villarreal says he served as Honor Guard for General Douglas MacArthur in June of 1945.

"We were ordered from Okinawa [Buckner Bay] to take General MacArthur from Manila, Philippines, to Borneo," he said.

Before leaving the Navy on Feb. 6, 1946, Seaman 1st Class Villarreal was involved in nine campaigns and spent 29 months overseas. He earned many honors for his service, including the American Campaign Medal, World War II Victory Medal, Navy Occupation Service Medal, Philippine Liberation Medal with one star, Republic of China Medal and Asiatic-Pacific Campaign Medal with eight campaign stars, symbolizing the eight campaigns in which he was involved.

His two brothers -- Fabricio Jr., who served in Europe and participated in the battles in Normandy and was awarded the Purple Heart, and Roberto, who served in the Pacific as a minesweeper -- also returned safely.

Except for his time in the military and two years his family spent in Corpus Christi, Texas, when he was a child, Villarreal's entire life has been spent in Laredo, Texas. He grew up there with his mother Socorro Lopez Villarreal, salesman father Fabricio Villarreal, six brothers and two sisters.

After the war, Villarreal worked at the post office in Laredo from 1951 until he retired in 1976. He also joined the Army Reserve for a few years after he was discharged from the Navy.

On April 23, 1950, he married Amparo Segura. In 1953, he quit the reserves to spend more time with Amparo and the two children they had at the time. The couple eventually had 10 kids: five sons and five daughters. One of Villarreal’s sons served in Vietnam.

He now has 22 grandchildren and one great-grandchild. Spending time with his family is an important part of his life, he says. He keeps a freezer full of meat for frequent visits; holidays are always celebrated at his house.

"Well, every time we get together, it is a holiday," he said. "I always like to cook out."