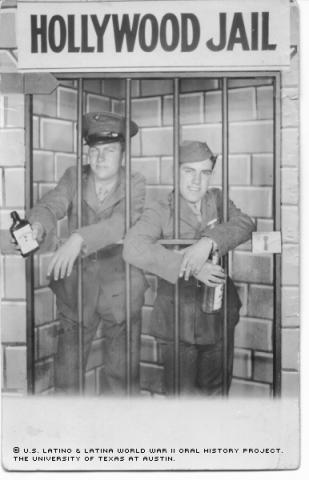 In June of 2002, 58 years after the battle in which he earned it, Oscar Torres finally received the Purple Heart for wounds received in action during the September 1944 assault on the island of Peleliu. In addition to earning that medal after being drafted in 1943, Torres, a Marine, witnessed a great deal of carnage on the tiny South Pacific Island.

Despite being drafted, Torres wasn’t reluctant to serve his country. He hadn't enlisted because his two older brothers had already done so; Torres simply stayed behind to help his family until he was called.

Torres was born in Laredo, Texas, on Oct. 12, 1925. His parents, Fernando and Aurora Torres, came to Laredo from Mexico in 1914. Laredo is the principal point of entry on the U.S.-Mexico border, about 150 miles southwest of San Antonio, Texas. Torres' father successfully ran a dairy for several years, but the Depression took its toll. Fernando died when Torres was only 10 years old.

After his father's death, Torres' mother used a loan to build a hotel, which provided income for the family, but Torres still worked at his uncle's store through much of high school; he was drafted in 1943, before he could graduate. Torres’ older brothers, Fernando and Hector, had already enlisted.

Torres opted for the Marines, and in February of 1944, left for six weeks of basic training in San Diego, Calif., then went on to Camp Pendleton in nearby Oceanside, where he received further training in machine guns, radio operations and amphibious tank driving.

Torres was in the 8th Amphibious Tractor Battalion of the 1st Marine Division. The men needed to be highly skilled in three areas so they’d be prepared to take over another man's station if he were killed. His division left California for New Zealand, Guadalcanal and other stations in the Pacific before being called into the operation on Peleliu. It was to be Torres' first campaign.

On Sept. 15, 1944, the 1st Marine Division and the Army's 81st Infantry Division began Operation Stalemate II, the invasion of the Palau Islands, Peleliu and Anguar. Under the command of Major General William H. Rupertus, the Marines encountered heavy resistance from the Japanese, who were entrenched in underground caves and concrete bunkers. Long-range flame-throwers, mounted on the amphibious tractors, proved more effective than aerial assaults against the Japanese defenses.

Although it took only seven days to control the southern portion of the island, the Marines suffered such heavy casualties that the Army's 81st Infantry Division was called in from Anguar to relieve them.

Torres recalls how his injury occurred when he and five other men were sent out in two amphibious tractors to look for wounded soldiers.

"But we didn't find any. They were already dead," he said.

It was Torres' job to look out for enemy fire, so when he heard a machine gun cock, he shouted, "Machine gun nest!"

The Marines hurled smoke grenades to cover their retreat, but in the exchange, two were killed and Torres and one other were wounded. Torres was hit in the thigh by machine gun fire from the Japanese.

All he remembers is passing out on the field and waking up in the field hospital about 24 hours later, after doctors had removed the 7-mm bullet. The other men in his unit had carried him back to the tractor and to safety.

During the campaign, the Navy prevented the Japanese from reinforcing their forces on the island, which allowed Marine and Army forces to eventually prevail. Ultimately, the victory isolated Japanese forces in the Philippines and denied them a key island in the South Pacific, although, that all came at the cost of thousands of American soldiers' lives.

After his injury, Torres was assigned light duty but remained with his division. While he didn't see combat again, he did see other horrors. After Peleliu his division went to Iwo Jima and then Okinawa. He recalls enemy fire, as well as the kamikaze aircraft, while they were at sea.

Torres arrived at Okinawa in April of 1945. His unit primarily hauled gasoline, rations ammunition and other supplies onshore in the amphibious tractors. The efforts were part of the preparation to invade mainland Japan in November of 1945, where he likely would have seen further combat. But in August of 1945, the atomic bombs dropped on Hiroshima and Nagasaki by the U.S. abruptly ended the war.

Torres seemed destined for Japan. He was reassigned to occupational duty in Japan and found himself in Nagasaki 30 days after the bomb had been dropped.

"It was worse than an earthquake. Flat land, as if somebody had just scraped all the buildings off," he said.

Torres served further occupational duty in China, and, in 1946, came back to San Diego, where he was discharged due to his injury. Torres took a train to San Antonio, and from there, a bus to Laredo, arriving home May 10, 1946, on Mother’s Day.

"My mother said it was the best present she ever got," he said.

After earning his high school diploma and starting college, Torres was called back to active duty in 1950 for the Korean War. Due to his injury, he worked as an office clerk back at Camp Pendleton. He only served for a year and returned to Laredo in 1951.

In 1952, he married Elsa Gomez and the couple had six children: three boys and three girls. The boys all graduated from Texas A&M and went on to own their own businesses.

Torres expressed no regrets about his war experience or injury.

"We all did a job that we were supposed to do," Torres said. "We were called. Our country was in danger. Somebody had to do the job. Who else but the young generation?"

Mr. Torres was interviewed in Laredo, Texas, on September 28, 2002, by Roel Virgilio.