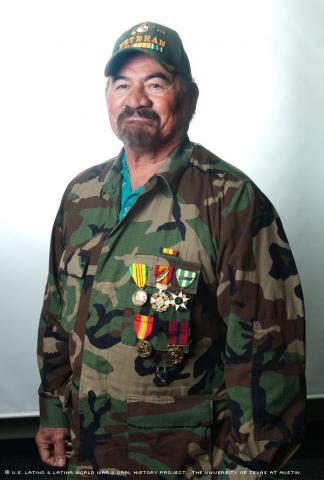 It's 3 a.m., and Oscar C. Muñoz wakes up to make sure his doors and windows are locked in his Chula Vista, Calif., home. It's been this way every day for more than 40 years.

Muñoz enlisted in the U.S. Marine Corps on April 15, 1968, without telling his parents. One of twelve children born to Manual and Abigail Muñoz, farm laborers in Arizona, he knew the military was his only way to access education and success.

"We used to pick cotton, and it was three cents a pound," Muñoz said. "Can you imagine how much cotton you have to pick to make one pound?"

During his almost one-year tour in Vietnam, Muñoz served in the 5th Marine Regiment of the 1st Marine Division as a lance corporal. He said he would often serve as point man and lead his company into the battlefield. Muñoz recalled a battle at Liberty Bridge on May 9, 1969, when he said his lieutenant showed him where to take his unit.

"That day crossing that river by myself, I knew. I said, 'My goodness, Arizona Territory, this is a bad place.’ ” he said.”Either they're going to kill me before I cross that river, or I'm going to make it to the other side, and I'm going to have to fight my way out of it."

Four hours into the jungle, Muñoz said he saw the light of his angel illuminating his destination.

While in Vietnam, Muñoz said he served with men of every color. On the battlefield, race didn't matter. He and other Latino troops would have fiestas with tamales and jalapenos sent from home.

Muñoz was discharged in February of 1970. His decorations included the National Defense Medal, the Marksmanship Badge, the Combat Action Badge, Vietnam Service Medal, and the Vietnamese Cross of Gallantry.

When he boarded his flight home, he thought he had seen his last dying Marine and would never again hear another man scream in agony.

He met Margie soon after he returned home, and in 1971 they married. They had four children: Gabe, Patty, Steven and Marie. They divorced in 1992.

Muñoz said the diagnosis of Post-Traumatic Stress Disorder didn't exist after the war. Nobody knew what it was, and nobody talked about it.

Muñoz said that he had left Chandler, Ariz., as an 18-year-old high school graduate and athlete, and he returned as a battle-scarred veteran who was afraid of the pitch-black dark.

"When I came back I went and bought a gun and a knife, and I would sleep with a gun in my drawer and a knife under my pillow," he said. "Can you imagine what my mom went through? She never even knew guns existed."

Muñoz said his second wife, Norma, heard him crying in his sleep, but during the day he didn't show any emotions. "I have become like a robot," he said.

He said he learned to build up a perimeter around his emotions, like the perimeter his unit patrolled during Vietnam. "When we were in Vietnam you would get close to your buddy, and if he would get killed, you would go through a lot."

Muñoz said he never turned to drugs or alcohol to cope with his disorder. Instead, he turned to Norma, who helps him maintain a positive attitude. He said they like to go dancing and tell jokes.

Muñoz met Norma in 1995 when he sold her a house. She was married then, and when she divorced, he helped her sell the house. “Then we started dating,” Muñoz wrote later, and they married in 2000. They had no children.

"You can never change life. It gives you what it gives you, and you have to make the best of it," he said. "I live with what it has dealt me, and I move on."

Muñoz receives treatment for his PTSD, and, he added later, “I have only good words for the care [the Veterans Administration] has given me since I came back. …”

Once, at a VFW post in Imperial Beach, Calif., Muñoz was turned away because he had forgotten his VFW card. He said one of the men, who he described as “rednecks” in the bar, could have sponsored him so he could come in and play pool. But they didn't. Later, Muñoz returned to that VFW post and played pool for three hours, beating everyone he played.

Muñoz's camouflage jacket with his combat ribbon and the medals his mother stitched onto it is a symbol of the pride he feels for having served his country. "It's my country, too," he said.

And what about that angel? “The Angel is still with me,” Muñoz wrote later. When he dreams of Vietnam, “it comes and takes me away.”