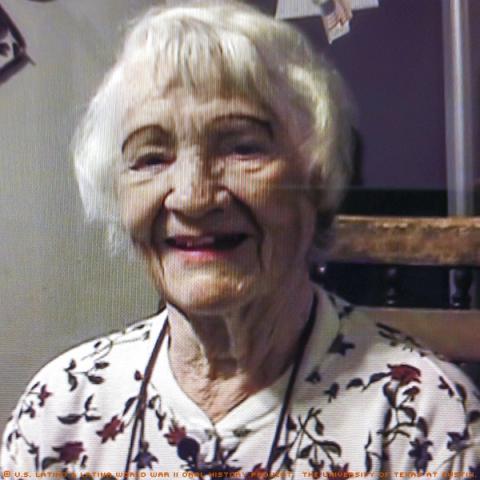 As the wife and sister of men who served in World War II, Ophelia Muñoz Rodriguez always encouraged everyone to support returning veterans, no matter what the circumstances.

Both Rodriguez and her husband worked hard to ensure that returning soldiers were well- cared for in in their community. She acknowledged that that there may be differences between past wars and current conflicts.

“It’s hard, it’s very different now-- but the soldiers do the same job,” she said.

“We are losing a lot of the veterans, and we need to tell people all the things that . . . were going on, because they’re going to forget [or] they’re not going to know that they left a lot of things back home to go help the country,” she said.

Rodriguez grew up as the daughter of a meat market owner, so the family never went hungry during the Great Depression. But they had other struggles.

Her oldest brother, Hector, who was a student at Edinburgh Junior College, was killed in an automobile accident. “We tried to hide our feelings,” Rodriguez said. “We really tried to take care of my mother.” Although devastated, her family sought comfort in their faith by attending the Methodist church regularly.

Although they were not a particularly rich family, Rodriguez and her siblings had the opportunity to go to college. She attended Edinburg Junior College in 1945 (now the University of Texas-Pan American) and San Marcos Southwestern Teaching College (now Texas State University) in 1947. Her sister helped her pay for the school expenses.

She said she became interested in teaching as a girl because her family used to have a big table in their backyard where neighborhood kids came to study.

“I took over teaching them, and so I kept on and did it for life!” Rodriguez said.

Rodriguez started to teach first through fourth grades in the border town of Mission, Texas, in 1949. She worked in Mission schools until she retired in 1979.

“When I started working, I got my first TV,” she said, adding that it was not very long before the first color television was introduced.

Rodriguez said that many changes occurred in South Texas. She taught for 30 years, but explained that “when [she] was teaching [she] didn’t have many of those [children] from Mexico.” According to The Greater Mission Chamber of Commerce, 97 percent of the current student population is Hispanic. More and more, immigrants from Mexico and other Latin American countries are more visible in border towns like Mission.

Rodriguez estimated that Mission has almost doubled in size from when she first started teaching.

Rodriguez met her husband, Eriberto Rodriguez, at a friend’s house after he had returned from serving for three years in World War II. They dated for about half a year, but in 1949 Eriberto went to work in California and was gone for close to two years. When he returned home to Texas, he brought with him an engagement ring. They were married in 1954, and had two children -- Chris Edward and Richard Lee.

Rodriguez’s brother, Tony Muñoz, served in the U.S. Air Force during World War II and was injured when his plane was shot down over Germany. She said he was troubled when he returned home to his parents’ house, where she also lived.

“He used to have nightmares [about it]. I could hear him… saying things,” she said.

Her younger brother, Johnny Muñoz, served later in Germany. Both brothers sent letters home during their service abroad, and their return home was cause for great celebration by their friends and family.

Rodriguez and her husband once visited Pearl Harbor, Hawaii, on a trip that was a bonus from his employer, American National Insurance Co. While there, she recalled how she felt when she heard about the attacks in 1941. “We were all scared,” she recalled.

“We went to Hawaii, and we saw the place where those ships had been bombed,” she said. “Even though you were not there [at the time of the attack], you feel how it was way back in ’41.”

She said she was proud of her husband and brothers’ service to the country and their involvement in veteran services after the war. “We always go to those meetings.” Her husband helped raise money for services for returning soldiers.

Ms. Ophelia Rodriguez was interviewed by Liliana Rodriguez in Mission, Texas on May 11, 2010.