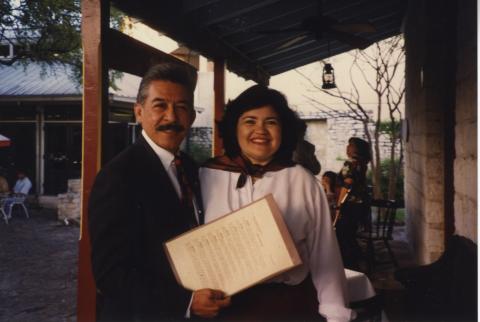 Born and raised in Brownsville Texas, Norma Cantú excelled in school despite coming from poverty. Thanks to her families emphasis on early education, Cantú skipped many grades, graduating college at the age of 19. After graduation she taught at the same overcrowded, underfunded high school she attended only a few years before. She soon went to Harvard law, returning to Texas after to work for the Attorney General’s office. After Cantú's time as a state law, she moved to San Antonio where she began work for MALDEF. It is here that she was thrown onto the case that set in motion the South Texas Border Initiative, LULAC v. Clements. Cantú talks about the events and court cases leading up to the filing of the case. After a long trial, the federal judge ruled the Texas system of distributing higher education funds, irrational and moved it to the supreme court. Before the case got there, the Texas Legislature took action, asking all of the border area institutions to come up with offers of what they needed. This resulted in the State allotting over 600,000 to fund higher education along the South Texas area. After telling the story of the South Texas Border Initiative, Cantú recounts some of her proudest achievements and comments on threats to Texas higher education today.