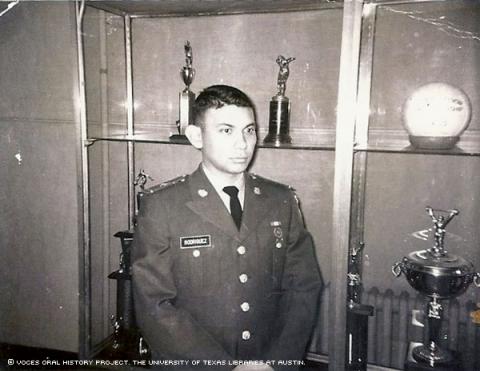 In the spring of 1968, Nestor Rodriguez was desperate to get out of his hometown of Corpus Christi, Texas.

Facing social pressure after a broken engagement, the usually straight-A student was failing his fourth semester at Del Mar Junior College when he decided to drop out.

"Life became unbearable in the neighborhood," Rodriguez said. "I decided, you know what, I need to leave."

So Rodriguez enlisted in the Army and asked to be sent to Vietnam at the height of the conflict. But high scores on aptitude tests, a detour at a West Point prep school, and an assignment to a nuclear missile site in Alaska kept him from ever reaching the battlefront, where more than 58,000 soldiers were killed.

Rodriguez had grown up in a "shack" in Corpus Christi, raised by a stay-at-home mother and a father who worked as a custodian at Del Mar Junior College. He developed an interest in science at an early age. His father brought discarded science and math textbooks home from Del Mar and Rodriguez studied them endlessly.

His interest flourished at school, where he excelled in the subjects. He studied every day in the library after school hours to avoid being caught in gang violence on the way home after classes ended for the day.

Math and science kept Rodriguez afloat in school, easily making up for the poor grades he made in English because Spanish was his first language.

"I was a very good math and science student, so that's how I got A's," Rodriguez said. "I was a poor English student."

Rodriguez graduated from high school in 1966 and enrolled at Del Mar Junior College, where his father had gotten the textbooks. He excelled for his first year and a half, but then the neighborhood drama started.

Rodriguez had been engaged to a girl in his neighborhood, but after the relationship ended, the neighborhood quickly took sides and things got tense.

"The neighborhood had become mobilized around the wedding," Rodriguez said. "People took sides, like, 'He should have married her,' or, 'No he shouldn't have.'"

"Life in the neighborhood became very uncomfortable for me," he recalled.

In high school, Rodriguez had always watched the Greyhound buses drive by during his P.E. period at noon and fantasized about escaping Corpus Christi on one of them.

"I always envisioned it was going to somewhere exciting in the world, and I always wanted to be on it. I felt like I needed to get out of Corpus. I needed to see the world," Rodriguez said. Now he couldn't wait any longer.

A friend of Rodriguez's who was in the National Guard began talking to Rodriguez about joining the Army. It was the spring of 1968 and the Vietnam War was raging; the violent Tet Offensive was in the news. And other kids in the neighborhood were getting drafted.

"I wasn't worried because I was coming from a different perspective," Rodriguez said. "My friends were going over there, and I knew I couldn't face them if they had gone to Vietnam and later I didn't go. I had to be there too."

On the last Tuesday in April, Rodriguez told the recruiter he wanted to be in the airborne infantry. He wanted to fight in Vietnam. The recruiter told him he would ship out from San Antonio, so he drove home, left his car and got a bus ticket for San Antonio. He left without telling his parents and wouldn't talk to them again for months.

From San Antonio, Rodriguez was sent to Fort Bliss in El Paso, Texas, for basic training.

"Within hours I knew I had made a huge mistake," Rodriguez said.

The drill sergeants were tough; they were preparing the fresh servicemen for war.

"I was terrified. Maybe I cried. I was scared. But slowly we kind of bonded in basic training," Rodriguez said.

In basic training, Rodriguez began to fear being sent to Vietnam. But he scored very well on his aptitude tests and another option presented itself. Rodriguez was offered a spot at West Point prep school in Washington D.C.

"So I said, 'I need to kill a year because I'm probably going to do a year in 'Nam.' And I said, 'Washington D.C. doesn't sound half bad,'" Rodriguez said.

He did well at the prep school and was later offered an appointment to West Point. The appointment was big news in Corpus Christi.

"While I ran away from home through the back door or whatever, I redeemed myself when I got an appointment to West Point," Rodriguez said.

So instead, Rodriguez trained as a combat engineer in Missouri, where he headed a platoon that he said was one of the best. In Missouri, Vietnam was still looming. He knew he would likely be shipped out soon. But Rodriguez was saved by another assignment, one he had asked for when he first enlisted: airborne training in Georgia.

After airborne training, Rodriguez was prepared, once again, to go to Vietnam. On the day the troops got their overseas assignments, Rodriguez was scared to death. And he was saved once again. His new assignment: a nuclear missile site in the mountains outside of Fairbanks, Alaska.

In Alaska, Rodriguez's math and science skills came into use. The missile site was part of the line of defense against potential Soviet attacks. Rodriguez was put in charge of maintaining the missiles that would be used against invading Russian bombers.

Rodriguez was in Alaska for 18 months, until the government shut down the missile site. By that point, his tour was complete and he was never sent to Vietnam.

On returning to Corpus Christi, and to civilian life, Rodriguez was curious about whether he still had it in him to earn a higher education degree, to get good grades.

After re-enrolling at Del Mar Junior College in 1971, he soon found himself excelling as a student.

"From that summer of '71, all the way through the Ph.D. program, I made straight A's!" Rodriguez recalled.

As he moved through his undergraduate education, Rodriguez's interest for math and hard sciences met the competition of a newfound involvement in contemporary political and social issues.

During those years, he became involved with the Chicano movement, at one point joining the Nueces County office of La Raza Unida Party. His involvement in activism triggered an interest in political mobilization and other facets of human behavior.

Rodriguez eventually transferred from Del Mar College to Texas A&I University (in nearby Kingsville, Texas) to finish his four-year undergraduate education. He switched his major from physics to political science, and ended up graduating in 1973 with dual degrees in political science and sociology. After an additional year of coursework, in 1974 he also earned a master's in sociology from Texas A&I.

Upon graduating, Rodriguez immediately found a job as a manpower planner with the City of Corpus Christi, but felt dissatisfied with performing clerical duties for the local government.

It was then that he received a very timely phone call. A former Texas A&I professor invited Rodriguez back to Kingsville to teach sociology at his alma mater. His new job, which lasted for another year and a half, led to a career in academics.

"It was a call that changed my life," Rodriguez said, laughing.

Rodriguez left Kingsville in 1976 to pursue a doctorate in sociology at the University of Texas at Austin. He specialized in migration research, a subfield that, according to him, was not as popular back then as it is now.

By the time Rodriguez completed his doctorate in 1984, he was teaching at the University of Houston's Department of Sociology. During his 26 years at Houston, Rodriguez obtained tenure, became a full professor, chaired his department and opened a Center for Immigration Research.

He moved once more in 2008, when he became a professor at the University of Texas at Austin, where he is currently a faculty member for the departments of Sociology and Mexican-American and Latina/o Studies.

Mr. Rodriguez was interviewed by Ben Wermund in Austin, Texas, on April 29, 2011.