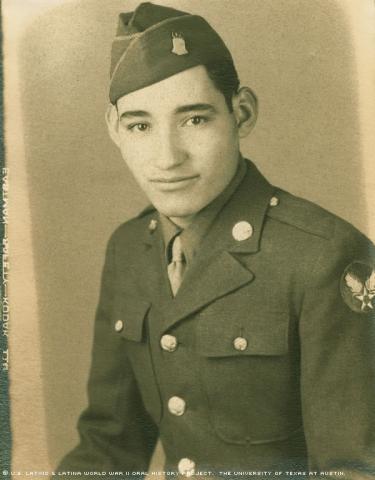 Interviewed By:
Luis A. Saenz

As his B-24 bomber turned to begin its bombing run, radio operator Nemesio Mena would carefully stand on the catwalk over the bomb bay and take pictures of the damage below.

After the bomb run, he would have to make sure no bombs were hanging in the bomb bay. If one of the highly explosive bombs was still in the plane, he would have to “trick” it into dropping by kicking it, as a B-24 can’t land with a bomb hanging from its bomb bay.

Mena and his crewmates aboard the B-24, named Irishman’s Shanty, were part of the legendary 492nd Bomb Group. The 492nd was part of the England-based Mighty 8th Air Force, which bombed the German war machine during the day from the summer of 1942 until the end of the war.

The 492nd was one of the last heavy bombardment groups assembled and deployed to England, according to www.492ndbombgroup.com, a Web site created in its honor. The crews had “more experienced men within their ranks than any other group serving in the European Theater. They had more flying hours going into the war than most would have at war's end. Some of them were the instructors that had trained many of the airmen during the arms buildup; others were veterans of anti-submarine patrols that had been defending America's coast.

“As America's buildup was nearing its completion, these men were allowed to put in for combat duty.” They flew 67 missions in only 89 days – from May to August 1944, suffering more casualties and losses “than any other group,” according to the Web site.

The 492nd “became the first and only group in American history to be disbanded due to high casualties,” according to the site:

“Tough Luck, Hard Luck, Bad Luck, Ill-Fated and Jinxed are among the many phrases used to describe this group's fate during its 89 days of combat service in World War II. At the time, there was no official nickname for the 492nd Bomb Group. General Doolittle and his staff dubbed them the Hard Luck Group. Many years after the war, the 492nd Association adopted the name The Happy Warriors, the old unofficial nickname for the 859th Bomb Squadron.

“There was nothing the group did or didn't do to deserve their hard luck. They merely found themselves caught by the Luftwaffe without fighter protection on a few very costly missions. Never once, though, did the group fall apart to become easy prey. They turned each potential massacre into a slug-fest, proving that they could dish it out as well as take it.”

“We were the first crew of the group to finish the European Theater,” he said.

Initially, his crew and the other air crews were only required to fly 25 missions; “it was a setback,” when they were informed of five additional missions, said Mena, as the casualties among Eighth Air Force crews were so high that the odds were against members completing even 13 missions.

“We flew day in and day out,” he recalled.

Before joining the Armed Forces, Mena’s oldest brother Kallalo, a WWII draftee, told him to “enlist for what you want.” So Mena enlisted in the Army Air Corps in 1942 at the age of 19. He then attended radio operator school for six months.

After completing their 30 missions, he and his crew were given leave to go to Scotland. And after the war, he returned to his hometown of El Paso and finished school.

He again served in the Air Force during the Korean and Vietnam wars. During Vietnam, Mena was in an airborne command post operating electronic counter missions.

While serving in the Air Force, he completed his training in a TAC NCO (Tactical Noncommissioned Officer) Academy course in February of 1966. He also completed TAC SEA, survival-school training, and Tactical Air Command parasail training in December of 1967. On August 1, 1968, he retired from the U.S. Air Force at age 45 at the rank of Master Sergeant.

Some of the awards Mena earned during WWII include a Distinguished Flying Cross, an Air Medal (with three oak leaf clusters), Armed Forces Expeditionary Medal and American Campaign Medal.

According to Mena’s son Alejandro, after retiring, Mena earned a teaching degree from El Paso Community College and taught electronics. At the time of his interview, Mena was 83 years old, lived in El Paso with his family, including his longtime wife, Domitila Jaramillo Mena, and still enjoyed telling people about his wartime experiences, thereby, keeping alive the memory of the 492nd’s contributions.