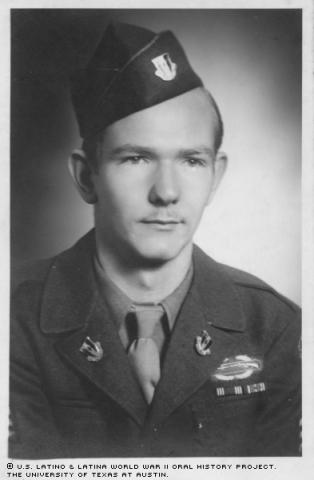 Alabama native Nathan Edgar Bossom had never set foot outside of the South before he was drafted into World War II at the age of 20.

Although he’s Anglo, Bossom notes there was camaraderie among the troops of his unit in spite of their different backgrounds. He says he especially remembers Hector Barrera, a fellow soldier with whom he became good friends.

Bossom has always cultivated an appreciation for Latino culture, a penchant he acquired from his father, whose work in the construction industry took him throughout Mexico and Central America. Fluent in Spanish, Bossom married a Mexican American woman, Mary Ramirez, with whom he's been wed for 47 years.

Mary Bossom sat next to him throughout the entire interview. The two leaned into each other, playfully joking about their age difference of eight years. He then began discussing the "gruesome" time of war during his youth, while she sat back and listened to a story of a time she’s too young to remember.

"I was only in middle school during the war," Mary said. "The only thing that I was concerned with were my dolls."

Bossom, however, was facing the biggest change of his life a mere two weeks after his high school graduation. He concedes he was frightened of leaving the only place he ever knew, but was grateful of the chance to serve his country.

Immediately after being drafted, he was sent to Colorado for training. After 18 grueling weeks of intense preparation, he was shipped off to Europe to begin fighting in the war. He landed in Scotland, then made his way to Ireland and England and finally landed in France, where he was issued his first gun and sent straight into battle.

It was winter, and Europe was under some of the coldest weather it had seen. The troops traveled by railroad cars used by livestock but outfitted for humans, the cars still filled with the stench of cattle and horses. Bossom rode all the way across France to Belgium, where the doors of the freight cars burst open to a war. Within two weeks, he reached the front lines as a replacement for one of the hundred who’d died in battle before he was enlisted.

Bossom spoke of many horrific sights he witnessed, but none would prepare him for the bloody Battle of the Bulge.

"I remember it was the coldest day in recorded history for Germany," he said. "For 75 days, it never got warmer than 15 below zero."

All around, the desolate dreariness of winter and war sank their spirits further. The troops trudged through waist-high snow and by day's end packed the snow into makeshift beds, hoping to get some rest before the next march. It was during this time that his feet froze, his poorly insulated boots unable to protect from the elements. His feet have never managed to fully recuperate, he says, still giving him problems every now and then. But it’s the mental anguish of those dark days that has really stuck with him, more than the physical scars he carries.

During the interview, Mary noted that after the war, her husband would, at times, suddenly sit up, wide-eyed, in bed in the middle of the night as if the war still haunted him.

Bossom recalled: "During the Battle of the Bulge, any time you closed your eyes, you had a good chance of getting killed, so you never went to sleep unless there was another soldier with you and one was able to stay on guard while the other slept."

To this day, albeit with less frequency than before, he says he wakes with the memories of those days of battle.

The harsh climate during the Battle of Bulge was only the beginning of the hardships he’d face. Ammunition ran low, along with food and fuel for their aircraft. The Germans had the edge, but the American troops were unsure why they were at such a disadvantage.

They eventually learned why from letters they received from home: Labor unions had gone on strike for a raise in pay, refusing to work until their demands were met. To this day, Bossom says he’s angry at what he views as misplaced priorities by the unions.

More than half-a-century later, his anger at the striking workers hasn’t waned. In fact, he said he ". . . would run over them and back up and run over them again," glaring at the camera for added emphasis: "Did you get that?"

Even now, he’s enraged by what he views as a betrayal, because it was "[O]ur own local citizens that hurt us the most when we were in the war," he said, noting his monthly combat duty pay was only $29 at the time the union was demanding a raise.

Mary notes that others were aiding the war effort with no demands for added compensation in her community of Brownsville, Texas. She says she especially remembers the women of her neighborhood, who had husbands in the war, leaving in their coveralls for the airport that housed the Military Aircraft Rebuilding Plant. Broken down engines were sent there to be fixed and then sent back to the front lines to fortify their efforts to win the war. It was the aid of civilians like those and the American soldiers out on the battlefield that helped bring the war to a victorious conclusion.

By the time the war was over, Bossom had ascended to the rank of Sergeant First Class. Returning to Harlingen, Texas, he found a job working at a wholesale newspaper company; however, three years later, he was called back into service during the Korean War. He says WWII affected him more than the later war because he was so young, and it was the first time he’d seen the devastation of combat first hand. However, he says he feels lucky he was never shot and didn't think he’d be as lucky the second time around.

For one fortunate enough to have eluded death on the battlefield, his new assignment had him surrounded by those who weren’t so lucky. Working in the Graves Registration Unit recovering bodies, he recalls having to identify and ship corpses home to their families. After a year, he was sent home again, intent, he says, on spending the rest of his life away from the death and destruction of war.

Bossom and Mary married when he returned from Korea. They met after the war, after Bossom's first marriage ended in divorce. The couple had three children: Alan, James and Brenda. Bossom had two children, Terry and Carole, from a previous marriage.

The Brownsville couple remains active, particularly with a senior citizens group, of which Mary is the president. She boasts the group now has 1,500 members. Bossom stays busy with his involvement in the Boy Scouts, an organization he has been active in for the past 65 years. He became a Boy Scout when he was 12 years old, then got older and became a leader in his own sons' troops, now teaching other fathers to become troop leaders.

At 76, he’s starting to mull the idea of retirement; however, he vows to stay active until he’s no longer able to.

Mr. and Mrs. Bossom were interviewed in McAllen, Texas, on April 6, 2002, by Yudith Vargas.