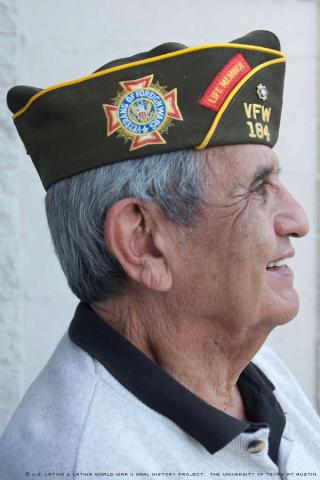 He may have been only 16 at the time, but Moses Diaz decided to enlist in the U.S. Navy because, as he recalled: “I didn’t want to miss out on the war.”

It was 1945, near the end of the World War II, and Diaz completed his basic training in San Diego.

It was his first time away from home and he often wrote letters home to see which of his family and friends had enlisted. His mother, Martina Diaz, had five sons serving in the military during World War II.

After San Diego, Diaz was assigned to work as an interpreter in the Panama Canal Zone, which was then controlled by the United States. He worked out of the 7452nd General Hospital at Fort Clayton in the Canal Zone.

“I got to visit a lot of Central and South American countries as an interpreter,” Diaz said.

After the end of World War II, Diaz joined the U.S. Army for two years because he said he wanted to get an education and had not earned enough points to go to school on the G.I. Bill. After his discharge from the Army, he returned to Phoenix, Ariz., where he worked at the Veterans Hospital. He also joined the U.S. Naval Reserve.

When the Korean War broke out in 1950, Diaz was still in the reserves, so he volunteered for active duty. He was sent overseas by ship. He was stationed aboard the light cruiser USS Juneau CL 119, and he said that he never left the ship during in the war.

There were many Latinos on his ship, as well as a lot of non-Hispanic white men. When asked whether there was racial tension, he said there was none because so many of the men on board “looked like me.” Diaz said there were no African Americans on his ship.

He added that it was obvious to him that many of the white men, who were from the East Coast, had never seen a Latino; several asked him if he was Italian.

Some of the men who asked if he was Italian came from Maine and later became his friends.

Diaz said that his grandson found records of the ship he was on, and that ship was the first ship to fire in the Korean War. The crew fired night and day trying to hit trucks on land that were delivering supplies. They also tried to create landslides by shooting at hills, mountains and bridges so supplies could not get to their destinations.

He recalled that one night while talking with a friend, the guns fired at the enemy. The men were not wearing earmuffs and Diaz suffered from hearing loss later in his life, although he never applied for disability.

One of the men on the ship became his best friend, but they lost track of each other after the war. It wasn’t until 47 years later that the two made contact with each other. At the time of his interview, the two were still friends. He learned that one of his friends had ended up living just five miles away from him.

Diaz said he regretted not getting a better job after the war. He used part of his G.I. bill to pay for a printing trade school, but he said that he hadn’t really taken advantage of the education that he had obtained. He also used some of his G.I. Bill money to buy a house, he recalled.

At the time of his interview, Diaz lived in Riverside, Calif., with his wife. They married in 1950, just before he was shipped to Korea. His ship had come into Long Beach for a short time, and he decided to get married before he had to leave again.

Diaz and his wife had three sons; two joined the Air Force. He said he taught his grandchildren to be proud of their country. Diaz described himself as very patriotic.

“My grandkids salute during the “Pledge of Allegiance,” not hand over heart. I taught them that,” Diaz said with a proud smile.