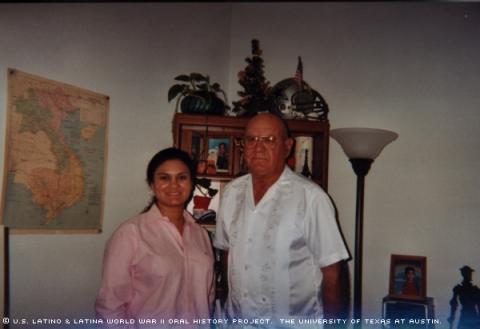 Moises Garza enjoyed the simple farm life of La Joya, Texas. Born Sept. 4, 1924, he grew up by a river and enjoyed fishing and hunting deer and ducks. Garza remembers huge family gatherings where they cooked food outside. Garza's parents, Jose and Josefina Garza, worked in nearby farms.

Garza said he enjoyed school and the girls who chased him. Mexican children from Mission and McAllen attended La Joya schools because of the discrimination they faced in their own towns. But Garza said he had good relations with the white students, who helped him practice his English. Outside of school, Garza worked on farms by pulling weeds and performing other lawn work. His pay varied from a quarter to $1.

"It was a big deal to come to Mission," Garza said. "Mission was a big town from La Joya. And you come to the drug store and ask for cherry coke and go to a movie. That was great, you know, as poor people. That money, sometimes I saved it. On the weekends I would become a big spender and spend two dollars!"

Garza's older brother, Abundio Garza, joined the armed forces May 11, 1943, while Garza was in high school. While he was stationed with the 1st Engineer Combat Battalion, Abundio Garza constructed bridges for tanks to travel over. One day a bomb hit a bridge his unit was building, and the blast knocked him out. His fellow soldiers left him for dead, but Abundio Garza regained consciousness and followed them. Three days later, he reached the battlefront, and everyone thought they were seeing a ghost. Unfortunately, Garza said, his brother never received any recognition for his experience and lost a considerable amount of his hearing. Abundio Garza died in 2002.

On June 14, 1943, at the age of 18, Garza also traded the simple farm life for the Army. He volunteered without telling his parents, but when they heard the news, they supported his decision.
First, Garza traveled to Fort Sam Houston, then to San Antonio and then Fort Sill, Okla. He trained with field artillery before continuing onto Fort Leonard Wood, Mo. Next, Garza remembers sailing by the Statue of Liberty in New York City before going overseas to Glasgow, Scotland, and then England.

For the next 2 1/2 years, Pvt. Garza survived various battles. His first mission included backing up infantry already in Normandy, France, at the end of August 1944. Pvt. Garza continued to fight through the Netherlands and Belgium. The American forces continued to push the Germans from the border of France and into Holland. When they finally reached Germany, Pvt. Garza stood in the stadium where Adolf Hitler used to deliver speeches.

While liberating France, Pvt. Garza fought in the Battle of the Bulge. While covering a foxhole, he broke his wrist, and another soldier helped him tend his wounds. Pvt. Garza traveled to a hospital in Southampton, England, in February 1945.  While in the hospital, Pvt. Garza found out that one of his cousins had been killed by German troops. He wanted to avenge his cousin's death by returning to the battlefront, but it was obvious Germany was losing the war; his services were not needed.

Garza was awarded the Purple Heart Medal, the Good Conduct Medal and the EAME Campaign Medal with three bronze campaign stars. While he was in the Army, Garza said he witnessed discrimination. In Oklahoma, he said, many soldiers would not salute a black lieutenant.

"They would not salute the person, but were supposed to salute the uniform," Garza said. "We saw a lot of segregation. When we were sailing from New York to Scotland, some guy from Louisiana would not talk to us (Mexican Americans)."

While in France, the same soldier did speak with Garza, and saw firsthand how successful he was with the ladies. Garza wangled a dance with a beautiful schoolteacher, but when he tried to speak French to the woman, he was unsuccessful. At the end of the night, she admitted she understood Spanish, as well as six other languages. Back in the United States after the war, Garza remembers reading posted signs that banned minorities from using buses, public bathrooms and swimming pools.

"They did not have any appreciation for what we did," Garza said.

Garza's family respected him as a hero, but he wanted to forget about his experiences and did not to talk about the war. Garza finished high school and received his diploma six months after he returned. He worked in various jobs, such as at the La Hoya School District's tax office and at department stores in the receiving department. After a while, he said he missed traveling, and left for Michigan to pick cherries. Later he worked as a welder in a factory in Illinois.

Eventually, Garza returned to the Rio Grande Valley and worked with the Department of Agriculture, traveling to Mexico and teaching farmers to look for fruit who can damage crops. After he came back in Texas, Garza met Emma Guerra while she worked at a dime store. The two married in McAllen on Sept. 20, 1951. They raised ten children, and Garza supported his family while working as a postal worker.

After 15 years, the Garza family moved to Redwood City, Calif., because of the cooler weather. Garza worked for a while at the National Seal Company and then returned to the post office. He worked for 33 years with the Postal Service, retiring in 1984 and returning to a simpler life in McAllen.

"I missed the farm life. It was a rat race in California," said Mr. Garza. Now, he takes care of his goats and chickens.

Last year, Garza nonchalantly mentioned to his grandson, who had joined the Army, that he had been in the Battle of the Bulge.

"Now everybody knows," he said. "They make copies of my discharge and the telegram sent to my mother about my wounds. Now they know what happened to me."

Garza's honorable discharge documents do not mention that he was wounded. His family encouraged him to get the papers corrected and today,Garza is a member of the Disabled American Veterans Raul Lopez Chapter 95 in McAllen, the Veterans of Foreign Wars Post 3895 in La Hoya, and the Catholic War Veterans Post 1065 in Mission.