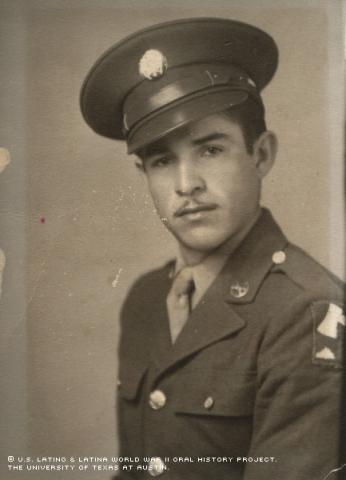 During a brief trip home from the war in Japan, Moises Flores surprised a whole colony in Mexico that thought he’d been killed in combat.

Among those shocked by Flores' return was the sheriff in Chihuahua, Mexico’s Colonia Dublan, the town in which Flores was raised. Although he’d been born 200 miles across the border in Los Angeles, Flores was well known in the town where he spent his formative years. The lawman had heard of Flores' heroics abroad, and wanted to discover just how brave he really was.

"He pulls out his gun and cocks it and puts it at my forehead," said Flores, pointing his index finger like a firearm to his temple. "And I said to him, 'I hope you don't pull that trigger, 'cause I'll be gone.' But I didn't show him any fear at all. So he puts it back in his holster and says, 'No, you're pretty [brave].' I slapped the hell out of him," Flores said. "But we still kept drinking. We got drunk."

In fact, for Flores, a 77-year-old war veteran and retired plumber, bravery was instinctive.

Flores was 9 years old when his mother died. Knowing her death was imminent, she left Flores' brother and sister with her well-off parents in Colonia Dublan, but insisted Flores stay with his father. As a result, he’d live in poverty with his father, new stepmother and relatives in Chihuahua for the next eight years, laboring on his grandparents’ farm.

"My father neglected me," said Flores, scratching his neat, gray beard and mustache. "I had it rough." After four years of attending the "English school" his mother had chosen for him, his father sent him to a "Spanish school" for six more years.

When he was 17, he left home -- ostensibly to visit his mother's family in El Paso, Texas, although his true intention was to settle there. Once there, he immediately volunteered for the military. Rejected because of his young age, he waited to be drafted.

Flores was inducted into the Army on July 20, 1943, at Fort Bliss, Texas. After training in Oregon, California and Hawaii, he traveled by troop ship to the Pacific Theater with the 81st Infantry Division.

Like most men on the boat, Flores didn’t know in advance where they were going; they didn’t see land for 43 days.

"My goodness I was anxious to get off that boat, but then again, we didn't want to get off because we were going into combat," said Flores with an uneasy laugh.

Flores' war experiences left him with stories he tells so vividly it’s as if they just occurred. As he remembers the war, the creases in his forehead deepen and his eyes narrow behind his glasses. Wearing a black baseball cap, he imitates voices of people from his past as he tells his tales in an animated manner.

One time, his division captured a Japanese officer and Flores' sergeant wanted to shoot him on the spot.

"I didn't let him kill him. I told [him], 'The minute you squeeze that 45 [caliber gun], I'm gonna squeeze the bottom of this radio. I'm gonna snitch you off,'" Flores recalled. "He didn't do it."

Flores also remembers encountering several Japanese men who lived in the same Mexican colony where he’d grown up, hundreds of miles from the United States’ border. He never thought twice of the grocery store one of them owned or of the mysterious meetings held in a back room with a radio. It hadn't seemed unusual that they’d left Mexico a few years after the war started, but he later learned from a friend, who supposedly saw one of the men in Japan years after the conflict, that they’d been spies.

Life in the Army made Flores feel truly American. Although he was only 18, and younger than most soldiers with whom he trained and fought, he found ways to fit in. He never drank alcohol before the war because his family had always been deeply religious, but in the Army, Flores' ideas changed.

"I drank some socially, but I was always around people so I was socializing all the time," he said. "Even though it was against my religion … Well, I didn't care about religions. I didn't follow the doctrines at all."

Among the soldiers, Flores was a prankster. During an entertainment assembly of 3,000 people on a secure island, he yelled out "fire in the hole!" the warning for an impending explosion. He did so just to clear the crowd so he could meet a dancer he thought was attractive, he recalls.

"I called myself during those instances a morale builder," Flores said. "[They] would say, 'Ah, there's that crazy guy.' They would laugh. Laughter is the best medicine there is. So they liked me."

On Anguar Island in Palau, Flores was wounded in the back and spent four months in the hospital. When he returned to his company, he was reinstated to his position as the runner, or messenger, for his company of 200 soldiers. He eventually rose to the rank of Private First Class.

When his service was up, Flores re-enlisted for another year, this time with plans to be airborne. He knew he didn’t have enough education to be a pilot, so he volunteered for the Army Airborne forces, a parachute/glider infantry regiment. But his hopes for flight were short-lived.

"They dropped me out [and] I had to walk again. More walking than anything else," Flores said.

After eight months, his sergeant was transferred out, but not before promoting Flores, one of only three soldiers there with combat experience, to acting Platoon Sergeant. The promotion couldn’t be official, however, because of the "biggest mistake in [his] life," which Flores said he made when he first enlisted: Counting only his time at the "English school," he reported having only four years of education. As a result, the Army mistakenly thought he only had a fourth-grade education.

Despite this setback, the captain offered to make Flores’ promotion permanent if he agreed to enlist for six additional months. With barely four months left of active duty, Flores turned down the offer, and in November of 1946, his military service was over.

Flores married in 1948, and he and his wife, Alicia Paez Flores, eventually had five children: Frances, Moises Jr., Antonio, Oscar and David. All of their children graduated from high school and three have college degrees.

"I am very proud to be American. Sometimes I even call myself gringo, which I'm not. I'm still Mexican," said Flores, pausing to take his asthma inhaler. "But I'm an American first."