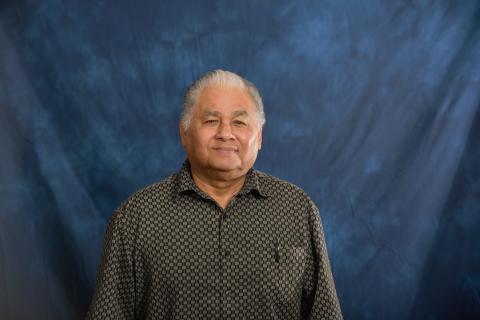 Modesto Arriaga was playing baseball with his church team, the Rosenberg Lions, when a police car pulled up and asked for one of his teammates to go with them. Later, the other boys would learn that the ballplayer’s older brother had drowned in the Brazos River, where he had been swimming.

“So the Father of the church asked me, ‘Why are the kids drowning in the river?’ And I told him, 'Because they didn’t let us into the swimming pool,'” Arriaga said. “He said, ‘You know what? Tomorrow, we’re going to see why they don’t let you in.’”

On Monday Father Jack Broussard, priest at Our Lady of Guadalupe Church, took Arriaga and another boy to the pool. The priest wanted to witness firsthand whether Mexican Americans were turned away at the swimming pool. He stood nearby.

“I was nervous. I knew I couldn’t get in,” Arriaga said. “He gave me a coin and said, ‘I’m gonna pay for you so you can get in.’ When I gave the white woman her coin, she said, ‘You can’t come in because you’re Mexican, and we don’t allow Mexicans.’ So the Father said, ‘That’s all I wanted.’”

On Tuesday, Broussard and six community members, including Arriaga’s father, went to the City Council meeting. “They didn’t talk, but they were there to support,” Arriaga said of the six Mexican- American men.

Arriaga, who was about 15 years old at the time, waited outside of the meeting to hear the outcome. “When Father (Broussard) spoke, they (City Council) didn’t even hesitate. They just passed the law that let Mexicans swim in that pool.”

Arriaga was born Feb. 24, 1941, in Rosenberg, Texas, to Pedro and Estefana Guerrero Arriaga. He was the third of seven children.

The elder Arriaga had a steady job in construction, building roads for the state highway department. While he believed in the value of education, his strenuous work schedule prevented him from getting involved in his children’s schooling.

Arriaga's mother, on the other hand, didn’t push her children to become educated. Modesto Arriaga stopped going to school, but his father was unaware his son had dropped out until much later.

“I thought I knew everything,” Arriaga said of his reasons for dropping out. “After eighth grade, I dropped out because I thought everything was so easy. It was so easy to me because I lived with my parents until I was 21, so I didn’t have no problems.

“Then I got married and started realizing I needed a job. And then when I tried to get a good job, I couldn’t because I didn’t have no education,” he said. “So that’s why I keep telling everybody to get an education. At least try it. Finish high school at least.”

Prospects for a teenage Mexican-American dropout were limited. Arriaga was sacking groceries at a store when he met his wife, Felicita Munguia; she was a frequent customer there. The two got married on April 17, 1962, and went on to have six children.

“When I got married, (my father) told me, ‘Son, this is the reason you should have went to school, because now you could have gotten a good job,’” Arriaga said. “I tried to get a good job, but I couldn’t.”

Through connections, Arriaga was finally able to get a job as a plumber’s helper. He started earning $1.25 an hour but found that even when he became more skilled, the pay did not rise.

“My father always told me if you do your job, then you don’t have to ask for a raise; they’ll do it for you,” he said. “But I couldn’t wait. I had six kids and had to ask for a raise. But he didn’t want to give me one.”

The owner told him, “You’re not doing nothing; you’re just helping.” He applied for a job as a plumber’s helper working at apartments but was turned down.

“They said, ‘No, you’re a Mexican.’ Everything was Anglo. ‘We don’t hire Mexicans,’” he recalled.

Arriaga found a new plumbing job with a boss who loved him like a son. But even though Arriaga was treated well, the owner, Fernando Cruz, offered no health insurance. When Arriaga's older son had a bicycle accident, the lack of health insurance proved a hardship.

Even though it meant leaving a good boss, Arriaga had to do what was best for his family. He took a job as a supervisor in apartment maintenance, supervising 16 men. The plumbers there were also Mexican Americans; when Arriaga saw them making basic mistakes, he tried to help correct them but was often ignored.

“I would tell them and they said, ‘Oh well, I don’t care.’ But if a white counterpart would tell them they’d say ‘Oh sir, thank you, thank you!’” he said. “I had 16 people, but I guess they didn’t want to trust me and listen to me. So the supervisor came and told them, ‘You know what? I made Modesto the supervisor for a reason. If you’re not going to follow him, then get out of here.’”

Arriaga knew he could command higher pay as a licensed plumber, so he drove to Austin to take the training and become licensed.

"I started looking back at my life when I was young and I said, ‘Yeah, they did it to me too,’” he said.

He started thinking about being told he couldn’t play in Little League because it was white-only, and how the parish priest had to start a baseball team to give the boys an outlet. He thought about his friend's older brother drowning in the Brazos because Mexican Americans and African Americans weren’t allowed in the Rosenberg swimming pool. He recalled the lady at the grocery store who wouldn’t let him bag her groceries because she wanted a white boy to do it; a sympathetic Anglo cashier let the groceries sit for uncomfortable minutes until the woman finally relented and let the Mexican boys bag her food.

“The cashier gave me a smile,” he recalled. “She didn’t have to say anything. We knew.”

By the 1960s, those many everyday indignities could not be ignored: African Americans and Mexican Americans were pushing back. Arriaga's wife, Felicita, became one of the most active in Rosenberg politics, along with Dora Olivo, later a state representative, and Lupe Uresti, later a City Council member and mayor. Felicita also ran for City Council.

“They stood for trying to better the community, like trying to get the people to vote and in City Council, so we can have a voice in there,” Arriaga said of the three women.

Arriaga “worked the streets” for all three women, going door to door and persuading Mexicans to vote and let their voice be heard. He learned from Olivo to speak up.

“She told me, ‘When you talk to the people, you tell them what you need and what I stand for,’” he said. “If they need a ride, you tell them, ‘I’ll come and get you.’”

On Election Day, he said, the Anglo turnout was high.

“They didn’t want any Mexicans to get in the City Council,” Arriaga said.

Arriaga played another important role in his wife’s campaign, serving as caregiver for their six children while his wife attended late meetings.

Asked if he cooked for his children, he laughed. No, there were many sandwich dinners at the Arriaga home when he was in charge.

Arriaga would sometimes overhear whites talking badly about the Mexican candidates. He said it was hard for him to keep his mouth shut when he heard racist comments, but he didn’t want to jeopardize his plumbing business, so he said nothing.

That, too, changed with time. If there was one thing he learned from his childhood experiences with discrimination and trying to survive in a “white-only” world, it was to speak up.

“I started saying what I thought,” he said.

Mr. Arriaga was interviewed by Maggie Rivas-Rodriguez in Richmond, Texas, on March 23, 2014.