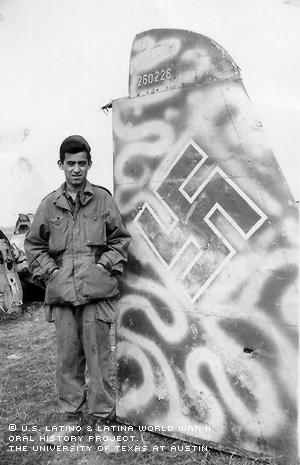 At 80, Mike Silva reflects on his World War II service and how he was foolish to volunteer for a conflict that still moves him to tears decades later.

Silva was wounded during the war and saw many fellow soldiers die. He also cannot shake the memory of hungry children in the streets of Europe.

"I wanted to go because I was a dummy," he said, laughing at his own naïveté.

"When they asked who wanted to receive special training, I raised my hand. That's where they taught me how to save or kill other people."

Silva was born July 8, 1924, as the second of seven children of Juan Dionicio Silva and Juanita La Grange Silva, and grew up in Socorro, N.M. As the oldest male, he says he was his mother's favorite.

"I was very spoiled. My mother tucked me in with blankets and doted on me," he said.

After completing eighth grade, Silva decided to join the Civilian Conservation Corps and was assigned to a camp about 10 miles from home. He thought his income would help the family, but his mother was putting the money away for him for use later.

He didn't own a radio or TV, but word filtered to him about the looming war. He persisted in his desire to go, even though his parents opposed the idea.

When the United States entered the war, he decided to enlist with a buddy. While his friend was turned away for being too young, 19-year-old Silva was accepted. He spent six months training at Fort Bliss in Texas, during which time his parents took a train to visit him. Finally, he was deployed to the battlefront.

Silva remembers a sense of innocence as he cruised on a boat toward war.

"On the ship, we talked and laughed. There were guys playing with decks of cards. We were not thinking about the war," he said.

Silva recalls the ship taking a frightening dive in turbulent waters at one point, and everyone on deck getting soaked.

In Europe, he became aware of the harsh realities of war. Days were spent hiking for miles across the land and defending fortresses. Often, they couldn’t bathe or change clothes for weeks at a time. And soon he began to see the carnage.

"I don't want to remember," he said. "At the Battle of Omaha Beach, the sea was full of corpses, all over the place. The water was red with blood."

As a rifleman with the 9th Division, Silva saw grisly images that continued to haunt him years later.

"I'm still in the war now," he said. "How do you think it feels to see a head here, a leg there and pure blood in the water? It's haunting. I can't get it out of my head."

In one battle, a fellow soldier, who was black, took a bullet meant for Silva.

"He was hit and fell on his belly. And by doing that, he saved my life," Silva said.

He also remembers moments in which he was overcome with fear. One night, while he was on guard and his fellow troops slept, he dozed off. When he awoke, he had the feeling everyone around him was dead and he was the only one alive.

"It turned out they were sleeping," Silva said.

Another night on guard he heard a strange sound. He imagined Germans were about to attack, but the noise turned out to be a cat.

Another time, his platoon was running and hiding in foxholes when he accidentally landed in a latrine.

"There were many funny things that happened, too," he said.

Silva says he never felt racial bias in the military. His peers nicknamed him "Pancho Villa" because he was the only Mexican American in the unit, but that didn’t offend him. Once, a fellow soldier insisted he not speak Spanish and Silva responded:

"We wear the same uniform. We are the same no matter what we speak."

Silva says he fought in the Battle of the Bulge, and was afraid because some German soldiers were disguised as Americans.

During his service, he was shot in the hip and foot, an injury that caused him temporary paralysis. He underwent surgery and had metal screws placed in some of his joints. He later was awarded the Purple Heart.

Silva tearfully recalls how the violence of the war affected him mentally.

"My head was numbed by war," he said.

Once in Germany, after being promoted to Sergeant, he attacked a man sitting in a restaurant until he was restrained by his friends.

Because of the attack, Silva was demoted from Sergeant to Corporal and lost his pay raise.

Before leaving Europe, Silva says he spent a year in Paris working at a camp. He signed up for the reserves during this time.

Once home, he struggled to find work, even though he took classes in carpentry. About three years later, in 1948, he married Betty Chavez and they started a family. When their first child was born, the Silvas had no money to buy food or pay the hospital bills.

"God helped me with everything," he said. "I had help from God because I was always at church."

Silva eventually landed a job at Kirtland Air Force Base in Albuquerque, N.M., as well as had employment as a janitor at various schools. He raised a family of four children -- Micheal, William, Philip and Melissa -- and became active with the American Legion and Catholic organizations such as the Knights of Columbus and St. Vincent de Paul Society.

Silva says his military service, though traumatic, also was a learning experience.

"Many things that I did not learn in school, I learned in the service," he said. "I really learned how to speak English better in the service."

When asked if he’d enlist if given a second chance to live his life, he answered, "yes."

"I guess I would be that dumb again," Silva joked.

Mr. Silva was interviewed in Albuquerque, New Mexico, on November 2, 2002, by Violeta Domínguez.