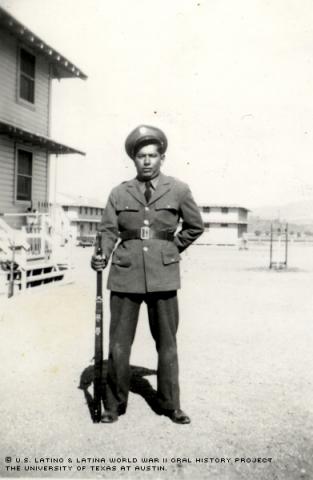 Miguel Pineda recalls Gen. Douglas MacArthur trying to inspire him and the other inexperienced soldiers upon their arrival in Brisbane, Australia. Pineda, 21 at the time, remembers MacArthur saying: "You kill him or he'll kill you!"

That was the defining moment when the reality and hardship of war and death hit this young man.

Pineda was no stranger to hardship. Born and raised in Austin, Texas, he was one of eight children. Although he was privileged enough to have attended school up to the sixth grade, he soon had to quit to start working and help with family expenses. He worked for the Calcasieu Lumber Company, which also employed his father and older brothers. It was while working for this company that the able-bodied young man received a letter stating he’d been drafted into the United States Army. While saddened by the news, Pineda and his family accepted this new obstacle and faced it together.

Pineda was inducted into the Army on Nov. 14, 1941, at Fort Sam Houston in San Antonio, Texas. Before he was even able to see any action, however, he suffered an appendicitis attack. He received an appendectomy and was put on limited service while stationed in San Antonio, allowing him to recuperate and be close to his home in Austin.

Pineda remembers being granted permission to visit home for a short time. He also remembers people inquiring about his quick return.

"Pineda, what are you doing here?" and "How come you're not out there fighting?" Pineda recalled them asking.

He would merely respond by telling them he’d been sick and was still recovering. He didn't let the criticism get to him and enjoyed the added time he had to spend with his family.

That time soon came to an end, however, and he was sent to basic training in Camp Roberts, California. Although he was only supposed to be there for a period of three weeks, he recalls staying there for a total of about three months.

"They needed companies of about 200 men, and they couldn't get enough men," Pineda said. As a result, he and others waited until they had enough men to ship to the South Pacific.

Pineda’s company was shipped to Australia, where he heard General MacArthur and other generals speak about what they were about to encounter -- war. It was on this island that the newly arrived infantrymen would receive more basic training.

"We had bush, what they call 'jungle training,' 'bush training,'" Pineda said. "They brought us some machetes and we had to cut bamboo and all that, too."

This allowed them to practice in the environment where they would stay for an indefinite period of time. Their first days in Australia were filled with drills and 100-mile hikes, providing a taste of what was to come. During this time, he and others contracted malaria: High fevers, sweating and shaking were only some of the symptoms they had to fight. Since they were in the jungle for long periods of time, they were constantly susceptible to this deadly disease. As soon as they showed signs, they were treated with drugs such as quinine and sent back to the jungle.

After some time training in the jungle, Pineda’s company was sent to their first battle in New Guinea -- the Battle of Buna. Japanese soldiers wanted to take over Port Moresby in Papua New Guinea to gain control over the island. In order to protect the area, the troops were instructed to occupy "pillboxes," which were machine gun nests in the ground. While patrolling the area making sure there were no signs of enemy soldiers, they were given orders to pull back.

"The officers made a boo-boo," said Pineda, recalling that horrible day.

While the American soldiers retreated, the Japanese soldiers moved into their territory and hid in the pillboxes, waiting for the Americans to return. When Pineda and the others returned, they were ambushed by the Japanese in a crossfire of bullets. He remembers bullets flying everywhere, but one had his name on it, hitting him in the left calf muscle after ricocheting off a palm tree.

"The nerves were sticking out ... like when you cut the head off of a chicken," Pineda said.

He recalls suffering unbearable pain, and his leg feeling like it was the size of a telephone pole. Fortunately, however, he wasn’t critically injured and received first aid while out in the jungle.

He also remembers receiving help from the natives of the island.

"They made a stretcher out of bamboo" and helped carry him out, he said.

Pineda was transported out of the jungle and waited two or three days before getting sent to a hospital in Port Moresby. The wound was severe enough to keep him immobile for the next nine months; throughout that time, he was transported to different hospitals in Australia, but not to the States, as he’d hoped. The injury caused him to be immobile for so long that he had to receive rehabilitation therapy to relearn how to walk.

During this time, he was informed he was awarded the Purple Heart for his part in the Battle of Buna.

Upon recovering from the bullet wound, Pineda was put on limited duty once again. His injury had been severe, and he still hadn’t recuperated well enough to be sent back out on infantry duty. Instead, the Army decided he could be useful in the military bases in Australia. His new jobs included unloading cargo, driving trucks and refueling vehicles around the military bases.

Soon after, he was sent to the frontlines in Leyte, Philippines. It had been about 30 days since the U.S. invasion. He hadn’t been there long when his commanding officer gave him an option: He informed Pineda he’d have 45 days to decide whether he wanted to re-enlist or go home. His time for deciding was cut short, however, because he began to suffer from more malaria attacks and ended up at Brooks Army Hospital in San Antonio. While there, he was given a complete physical and it was discovered he also had hookworm and suffered from nervous attacks.

It was during this hospital stay that he received some good news. He recalls a nurse coming into his hospital room and telling him he was out the Army. He asked her how she knew, and she responded: "'The war is over in Germany.'"

Upon hearing the news, everybody started jumping, hugging and kissing in elation, Pineda said. The war was finally over, at least in Europe.

Pineda was discharged from the Army on July 1, 1945, at the rank of Private First Class; he returned to Austin and moved back in with his family. The war had been stressful on him, Pineda said, so he decided to take it easy when he came back home.

He laughs as he remembers taking advantage of the "52-20," a federal program in which discharged soldiers could receive a check of $20 for 52 weeks. Needless to say, Pineda took advantage of this program and adjusted to life in the States once again. After his time in the program ended, he returned to his old job as a laborer at the Calcasieu Lumber Company.

"I asked her, 'Hey, do you want to dance with me?' and she said yes," said Pineda, fondly recalling how he approached her.

At the time of his interview, Pineda lived in South Austin with one of his daughters and was enjoying retirement, spending his days at a Senior Citizen's Center and his evenings at home.

Mr. Pineda was interviewed in Austin, Texas, on March 9, 2001, by Sandra Ibarra.