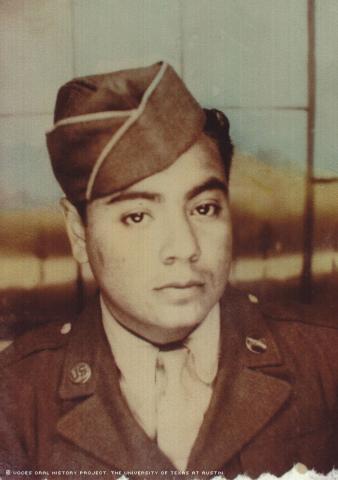 While he sat in his foxhole, 23-year-old Mike Morado was scared and cold, and wondering if he would survive World War II or even make it to his 24th birthday.

Little did he know that his moment of fear and apprehension would become a pivotal event that would shape the way he lived the rest of his life. Because of that moment, Morado decided to devote the rest of his life to doing volunteer work. He said his experiences in WWII taught him to appreciate life and give back to society as much as he could.

"I was up at the mountains, looking up at the sky, and I remember my mother had said that there was a God somewhere. And I thought maybe he was there, and I said, 'If you're there, I want to go home. That would be so nice,' and I made a desperate promise that I would spend the rest of my life doing volunteer work," Morado said.

In the 60 years since then, he has kept his promise, becoming involved in many volunteer activities and organizations.

Morado was born in Dodge City, Kansas, on April 12, 1921. He was the third of the five children of Juan Morado and Rosa Rivera, both from the town of Romita, in the Mexican state of Guanajuato.

He said that in his early youth, he found the idea of serving in the U.S. Marines entertaining and fascinating. But the years he served in the war were not pleasant ones even though his experience benefited him in the long run.

"Everybody was going into the Army, and I wanted to go in and I heard the Marines were the most elite," Morado explained.

When he was drafted into the Army, Morado said, "I felt happy. I was finally going to go into the service, have a uniform and a girl on each arm," he said with a chuckle. "It didn't turn out that way."

His height initially kept him from joining the Army, but he was drafted two years later. That was a blessing from God, Morado said, because his friend who had enlisted earlier did not make it out of the war.

After undergoing training in Camp Claiborne, Louisiana, and Camp Howze, in Texas, Morado was deployed to the European Theater as part of Company K, 410th Regiment, 103th Infantry Division.

Coming face to face with the reality of war was a surprise to him.

"After I got in, I was sorry," Morado said. "Over there you go hungry, and you couldn't eat for days. It was no fun, but I thought it would be fun. It was a lot of hard work and suffering. You live and learn."

"I didn't say anything. I didn't have to. I guess they knew what a guy had to go through," Morado said. "Anytime you talk about it, you feel you're reliving the experience."

He did recall the time when he was told he would be going home. Morado said that day was the first time during his service that he let himself cry, although the tears were tears of joy. He remembered the time when he doubted that he would make it out of the war and when he so desperately asked God to send him home.

"We started to get close to New York Harbor and I could see the Statue of Liberty, and I said to myself, 'Wow, I think I made it,'" Morado said. "And it was about eight days before my 24th birthday. It was the best birthday I ever had."

Morado, like many other WWII veterans, had a difficult time adjusting when he returned home. He was overcome with guilt for things he had done during the war and was unsure of how to get forgiveness. He endured two years of alcohol abuse.

An encounter with a priest who was also a WWII veteran made him come to terms with his life. That was when he decided to fulfill his promise of dedicating his life to volunteer work.

"I realized that ... I was not improving and not doing anything profitable or good for anyone or myself," Morado said. "I remembered I had made the promise to God that if I got home safe, I would do a lot of volunteer work, so I started volunteering."

From that point on, Morado contributed any way he could around his community and beyond. He joined a variety of organizations including the American GI Forum, The American Legion, and the Disabled American Veterans Organization.

Morado also co-founded the organization IMAGE, which stands for Incorporated Mexican American Government Employees. The organization was created in 1972 to promote the hiring and equitable treatment of Latino employees in government agencies. Morado acted as IMAGE regional director for the Midwest.

"In a war you destroy, and I wanted to rebuild when I came back," Morado said. "You should use your life to do good, to help other people."

Morado emphasized that without his war experience, he would not have become the man he turned out to be. His experiences taught him to appreciate life and to be humble and grateful for everything good that happened to him.

"I feel good when I can do something good for someone," Morado said. "I have had a lot of good things happen to me. Maybe it's because I did some good things, sometime, somewhere, to someone, and I feel at peace with myself."

Mr. Morado was interviewed by Valerie Martinez in Kansas City, Kansas, on June 17, 2010.