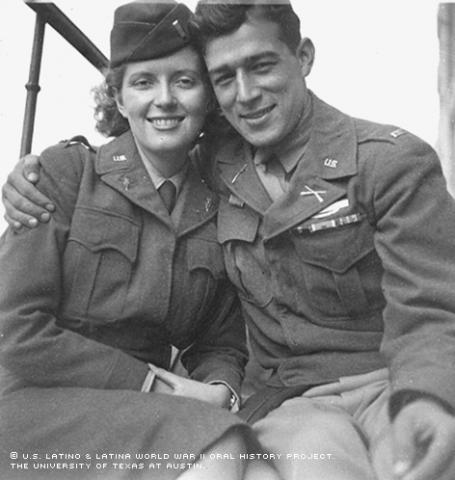 Miguel de la Peña’s first injury in World War II landed him in the infirmary for two days. His second injury landed him his wife of 58 years.

After first suffering a concussion at Normandy, de la Peña was wounded by another artillery shell in Bretagne, France. He ended up in a hospital in Taunton, north of Liverpool, England, where another injured soldier persuaded him to go on a double date with a nurse there.

"I met her on a blind date and I became blind right away," de la Peña said.

The "her" in question was Ruby White, now Ruby de la Peña. Ruby, a Canadian, worked as a registered nurse at the infantry hospital.

"Her smile attracted me primarily," said de la Peña, holding a photograph from the day they first met. "I saw the guys that she took care of. They really cared for her a lot, but not as much as me."

Two months after they met, de la Peña asked Ruby to marry him. They spent the next few months apart, as de la Peña rejoined the 23rd Infantry unit in Belgium and crossed the Rhine to Leipzig, Germany. He was in Czechoslovakia when the war ended and was granted leave to go see Ruby in Verdun, France, where she was working in the 101st General Hospital.

On June 25, 1945, De la Peña and Ruby were married, twice. They were wed by the mayor of Verdun in a civil ceremony that morning, and by the Catholic chaplain in the Cathedral of Verdun in the afternoon.

"While we were in the church getting married, she reached for my hand because hers was shaking and she said, 'You're an old combat soldier, you'll give me strength,' but my hand was shaking more than hers," de la Peña said.

When the newlyweds returned from Europe, de la Peña, who’d entered the Army in 1942, met Ruby’s family in Michigan and took a job at a local bank. He never liked his job there and felt he belonged somewhere else.

De la Peña re-enlisted in the Army in December of 1948, and stayed on active military duty until his retirement on April 1, 1967. During those 19 years, he fought in two other wars, Korea and Vietnam, and left the Army at the rank of Lieutenant Colonel.

The two came from different worlds. Whereas Ruby spent her years before the war in Windsor, Canada, speaking English, de la Peña was the son of Mexican nationals, spending his childhood in Mexico, Milwaukee, Wis., Peoria, Ill. and San Antonio, Texas, speaking only Spanish until the fifth grade.

De la Peña, one of eight children in his family, left home at an early age because he was very independent. While working as a clerk at Hotel Monterrey in Monterrey, Mexico, he became interested in the conflict that was becoming WWII.

At the time, Mexico had been targeted with propaganda by both the British and German sides. De la Peña remembered seeing German propaganda that was a picture of a bulldog, which could be folded in certain ways to produce a picture of Winston Churchill.

"But the British were smarter," he said. "They had a picture of Hitler that if you folded it in, you had a rear end of a donkey."

When it became clear the United States would enter the war on the side of the British, de la Peña received a letter from his father, reminding him he’d grown up in the U.S.

De la Peña tried to enlist in the U.S. Army in 1941, before war had officially been declared, but was rejected due to his relatively poor vision. Leaving home at the age of 17, he spent the next year as a member of the California State Guard.

Once the draft began in 1942, the military became more accepting of minor conditions, such as de la Peña’s eyesight, and, Uncle Sam allowed him to enlist.

After his infantry training took him from Los Angeles to Wisconsin to Georgia, De la Peña and his unit landed in Northern Ireland, reaching the shores of Normandy the day after D-Day.

"I can't describe it. You know you're in danger, but you can't be terrified because then you're helpless," de la Peña said. "You go out there, you lose people, you feel bad about it. You shoot people; they shoot back," he said. "What else is there?''

A veteran three times over, de la Peña feels strongly about the country in which he grew up.

"Ruby's from Canada. She's an American," he said. "I came from Mexico. I'm an American."

For their 50th wedding anniversary, the de la Peñas took a trip to Europe and visited the landmarks of their past. The hospital in Somerset and the mayor's office in Verdun were still there, half a century after the end of WWII, like the de la Peñas themselves.

"There's a song in Spanish that has to do with our marriage," de la Peña said. "'I love you more than yesterday but less than tomorrow.'"