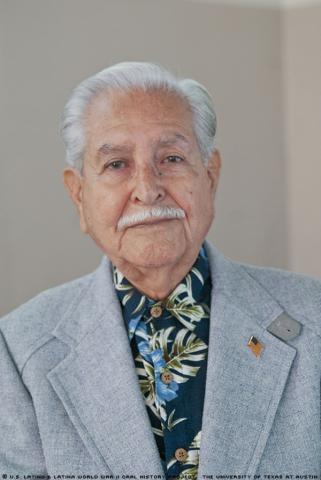 Maximino Rodriguez, who was 91 years old at the time of his interview, was unable to remember some of the details of his experiences, such as when and where he was wounded. But he clearly recalled other moments of hardship and tragedy. Rodriguez, a Mexican immigrant, was drafted in 1942 at the age of 21, shortly after the bombing of Pearl Harbor. It was not until Rodriguez received his draft card that his father realized the significance of World War II. Rodriguez’s father wanted him to move to Mexico to avoid going into the service.

“I realized that I had a lot more opportunities growing up in the United States than my parents ever had living in Mexico. I can consider this country my own,” Rodriguez said. That is why he decided to fulfill his patriotic obligation.

After basic training at Camp Roberts, near Paso Robles, Calif., he was sent to fight in Naples, Italy, after the U.S. invasion of the Italian peninsula in 1943.

“At least I found Italy friendly. They [Italians] even gave us booklets to translate,” said Rodriguez, recalling his arrival in Italy. Rodriguez also said the U.S. soldiers had an opportunity to go to a village where Italians prepared food for them.

“The people in Naples were not afraid of the war, so a lot of the houses were open to us [soldiers]. They served us Italian meals and glasses of wine were served over water, and of course we guzzled down on wine,” Rodriguez said with a chuckle.

Despite the pleasant welcome he was still in a war zone and was prepared for combat as a mortar man. He recalled one time when his unit, the 338th Infantry Regiment, 85th Infantry Division was called into battle.

“There was a small scrimmage outside of Rome; one of the areas we were going through was behind a hill. That was one of the toughest battles I ever saw,” he said.

According to Rodriguez, about a third of the 240 soldiers in the battle died in combat.

“We lost a lot of people there, because it was called an element of surprise, which meant, before they pulled back, they threw everything they had at us,” said Rodriguez.

“When we lost all the men who were killed or wounded, it made it a lot more difficult to comprehend the war activities... It reminds you of the hazards of war” he said calmly.

Rodriguez vividly recalled seeing the dead on the battlefield.

“When the dead bodies were out on the field, they would swell up because of the heat, and the people who were supposed to pick up the bodies would have to shoot the bodies, so they could pick them up, or else the bodies would blow up and explode. Those were some of the horrors of war,” Rodriguez said.

But things changed for him. Rodriguez was wounded in a battle in 1943, although he was unable to remember the exact date. His weapon accidentally discharged while he was cleaning it. He was struck in the leg; his shinbone was shattered. He was sent to a field hospital and was then transported to Rome, where he stayed a few weeks. He was then sent to Naples as the Allied Forces were preparing for the Normandy Invasion. On June 6, 1944, the Normandy Invasion began, and the Naples harbor was cleared to bring in the hospital ships to transport Rodriguez and other wounded soldiers to Charleston, S.C. He was then sent to Sheppard Field, near Wichita Falls, Texas, to be discharged but his leg became infected. The officer in charge decided the hospital could not save the leg, so they scheduled an amputation. But luckily, a surgeon believed the leg was salvageable.

”If he wants to stay here long enough, you can cure that leg,” he recalled the surgeon saying.

“I accepted that my leg was going to be amputated. But I didn’t have much to do, besides going home, and I didn’t want to go home with a missing leg,” Rodriguez said. After the surgery, it took about seven months for him to recuperate. Rodriguez was happy he would be able to make a safe return home without severe physical disabilities.

While at Sheppard Field, he married Margaret Silva. When they returned to his hometown of Los Nietos, Calif., his wife was preparing to give birth to their first child, Grace. Later they had four other children: Yolanda, Daniel, Desiree, and Michael.

In returning to civilian life, Rodriguez used the GI Bill to help pursue an education. He was limited to certain jobs because he was unable to stand on his right leg for long periods of time.

Rodriguez applied to trade schools and trained in jewelry and watchmaking, since that job would allow him to sit. He would later use that knowledge to open his own jewelry store in Pico Rivera, Calif.

Rodriguez felt that, by being a Hispanic veteran, he was more accepted and faced less discrimination. Despite the horrors that he saw during the war, he also recalled positive aspects of his experiences.

“I was satisfied with the activities and fortunate that I didn’t stay in any foreign countries, or died. But I accepted the war as a duty for the country,” Rodriguez said. “Going to the war made me aware of the good things this country has.”