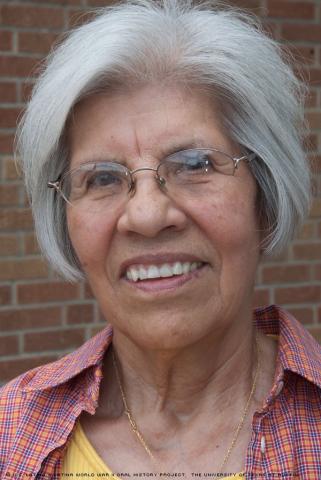 Mary Patricia Torrez Rangel knew there were places in Topeka, Kan., where Latinos were not allowed to go -- swimming pools, movie theaters, and restaurants. She simply refused to obey the restrictions.

“You know you have to speak up. I don’t like to be pushed around,” Rangel said.

Rangel is the daughter of Marcario Torrez and Guadalupe Thomasa Gutierrez de Torrez, both from Guanajuato, Mexico. Her father’s family came to Topeka in 1917 and worked for the Atchison Topeka Railroad company.

Rangel was the third child in a family of four girls and four boys. The family lived in a tiny house on a farm owned by an Anglo. Rangel recalled how she had to sleep on the floor every night with her siblings.

She remembered that she and her sisters “only had two dresses,” and they would alternate days of wearing and washing them. They were poor but they were raised to be proud. “We were not allowed to leave the house with a single wrinkle in our dresses,” Rangel said.

When her father began struggling with diabetes, it greatly affected the family’s income.

“My sisters dropped out of school to work … and my dad -- he was so proud he refused to go to welfare,” she said.

Rangel remembered how her mother shielded her children from discrimination by limiting what they could do and where they could go in town. Her earliest recollection of prejudice against her family was when her brothers wanted to go swimming. They were not allowed into the pools around town so they would just swim in a creek near their house.

As Rangel grew older she grew bolder about her rights. She never joined a formal movement, but she staged mini-protests of her own. When her friends would tell her, “No, we can’t go in there,” or “No, we can’t sit there,” Rangel said she would do it anyway. She spoke proudly of her defiance against the social order.

“Stand up for your rights,” said Rangel. “Stand up for who you are. No matter if you are a boy, girl, black, Mexican, no matter what -- you are an American, and you should be proud of that.”

Despite the difficulties, Rangel did not let it stop her from enjoying and making the most out of life.

Rangel said she grew up in a household where work was valued over education. She was the first in her family to go to high school, and it wasn’t easy. “No books, no pencils -- my mom and dad were so poor,” said Rangel, “I tell you, it was rough.”

Rangel walked a mile across town to attend Our Lady of Guadalupe Catholic School. There, she and her classmates were taught by Anglo nuns.

“We were not even allowed to speak any Spanish at school,” said Rangel. She had to quickly learn English, and her father and her classmates helped her overcome that language barrier.

This would enable her in later years to understand the English radio broadcasts reporting on the Korean War. Her family couldn’t afford newspapers or their own radio, so they listened to their neighbors’ radio.

Rangel was anxious to hear any news from the front because her boyfriend, Felipe “Pipes” Rangel, had been drafted into the Marines and was fighting in Korea. When “Pipes” (his nickname ever since his brother tried to pronounce his name) was sent home after being wounded, he quickly asked Mary to marry him. She agreed, and they married on Oct. 23, 1954.

Rangel said that it was difficult for her husband to deal with what he had seen in combat. She remembered many of his “episodes” that would last up to 20 minutes at night. To comfort him, she would hold his hand or stroke his arm until he calmed down. Post-Traumatic Stress Disorder plagued her husband for years, and she said it was long time before he could share his memories with his wife and children.

Rangel has a family of her own -- four daughters and a son who have all benefited from her strength and persistence toward attaining an education. Each of her kids graduated from high school and went to college. She’s taught them all to stand up for what’s right.

“And now I’ve got kids like me, and they don’t get pushed around either.”

Growing up through times of depression and war may have toughened Rangel. More than just being a proud Latina and the proud wife of a Latino veteran, Rangel is a proud American.

Mrs. Rangel was interviewed at Our Lady of Guadalupe Catholic School in Topeka, Kan., on June 16, 2010, by Valerie A. Martinez.