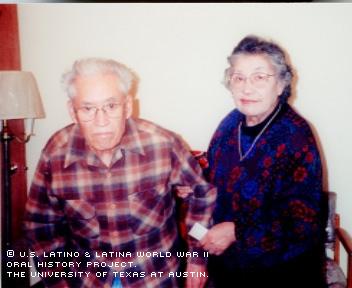 Austin resident Mary Resendez remembers exactly where she was on Dec. 7, 1941, the day the Japanese bombed Pearl Harbor: where she usually was on Sunday -- at Mass.

"We heard [about the bombing] on a Sunday at church," said the 74-year-old Resendez, who was 14 when World War II broke out. "We just prayed to God that it (the war) wouldn't come over here. We knew that the country was in war and there was gonna be a lot of changes."

In the course of a war that did bring many sweeping changes, religion served as the greatest constant for a woman whose down-to-earth lifestyle would eventually center on a career, a family with three children and a long-lasting marriage.

A weekly visit to San José Catholic Church in Austin continues to help Resendez, who retired after 46 years in the Austin laundry industry and whose husband suffered two strokes, highlight the happy, 52-year marriage she enjoys today.

Mary Colunga Carmona Resendez was born on April 9, 1927, in Austin, Texas. She was the second of eight children born to Deciderio Melendez Carmona and Carman Vela Colunga Carmona, who married in 1924.

Resendez's father, a barber and part-time local musician, rooted the family in Austin after buying a piece of land and a house on South 5th Street in 1929.

The family maintained a regular income on average throughout the Great Depression, thanks in large part to her father's barbershop on West 2nd Street, which he owned and operated.

"Anything was good enough for us," she said, referring to the comfortable lifestyle of her family.

The fringe benefits of the barbershop were good, too.

"[My family] would wait for haircuts," Resendez said. "Anything was good enough for us."

Resendez dropped out of school after the fifth grade, something that was commonplace for many Mexican Americans at the time.

The early exit from school allowed Resendez to help her mother care for her younger brothers and sisters, and permitted her more time for her two childhood enjoyments: Western movies and going to San José Catholic Church.

The trips to the Capital Theater to watch the latest Westerns were less frequent than regular Sunday visits to church, which peppered her weekly routine and became a custom.

What Resendez didn't know at the time was that those church visits would become extremely important in the next phase of her life: world war, work and her parents’ separation.

In 1941, Resendez's father moved the family to Big Spring, Texas, to establish a barbershop. The family continued in their faith, attending the local Catholic church.

Later that year, the priest in Resendez's new church would announce to his congregation that the United States was entering World War II.

"To us, we didn't even know where Pearl Harbor was," Resendez recalled. "Everything seemed so far away ... not like it is today, when we know everything when it happens."

Still, the 14-year-old girl was eager to aid the war effort on the home front. She participated in her church's recycling program, aimed at providing additional materials for the manufacturing of weaponry.

"We'd open the [tin] cans on both sides, and then put the lids in the middle of the can and then mash it down," Resendez said. "They picked [the cans] up or we took them to church in bags, and somebody would take them."

Can-smashing efforts in Big Spring eventually faded as her parents’ marriage dissolved into a mutual separation in 1943.

"They did not divorce. They separated and we had a choice to either go with him or her, and I said, ‘with her,’" Resendez said. "And we all followed my mother."

The family returned to Austin without their father, who stayed in Big Spring.

With only partial financial support from their father, the 16-year-old Resendez was almost obligated to apply for work.

"They needed a lot of help, so I went to work," Resendez said, referring to her family. "They wanted all the girls to help."

That job -- pressing and drying clothes -- eventually lasted for 10 years, during which she continued to attend Catholic Mass on a weekly basis.

It's a good thing she did, or she wouldn’t have crossed Frank Resendez's path at a church wedding.

"There was a wedding for a friend of ours ... [Frank] was outside and I saw him and he saw me, and he invited me to go and dance with him," Resendez recalled. "So, we got us a dance partner ever since."

The couple married in 1949 and had three children: Rudolpho, Mary Frances and Gerardo.

In raising her family, Resendez began to notice differences in the lives of Mexican Americans today compared to the time in which she grew up.

And, it's all about schooling.

"Everybody's getting educated. [My children] finished high school, all three of them," Resendez said. "The people used to be real poor, and they're still poor, but it's gradually going up."

Resendez switched from Austin Laundry to Capitol Laundry in 1953, then to Anthony's Laundry in 1958, where she spent the next 31 years as a seamstress until her 1989 retirement.

"I was sick and tired of it," said Resendez with a laugh. "No, it's just that I was looking toward when I would retire."

Through all those working years, San José Catholic Church continued to be her perpetual home away from home -- so much in fact, that Resendez developed a theological model with which to pattern her life.

"To me and my point of view, you've got to have faith in whatever you do," Resendez said. "Just say, 'In the name of God, I'm gonna do this.'"

In July of 1991, Resendez was forced to do just that when her husband's stroke changed their lives forever.

Resendez and Frank, a World War II veteran who helped build airfields, had become lifetime members of the Catholic War Veterans of the U.S.A.

The group, a charitable organization dedicated to "God, country and home," became an enjoyable activity for the Resendezes. The couple would assist in local bingos and attend national conventions.

While planning the details for a 1992 organization-related trip, however, Frank suffered a second stroke that left him needing 24-hour care.

"He was real sick, and we were all in the hospital with him," Resendez said. "We left it with God. If it was his time to go, fine. And, if he was to survive, he was to survive. We were going to accept that because of my religion."

Frank survived, and Resendez has taken care of him ever since.

Perhaps because of her faith, the couple has sustained their marriage for 52 years, continuing to live at the same Austin address, near San José on West 2nd Street.

"He loves me," Resendez said. "We grow old together."

The only thing that could possibly eclipse her 46 years in the laundry industry and her 52 joyful years of marriage is her lifetime devotion to faith and Catholicism.

"It's had a good impact on us," Resendez said. "Hopefully, it's something that I'll never leave."

Mrs. Resendez was interviewed in Austin, Texas, on March 29, 2001, by Cliff Despres.