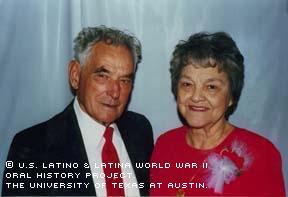 Martha Ortega Vidaurri learned at a young age the hardships that life could serve up: During World War II, all five of her brothers and her husband would serve in the country's defense.

Her brothers; Samuel, Daniel, Benjamin, Abel, Ruben and Eliseo; were spread throughout Europe -- in France, England, Italy and Germany; in North Africa; and in the Pacific -- the Philippines, Japan and Korea. Her husband, Edelmiro, was stationed in Iceland.

Because of concern about the secrecy of war plans, censors read letters and deleted information considered sensitive. To get around this, Vidaurri and her brothers created codes to communicate with each other.

Another time, one of her brothers wrote, "tell the boys to save me some Mexican beer." Vidaurri went through all the beers and figured out it was Cartablanca, so he must be stationed in Casablanca. This coding and decoding of letters went on throughout the entire war, and the Ortega family was able to track where each family member was at what time. The code was something that developed after they went off to war.

Vidaurri's husband, Edelmiro, was a G.I. and stationed at Fort Sam Houston and Randolph Air Force Base.

"He would hitch a ride home on weekends and we would spend time together," she said. "I remember we used to sing our favorite song, 'Stay As Sweet As You Are.'

"Then, on Sunday nights my mama would let me drive him back to the Congress Avenue Bridge, where he would hitch hike back to his station. This would be the only time I could be alone with him."

She said that any other time they spent together was under the supervision of her brothers.

"Maybe they knew what kind of guy he was," she said with a laugh. The couple was married 6 months after the war started.

Vidaurri said that even though it was difficult with all her brothers and her husband gone, her family managed.

To do her part in the war, Vidaurri collected scrap metal, and wrote letters to all the GIs she knew from church. One brother, Daniel, was killed in combat in France; her other four brothers and her husband returned home safely. Through all the difficult times, she knew her strong family would survive.

Vidaurri had a carefree childhood in Austin. She attended school and graduated from Austin High School. And she played many sports, including her favorite, baseball ... She was also very involved in the Methodist Mexican church.

"They [her brothers] always let me play baseball with them until other boys came around. Then they said, 'Martha, go home and help mama,'" Vidaurri recalled.

Martha was the sixth youngest in the family; her sister, Debora, was 10 years older.

Vidaurri had dreams of becoming a nurse, but after graduating high school, the war broke out so she stayed home to help her mother around the house.

After the war, Edelmiro and Vidaurri began their own family. They are proud parents of five sons and one daughter; they also have 15 grandchildren.

The couple keeps connected to their family with an established tradition of hosting dinner every Sunday night for any of the kids who want to come.

Favorite meals are very diverse with this group, but they always ask, "What's for dessert?"

Mrs. Vidaurri was interviewed in Austin, Texas, on October 3, 2001, by Tammi Grais.