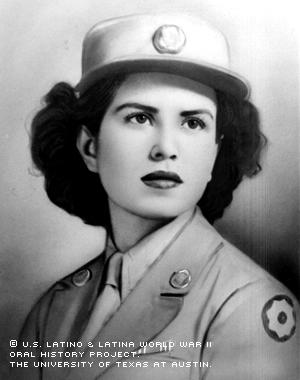 When Maria Sally Salazar illegally enlisted into the Army, she dreamed of traveling the world. She didn’t imagine, however, that her service would lead to six months in the hospital recovering from multiple illnesses and watching the end of World War II from bed.

"The war in '41 woke us up," Salazar said. "Everyone was talking about it. Everyone wanted to go."

Salazar's family was against her going, and at 19 she was too young to enlist without parental consent. Women who wanted to enlist at the time had to be 21, so Salazar told her parents she was going to visit her sister, took her older sibling’s birth certificate and went to San Antonio, Texas, with a group of girls and enlisted. She says she saw the beginning of the war as an opportunity to travel and see the world.

The entire time she was in the service, Salazar had to go by her sister's name, Amelia. And when she left, she had to hire a lawyer to correct the discharges, so she could have her own name and age.

Salazar grew up in Laredo, Texas, with her parents and four brothers and five sisters. Laredo is about 150 miles southwest of San Antonio. In school she was athletic, playing on the basketball, volleyball, baseball and tennis teams.

At the age of 16, she became pregnant. Her father forbade her to marry her child's father, so she could finish school. The child died six months after birth from pneumonia, and Salazar lost contact with the father during the war. She later found out he’d become a colonel in the Army and had married.

After returning from San Antonio, she managed to keep her enlistment a secret until her parents intercepted her acceptance letter. Her father wanted to report her, but Salazar's mother was afraid of the legal repercussions for assuming another's identity. So Salazar, under sister's name Amelia, remained in the Army.

After basic training, Salazar was sent to New Guinea from 1943 to 1945, and then to the Philippines, not quite living up to her dreams of traveling to Europe.

"They painted a very pretty picture. You will go here, you will travel there," Salazar said. "It didn't happen that way. We were stuck in a jungle for a year and a half."

Salazar was assigned to the Women's Army Corp and worked for the Surgeon General's office.

"Anywhere they needed us we worked, but mostly in the medical field," Salazar said.

She worked at a building they called the Pentagon Building, named after the one in Washington D.C. "The Pentagon" was the head of communication for the area. It was also the place where the numbers came in for wounded, missing and dead soldiers

"It was pretty hard because we knew, in the wee hours of the morn, the men were leaving to take an island, and with no supplies," Salazar recalled. "We did what we could."

The casualties were high in the area, and sometimes Salazar, who rose to the rank of Private First Class, was asked to help with the wounded men.

"Every time they told me, 'Private, come over here and help,' I just stood there, just looking. I don't think I heard anything," Salazar said. "Finally, I would go help. I was in shock."

The high stress combined with the lack of adequate supplies took its toll on many of the women, including Salazar. Along with several of the other women, she says she couldn’t stomach the food. She was reported for not going to the mess hall, punished for it and eventually forced to sign-in to the hall.

"But still I couldn't eat powdered eggs, canned meat, and I think the milk was powdered too. It was horrible," Salazar said. "As soon as we got there, everybody had lost weight."

Several of the women became ill, but nothing could be done. Penicillin was the only antibiotic available at the time, and all of that had to be sent to the front. Salazar says the women would sometimes be sent to bed for a few days to rest, but usually they had to keep going because everyone was needed.

By end of the war, Salazar was hospitalized in Manila, the capital of the Philippines, with several illnesses, including malaria, hepatitis and diarrhea. After the atomic bomb was dropped, extra planes and ships were used to transfer people back to the States, starting with those who were most likely to survive. Fortunately for Salazar, she was one of the first to go.

"We were sitting there ... thinking, 'How can you celebrate? Look at us,’" Salazar said.

Salazar received a medical discharge, but re-entered the service because her family couldn't afford to pay her medical bills. To this day, she suffers from five service-connected illnesses, including chronic hepatitis and anemic dysentery. She also suffered from depression during the war, and still feels the emotional impact of those times.

"My nerves, they just won't leave me," Salazar said.

After the war, she finished high school and attended Laredo junior college. She married in 1978 and put her three stepchildren through college on her benefits. She recently divorced.

Although the war was hard on her, Salazar says she doesn’t regret the time she gave and is proud of the awards and recognitions she earned.

"To me, it was an experience I would not change for anything in the world, because not just anybody can have that," Salazar said. "And my nightmares are with me, and my dreams are with me."

Mrs. Salazar was interviewed in Laredo, Texas, on September 28, 2002, by Nicole Muñoz.