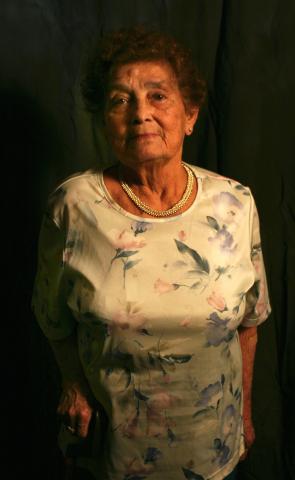 Maria Cristina [Pozos] Parra knows few details about World War II outside the stories her husband, Ambrosio Parra, chose to tell her, and a wound on his foot that left him in pain for the rest of his life. As she put it: “He told me a little bit, but he didn’t like to talk about [it].

Maria Pozos and Ambrosio Parra met in the mid-1940s at Randolph Air Force Base – located in Universal City, Texas, just outside San Antonio – when her supervisor asked her to escort Ambrosio, the new employee, to the base’s machine shop. Five years later, they got married.

According to his 2002 obituary in the San Antonio Express-News, Ambrosio retired from Kelly Air Force Base in San Antonio after serving 37 years. He also spent 20 years as an instructor at San Antonio’s St. Phillip’s College, where Parra said he taught the trades of machinery and welding, in which he engaged at Randolph Air Force Base before and after the war.

Maybe because he didn’t want to expose his wife to the horrors of war, Ambrosio would instead entertain their sons with WWII tales.

“It was beautiful for me to watch him with them,” said Parra of witnessing her husband’s storytelling to their sons.

In addition to Parra, Ambrosio shielded his mother from the war, even going so far as to throw the Purple Heart he earned overboard a ship, says Parra, adding that her husband’s mother was opposed to the war.

Ambrosio was wounded when the Suwanee, a Sangamon Class Escort Carrier, landed just off Nagasaki, Japan. He received a radiation burn on his foot, which never completely healed, says Parra, who cried as she told of the pain he endured his whole life.

While she didn’t experience WWII as first-hand as Ambrosio, the memory of the time period, especially the role men like her husband played, lives on in the changed attitudes and policies that resulted.

“There is more respect shown to Latinas now than at [the time of the war] because now Latinas speak up and listen,” Parra said, noting it’s now more common to see Latinos in U.S. government positions. “The respect came after the war.”